Greenock-based McGill's said it will launch its first service on the purpose-built bus route between the city centre and the new Southern hospital in Govan from May 11, around two weeks after the first staff arrive on site.

Managing director Ralph Roberts said the "high frequency" McGill's Fastlink will operate seven days a week between 6am and midnight.

Mr Roberts added that the bus industry would "not be slow to spot a need" for improved public transport amid warnings that some nursing staff were threatening to quit over parking shortages.

It comes amid concerns that the strict fleet criteria for vehicles operating on the Fastlink route was deterring commercial operators from committing to the service.

All Fastlink buses will carry the same branded livery regardless of the operator, and Strathclyde Partnership for Transport - the public body in charge of the service - has said all operators using the route must meet tough targets on emissions, vehicle cleanliness and customer service, as well as using only accessible low floor buses which are fitted with CCTV and smart ticketing technology.


McGills current services in the area are focussed on the Braehead shopping centre. (click on the map to enlarge) 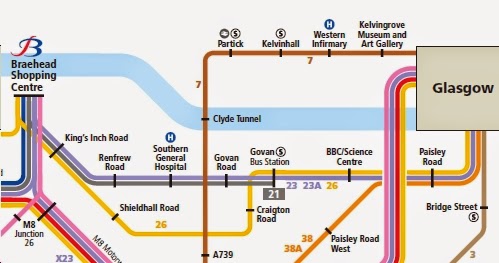 Service 7  runs every ten minutes Monday to Saturday (every 30 on Sunday) via Partick. It continues to Linwood.


Service 21  runs every 15 minutes Monday to Saturday (every hour on Sunday) from Paisley to Govan via Renfrew.

Currently these route pass "near" the SGH site.


Service 26  is currently irrelevant for SGH but does serve Braehead every 15 minutes (every 20 on Sundays) on its way from Nethercraigs estate via Pailsey and Renfrew; but runs some distance from SGH. 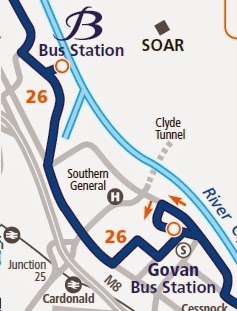 Despite this, the company lays claim to the 26 as an SGH route. 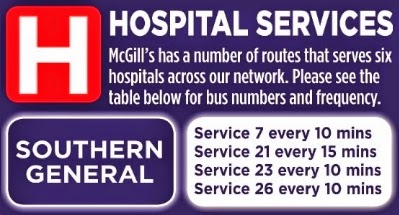 Frequency claims don't quite match the downloadable timetables; the catch-all phrase "up to" should be included.


The company web site is already flaunting its new pattern of services from 11th May.

A new  service 17  between Paisley and Glasgow, via the new SGH and Partick. The 17 will operate every 12 minutes, 7 days a week from 5.30am-midnight.

Glasgow bus watchers will know that the 17 is not new; it disappeared from the Arriva and McGill catalogue relatively recently. It is not clear whether this is in addition to or replaces service 7, but likely to be the former.


A new Fastlink service, the  SouthernFlyer , which will operate from Glasgow city centre to the hospital every ten minutes from 5.40am until midnight, 7 days a week.

Elsewhere on the current web site the new route is quoted as "F1". "McGill's will operate Glasgow's first Fastlink service, the F1 from Monday 11 May. The F1 will operate from Glasgow city centre to the new SGH (South Glasgow Hospitals) 7 days a week. Our timetable will be available very soon." 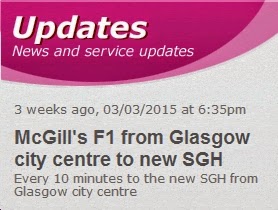 fbb wonders whether the delay in publishing the timetable my be because the infrastructure may not be ready until June.

Three existing services will see route amendments to allow them to serve the new SGH from the 11 May too. These are:

Service 21  from Paisley to Govan, via Newmains, Renfrew, Braehead and the SGH.

Service 23  from Erskine to Glasgow via Inchinnan, Renfrew, Braehead and the SGH.

Service 26  from Nethercraigs to Glasgow via Paisley, Renfrew, Braehead, the new SGH and Govan. 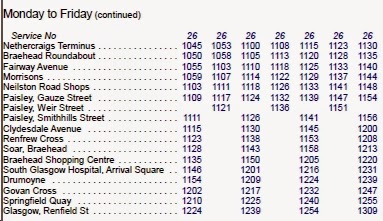 First Bus currently have only a modest presence at SGH. 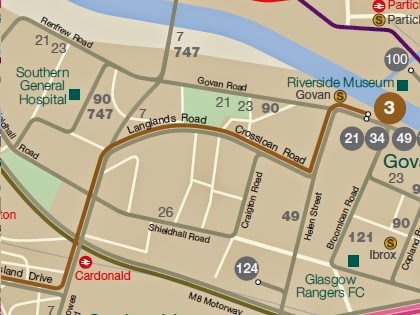 Route 3 is a service from the city centre following a large loop via Pollokshaws, Silverburn Shopping and Cardonald to Govan. 90 has its history wound up in former circular services but now starts from Partick and runs via Springburn, Hampden Park and Govan to Braehead but not via the City Centre.

That leaves the 747. This serves SGH, Braehead and Glasgow Airport and like McGill's 7 and new 17 runs via Partick and the Clyde Tunnel. It operates currently every 30 minutes. 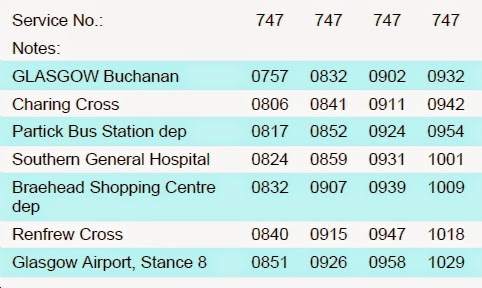 This service will be replaced from May 10th by  new route 77 running "up to" every 10 minutes.

Scotland's biggest bus operator, First Glasgow, today announced details of new Service 77 which, from May 10, will provide vital, direct and quick links from the city centre and the west end to the new South Glasgow Hospital and Braehead. The 77 will serve a number of communities including Charing Cross, Kelvingrove, Partick, Thornwood, Braehead shopping centre and on some journeys Renfrew and Glasgow Airport.

In what is a significant investment by First Glasgow, twelve modern vehicles will provide dedicated services on the route. All the buses will be specifically branded in a soon to be revealed Service 77 livery, and fitted with leather seats, free on board wi-fi and extra rooms for buggies and wheelchairs as standard.

The company also revealed that the 77 timetable is specifically designed to reflect visiting times and shift patterns of doctors, nurses and other staff at the hospital. Buses will operate seven days a week, commencing from the city at 5.20am on weekdays and 5.50am at the weekends, with buses from the hospital running until 10.48pm each day.

It looks very much like the old 747 with an enhanced frequency to SGH and Braehead.

We wait, with breath very bated, to see the timetable, the new livery and, specifically, how running times will compare with McGill's F1 and McGill's new 17.

One thing is certain - the level of expenditure on Fastlink (£40 million) has NOT gone down well with Glaswegians.

Frankly it is a complete waste of money (£40million for that!!), a crap design and it has added loads of traffic lights to junctions which never had any lights and made the road slower for everyone.

Who do SPT and GCC think they are where was the public consultation on this completely pointless exercise? This is the stupidest idea SPT have had since their last stupid idea which didn't work either.

Just been looking at the promotional video. Can we have bad taste bets as to how long until the first person gets knocked down by a bus on the "wrong direction" bit of the central bus lanes?

A couple of shots from the video illustrate "wrong way" running around bus stops built in the middle of the road. 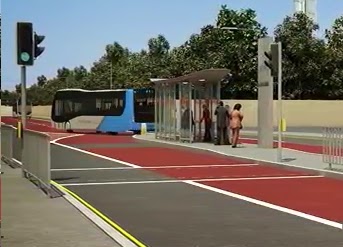 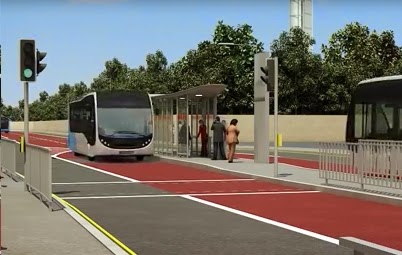 Scary and viewed as lethal by many!