A bit of a caper, see
All down the Drapery
Bus stops are being extended ... 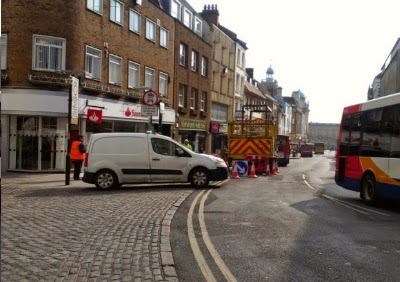 But Carol is far from happy! 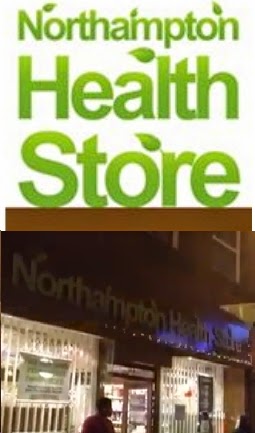 A Northampton shop-owner conducted a survey which has revealed negative responses towards the extension of bus shelters in the town centre, which began today.

Carol Faulkner, who opened Northampton Health Store in the Drapery in the town centre, last November, said the work had caused chaos along the street all morning and the whole project was a waste of money

She said: "I have conducted a survey asking people waiting for buses outside the shop for their thoughts on the extended bus shelters."

"They have all said that it's a bad idea because they are still unlikely to use the shelter and are more likely, instead, to continue standing outside the shops, blocking windows and doors. More than 60 people who commented on Miss Faulkner's survey said they tend not to wait in the designated shelters because they are uncomfortable and sometimes wet.

A purveyor of health food
Said "no gift of wealth would
stop me from being offended!"

"Folk won't use the sheltering
Unless rain is pelt(er)ing.
They stand in front of my shop.
The blockage is trying
'Cos no-one is buying.
This nonsense just has to stop!"

Furthermore, correspondent Alan sent us this picture and adds his comments:- 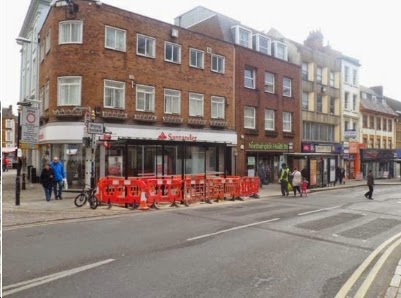 Is there are worse place to put an extra bus stop and shelter? The entrance to the left is the only access for deliveries and white van man to gain access to and from the busy Market. Buses using the new stop will inevitably block the access (or vice versa).

They're installing a new one
An all-round walk-through one
To block the market access.

And what stand number will it have? The next one down is 15 with 14 being part of the (actual) bus station. Stop 14½? Memories of Platform 0 at Kings Cross and Platform W at Leeds!

Then we'll be lumbered,
They'll all be renumbered.
It'll be a huge shelter mess!

There are also proposals to put two extra stops (with shelters) on Mercers** Row where buses always used to stop; where fbb used to catch his No. 1 to visit granny indeed. (Although not quite as long ago as this!)

There will be uproar again, not least at the loss of a few precious parking paces.

Where once plied the Mercers
There'll be lots more curses.
Two extra on there are proposed. 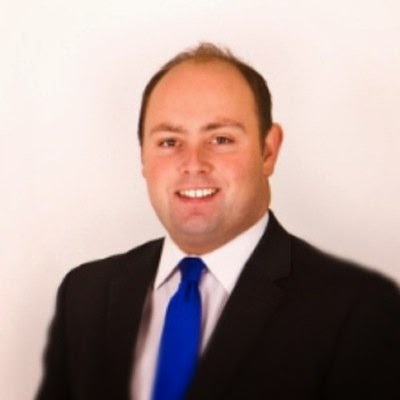 Oh, Councillor Macca
You are such a slacker.
It's time to have you deposed.

All of this activity is nothing more than shuffling a few chairs around on the bus station Titanic. The majority of comments in the local rag opine that Northgate is a disaster and, what's more, that Greyfriars should have been retained and upgraded. Too late now; but there is a large rubble-strewn plot joined to the shopping centre that is looking for occupancy. 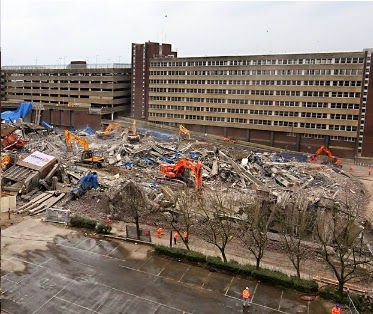 Nobody else wants it!

Many blogs ago, fbb suggested that Northgate should be turned into "boutique" shops. Now all we need is a proper bus station on the old site.

North Gate is a failure.
Greyfriars we hail yer;
Alas now heaps of rubble.
Despite alteration
There'll be consternation
Centre stops will always be trouble.


The Drapery is supposed to be buses only with very limited access to the Market Square from the north. Is this enforced? 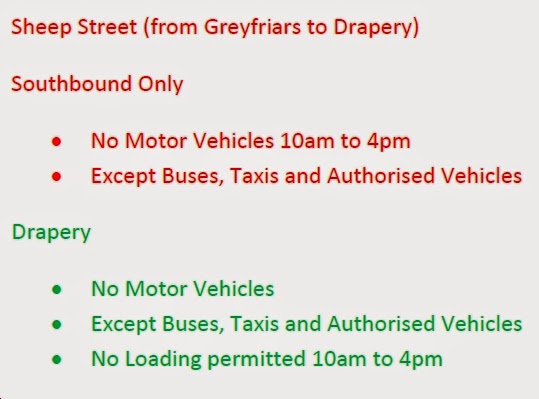 Despite promises from the authorities of "vigorous enforcement", the rules are still regularly broken. Note the unauthorised "blue van" unloading/loading between 10am and 4pm. Also note the plastic barriers to fence off a piece of road in which to park a shelter-extenders van. As a result please note the build up of traffic behind the bus. 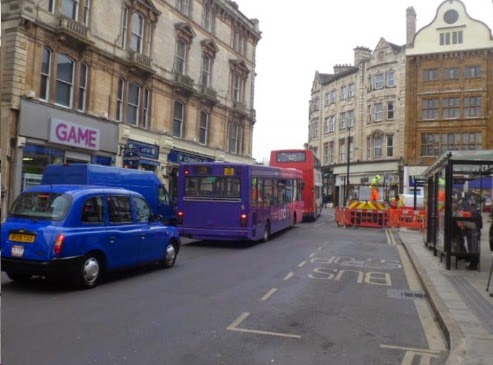 **Mercer - a trader who dealt primarily in textiles.
Draper - a retailer or wholesaler of cloth. 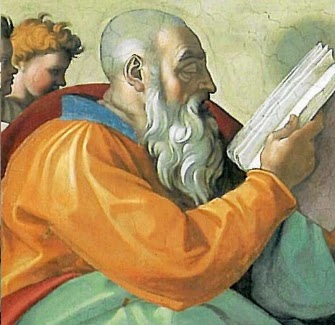 Zechariah was a weirdo. He had visions. Visions of grapes, chariots, lampstands, crowns and all sorts of crazy stuff. He lived about 450BC when his country (Judah, capital Jerusalem) was in a huge mess - and old Zech said so. The people had one hope; that Yahweh (their God) might do something about it.

Zech told them that there was no hope unless they obeyed Yahweh's laws; no hope unless they gave up sinning and did right and helpful things. But the people had heard it all before, on and off over the previous n thousand years. However hard they tried, they couldn't get "it" right.

One of his weirdest dreams was about a Messiah. God's chosen big cheese who would sort everything out.

The people though this big guy would be a military or political leader but Zech's vision was of a guy riding on a donkey! Big guys didn't do that. Crazee. 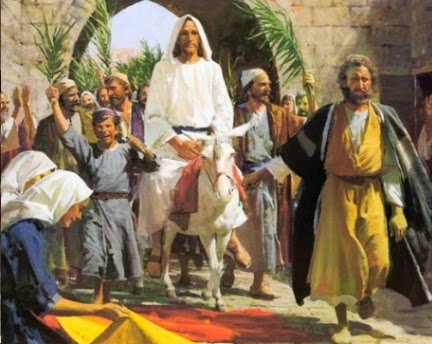 They went on their way and found everything just as Jesus had told them. As they were untying the colt, its owners said to them, “Why are you untying it?”

“The Master needs it,” they answered, and they took the colt to Jesus. Then they threw their cloaks over the animal and helped Jesus get on. As he rode on, people spread their cloaks on the road.

When he came near Jerusalem, at the place where the road went down the Mount of Olives, the large crowd of his disciples began to thank God and praise him in loud voices for all the great things that they had seen: “God bless the king who comes in the name of the Lord! Peace in heaven and glory to God!”

Next bus blog : Monday 29th March
Posted by fatbusbloke at 02:00