A somewhat distraught Mrs fbb alighted from her unwanted train to Exmouth at Exeter Central and sought advice. 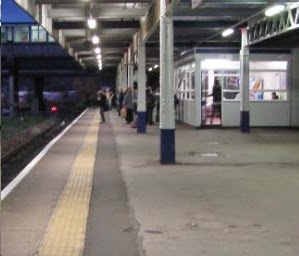 The man on the barrier listened and responded, "show me your ticket and I'll let you through the barrier." 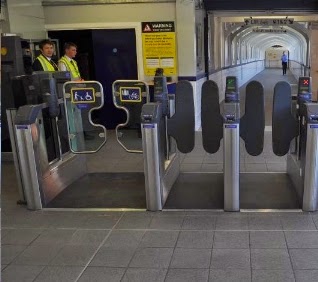 Which, of course, was no help whatsoever. She decided to walk back to St Davids in the hope of getting another train to Dawlish as fbb had said they were every half an hour. The less-than-helpful man-on-the-barrier told her to "go right" then left to get to St David's. 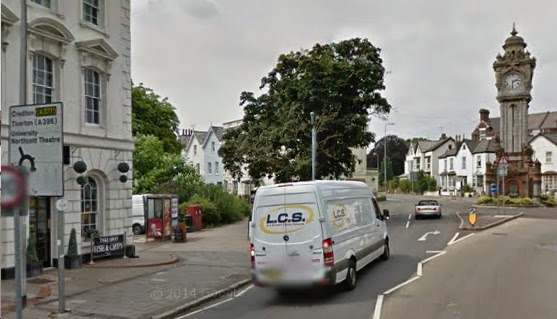 ... none at the clock at the end of Queen Street. So she went sort-of left here and kept going. But wrongly. Unfrotunately she missed the very mall finger posts until she got to the end of Streatham Drive (top left) ... 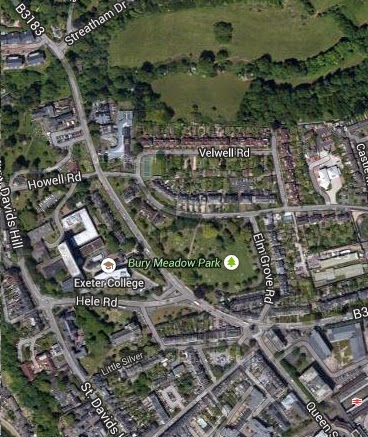 ... where she found a sign directing back from whence she had come! 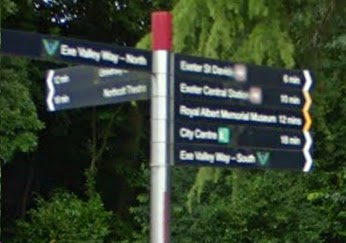 Thankfully some helpful local yokels directed her via Howell Road and a footpath and eventually she was back at St Davids. Hooray!

By now it was too late and too complicated to get to the meeting.

So she went home on the 1025 after two hours of fun and frolic at the expense of poor information on St Davids station. But not after nearly punching a series of railway staff who seemed to know nothing about trains except by prodding their tablets. But then they were First Great Western staff and the trains to Axminster are run by St*g*c**ch S**th W*st Tr**ns!

In a situation where confusion is easy, as at St Davids, surely the train dispatcher on the platform should be announcing which bit was going where and, BEFORE departure, the conductors of both split trains should make announcements and allow time for Mrs fbb (and others) to repent of their heinous transgressions. Or even have a signs that say "rear train" and "front train".

The railways served Mrs fbb badly on Monday, but, as she often says, "Public Transport is not for the public, it's only for regular travellers who know all the secrets."

Meanwhile, back at Exeter bus station, fbb is enjoying the comfort of a freezing waiting room with doors locked open and the heaters switched off. Welcome to Sragecoach! 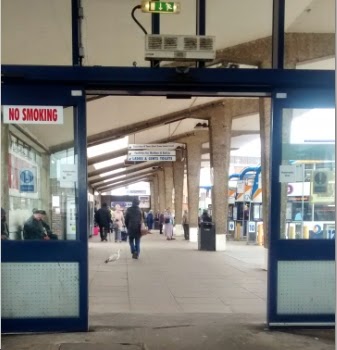 fbb was well pleased to see that the stand notices had all been updated to show the 6 and 6 ... 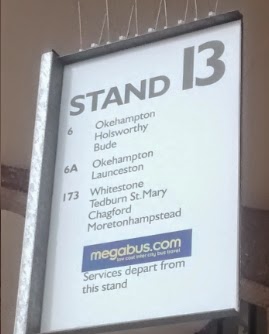 ... but less pleased to see that Stand 14 had been vinylled afresh ... 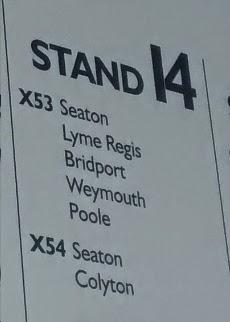 ... for the X54 which hasn't run for over 18 months. But then it is run by F*rst B*s and we have nothing to do with them. There doesn't seem to be enough room in the bus station; because service were regularly leaving from the wrong stands; here an X46 wrongly branded as Gold ... 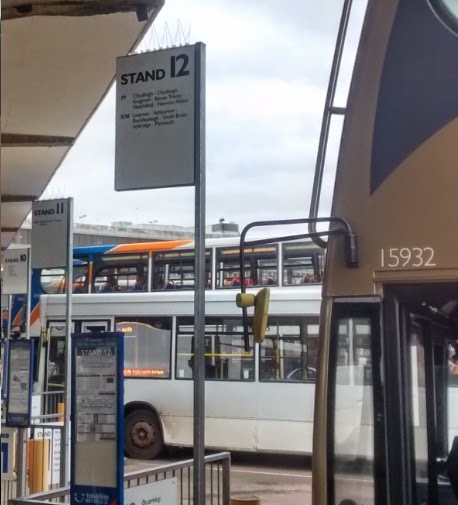 There was plenty of publicity in the excellent travel office but on closer examination the new 6 and 6A had not been added to the maps. Their predecessors (X9 and X10) remained. 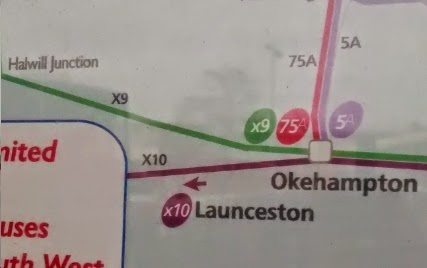 Can fbb treat Stagecoach to a felt tip fen?

Departure was scheduled at 1110 on Service 6 to Bude on a nice double decker which had arrived at 1055. 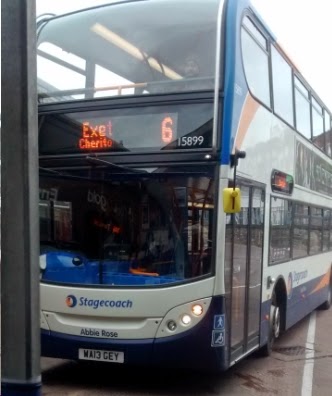 There was a delay before departure because a "senior" pass came up on the ticket machine as "not valid" when it was, palpably, valid. This bit of bureaucracy from the Council (presumably) is one of the daftest. Why should passes with a photograph ever be genuinely (as opposed to technically) invalid? The holder of the card is clearly the guy on the photograph and equally clearly an old crock. The Exeter delay meant that we left five minutes late and never recovered the lost time as we shall see.

But 6 and 6A journeys are, historically, all about the A30 and the Okehampton and Bude railway branch.

Service 6 follows the quicker route to Okehampton, mainly along the much improved, dualled A30. 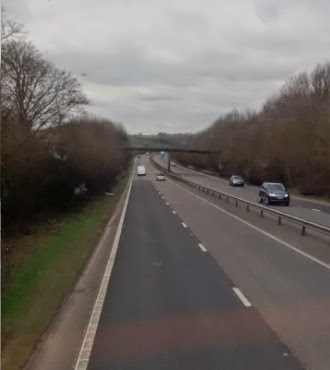 There is a brief diversion via the original A30, Cheriton Bishop and Crockernwell ...

... before re-joining the fast road to Okehampton. 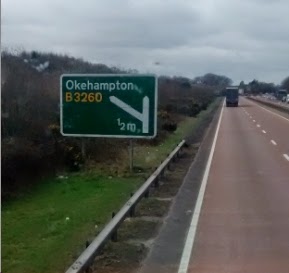 For these two villages the 6 joins the 6A (of which more later), the latter sticking almost entirely to the old road. The 1110 from Exeter deposited one solitary passenger at Cheriton Bishop otherwise its diversion was fruitless. Approximately 15 souls travelled at least as far a Okehampton including one interchanger with luggage from the train at Exeter St Davids.

What was encouraging was to see shiny new bus stop flags along most of the route (no stops on the A30 itself, of course!). 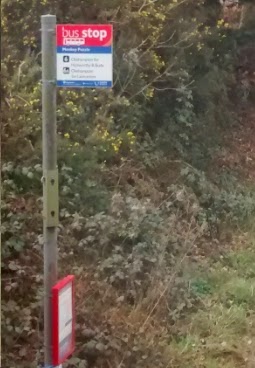 All the stops as far as Okehampton had new flags and timetable frames (with new timetables in then). First Kernow and Buses of Somerset please note where appropriate!

By now we were nearer 8 minutes late and the section to Bude offered less opportunity of "pedal to the metal".

The views from fbb's chosen top deck offside seat were glorious, possibly a little less than perfect due to cloud cover. An interchange of passengers at the West Street time point meant the run to Bude had a similar modest load.

All proceeded normally and, in places, as fast as the speed limits would allow, until an industrial estate near Stratton (a few miles before Bude) appeared on the starboard side. Alarmingly we pulled in, reversed and the driver tootled his horn. 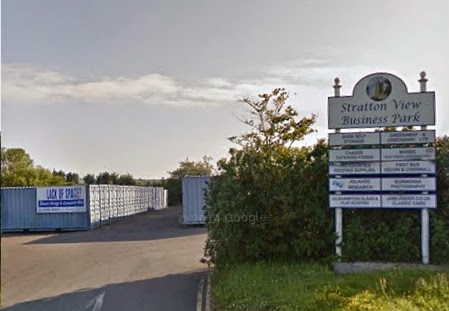 A change of drivers took place. fbb noticed a Stahecoach single deck parkeed in the extensive yard, so some clever scheduling had been necessary. ... was reduced to 3! There was no time for fbb to explore, even photograph, the stop; but observation suggested that all the publicity was up to date. This included the recent replacements following the sale of a chunk of Western Greyhound then its total collapse.

Go Cornwall (Plymouth Citybus) 576
renumbered 12 from April
Bude to Plymouth
which used to be First Bus 76! 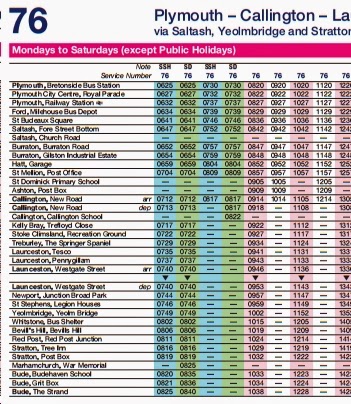 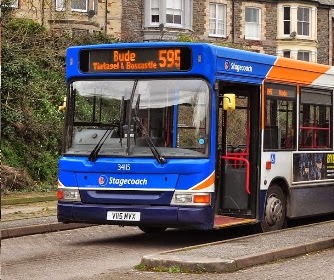 being the most significant of these.

For the record, these were the published times (summarised) for the journey from Exeter and back to Okehampton. 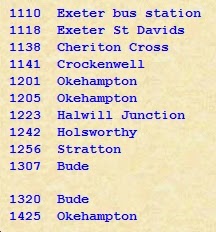 We will look at he run from Okehampton to Bude tomorrow with a passing glimpse at its former parallel, the London and South Western Railway's branch.


Next bus/rail blog : Friday 27th March
Posted by fatbusbloke at 02:00