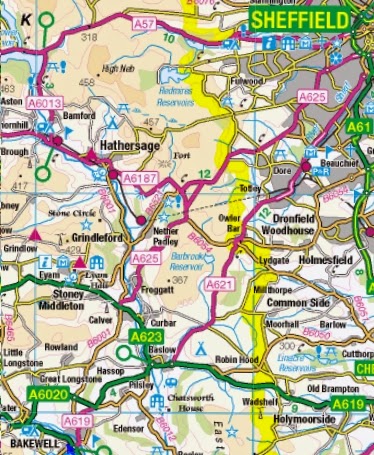 Back in 1952, Sheffield Joint Omnibus Committee ran two bus routes to Bakewell. Service 37 ran direct via Millhouses, Totley, Owler Bar and Baslow (A621). (click on these tables to enlarge)

7 journeys ran on Mondays to Saturday and 5 on Sundays. [SX means not Sundays]. Service 40 ran via Ecclesall and Fox House (A625), Nether Padley for Grindlesford Station, Grindleford and Calver Sough.

Here there were 6 on Monday to Friday, one extra on Saturday and 4 on Sunday. [SX as above].

By 1981 the to services followed the same routes (but with 200 added to their numbers) but the former 37 was much reduced. 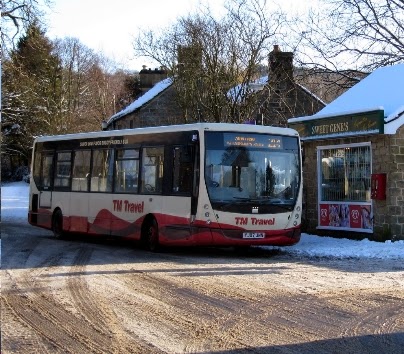 This pattern with minor variations, including an extension to Matlock, remained the norm for several years.

Then in February thus year a big change happened.

The 218 was rebranded as the Peak Line and provided with vehicles in a special livery. 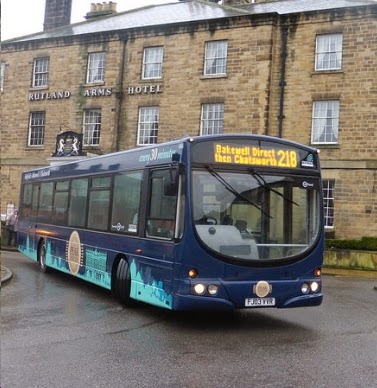 Note the blind display, "Bakewell Direct then Chatsworth". Buses run as in the picture above to Bakewell, then Chatsworth and back to Sheffield every hour. An second service each hour wiggles the other way; Sheffield to Chatsworth, then Bakewell and direct back to the city. 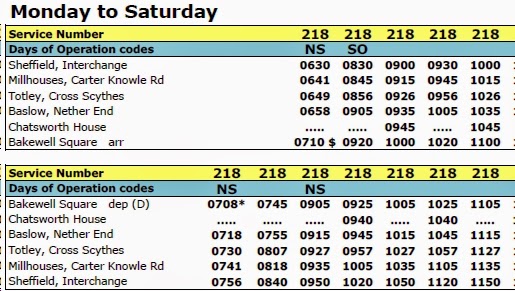 The Chatsworth "wiggle" runs even when Chatsworth House is closed. The service via Fox House has been reduced to a few occasional trips.

On Saturday 29th March, First started their summer weekend Derbyshire network. This unusual development began in 2014 and provides Saturday and Sunday services on what were once traditional Sheffield routes. This includes a "new" (i.e. very old) service 240 with journeys via Chatsworth as 241. 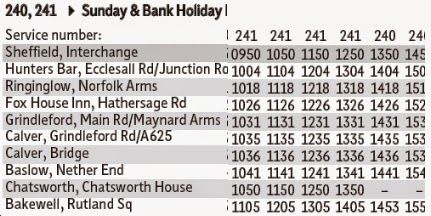 Unusually however, instead of running via the A625 from City to Fox House, the 240/241 operates via Ringinglow, served Monday to Saturday by very occasional route 4 journeys. 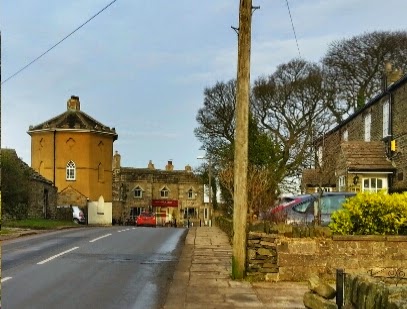 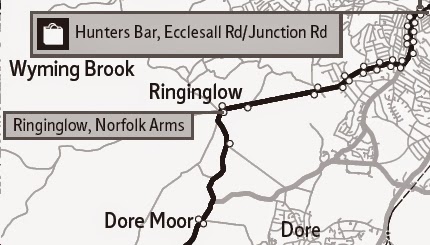 As far as fbb can remember the road between the top of Long Line (the long [straight] line on the map) and Dore Moor has never otherwise carried a bus route. 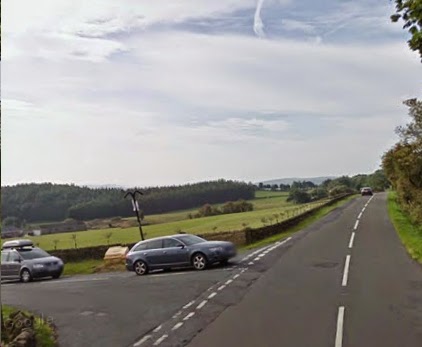 But don't try to find  timetables on First's web site. As late as Wednesday last week ...

... the new services were a closely guarded secret. There was no mention even yesterday, the first day of operation. 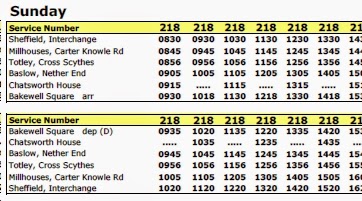 ... became half hourly, thus restoring the 1952 tradition of a "daily" service pattern from Sheffield to Bakewell. fbb did click on T M Travel's "bus times page" where, like First Bus above, the new times weren't! And still weren't yesterday; again the start day of the half hour Sunday frequency.

But Travel South Yorkshire comes to our on-line rescue; but not, of course, with any printed material.

Which begs the question. Will the operators tell anyone that these services exist?

Fact : never in the history of buses to Bakewell have services been so lavish. Three buses an hour on Sundays would appear to be ludicrous and unsustainable, yet First's summer only service was reported as being "busy" last year. Might there be competition on price, silly price, to fill seats and lose money? We will, as usual, have o wait and see.

-------------------------------------------------------
How to Be Popular - NOT!
One of the characteristics of many ages is that religion becomes stilted, over complex and lacking in purpose. Self interest becomes more important that worshipping God.
When they arrived in Jerusalem, Jesus went to the Temple and began to drive out all those who were buying and selling. He overturned the tables of the moneychangers and the stools of those who sold pigeons, and he would not let anyone carry anything through the Temple courtyards. He then taught the people: “It is written in the Scriptures that God said, ‘My Temple will be called a house of prayer for the people of all nations.’ But you have turned it into a hideout for thieves!”

The chief priests and the teachers of the Law heard of this, so they began looking for some way to kill Jesus. They were afraid of him, because the whole crowd was amazed at his teaching.

As well as a challenge to a moribund religion, this provocative act was detrimental o all those who made money from monopolistic trading in "religious" goodies.