Not everyone will have seen this! It was a lengthy comment on a recent blog about the Buses of Somerset/Buses of Taunton rebranding. 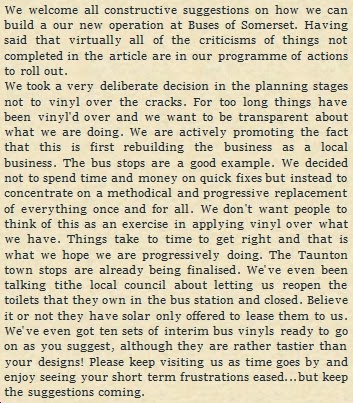 fbb had suggested vinyls but Anonymous said, "No Vinyls". But what is that patch of green on the left hand bus of these two? 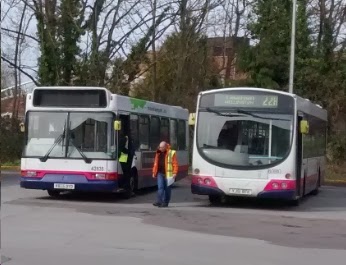 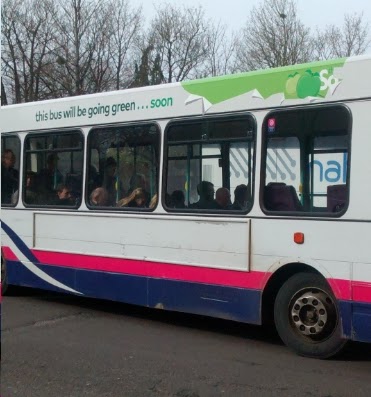 ... and cleverer than fbb's "basic" design. But application of the originally forbidden vinyl is by no means universal; which rather defeats the object. After all the bus could "go green" via a repaint scheme or by being replaced with a new(er) motor. So they should all be so adorned, surely? Anonymous says they have only got enough for five (or ten?) buses.

Another change at the bus station is the arrival of a regional network map; very posh but with the two spelling errors still in place. 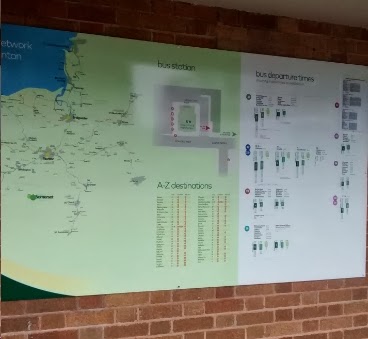 On the service 30 from Axminster, it's TytheRleigh and MillwEy Rise. But another bludner is inexcusable. Here is the plan of the bus station complete with "You are Here" red arrow. 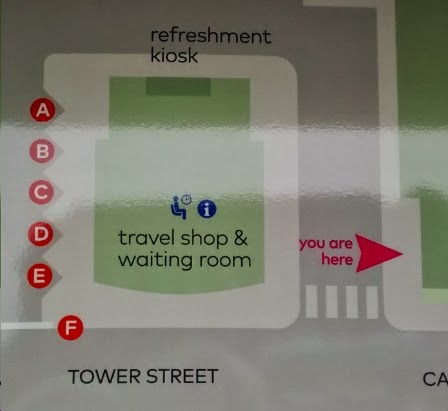 Except that fbb wasn't there; he was standing with his back to Stand A!

But the core problem remains; nowhere is there any display of timetables. Of course, you could enquire in the enquiry office; and you might have your own timetable booklet. But, there again, you might not be able refer to either.

You could, however, consult the revised timetable for route 29, the only one on display. 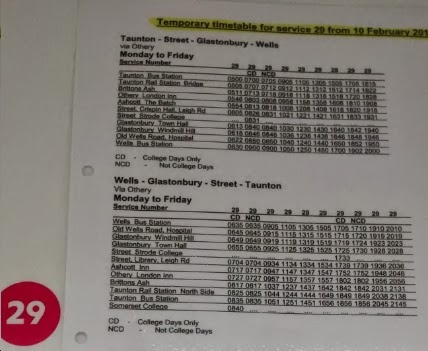 Sadly, fbb had forgotten his stilts and/or binoculars. Never mind, there was another source of such information. 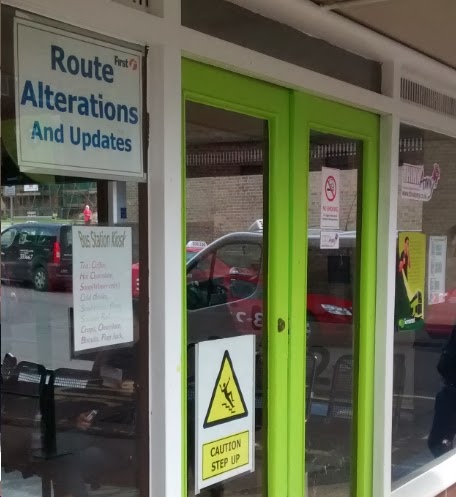 You could look below the "route alterations" poster. And read all about the station cafe! The revised 29 is posted to the far right, on the other side of the door.

To get to East Lyng, not served by the diverted 29, the county council has provided a FREE shuttle from Taunton. Of course there is no infomation about this (numbered 29S) at Taunton bus station. The bus leaves (sercretly?) from Castle Way. 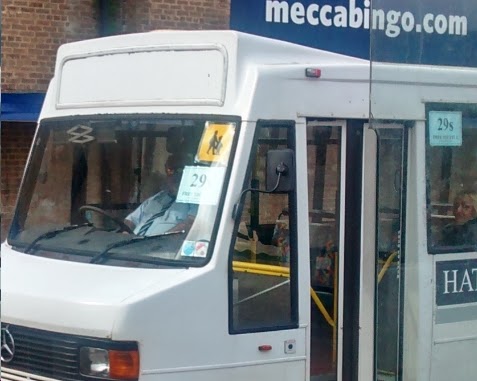 Why Castle Way? Well it may fill a gap in First's, whoops sorry, Buses of Somerset's service; but it's run by Hatch Green and you wouldn't want them in the bus station, would you? Here, the new "local" image looks rather like to old, unbending First. Oddly the 29S timetable does appear on the green apple web site.

But nowhere at the bus station. Poor customer service.

And big improvements and in hand for the building. Geoff is screwing a new plastic fascia on the canopy. 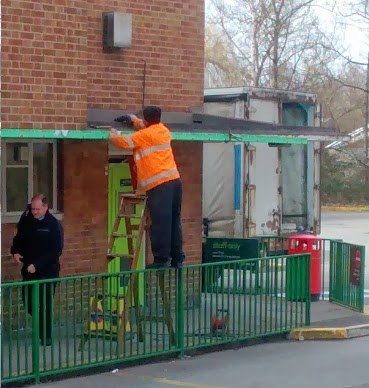 And, of course, Tauntonians are still obliged to ting the over-priced and under-effective Traveline for timetable infromation.

Taunton Council isn't much better. Here are some pics of its town centre map stand on Castle Way. 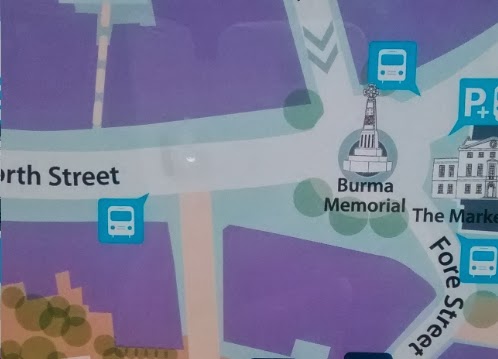 No mention of "The Parade" although all town bus services show that as their desination. There are still toilets shown at the bus station ... 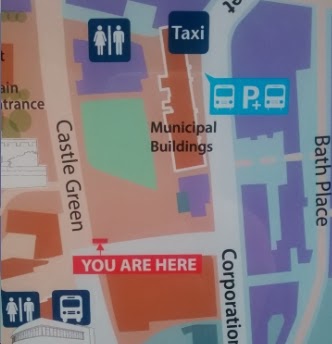 ... although they have long since closed. But most amazing of all, according to the Council, there are no bus stops on Castle Way, the un-named road between Castle Green and Corporation Street.

So these important and busy bus stops, just round the corner from the Municipal Buildings ... 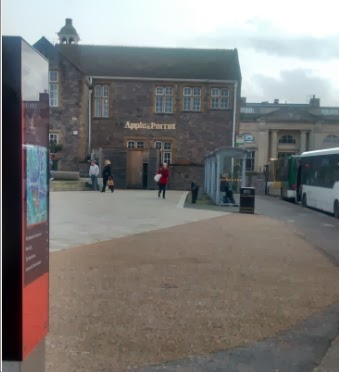 ... must be a figment of fbb's imagination.

Now come on, First Bus; your greenery will never be truly "local" whilst your customer service department is in Bristol and the dearth of timetables can only be solved by reference to a remote and costly call centre. And there does need to be some co-ordination between bus operator and town authorities to ensure that map information is (a) accurate and (b) consistent.

fbb's recent visit was with Mrs fbb via Park and Ride (75p each, return, ridiculously cheap), ostensibly to buy curtains. Sadly, none suitable were found; which was a bit of a draw-back! (Groan)

And talking of First and the floods; have a look at this. 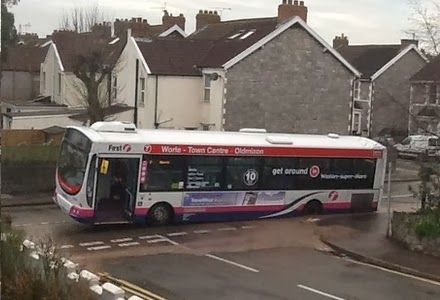 Apparently a burst water main had eroded the footings of the road (in Weston super Mud) but left a shell of asphalt in place. Until the wheel on the bus fell through. 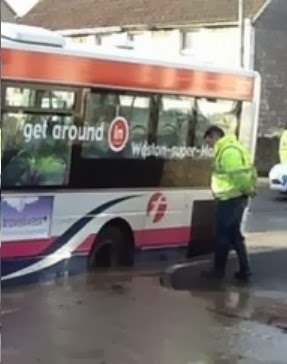 The driver was reported as being "in shock" - but no-one was hurt.

Next bus blog - Saturday 8th March
Posted by fatbusbloke at 02:00