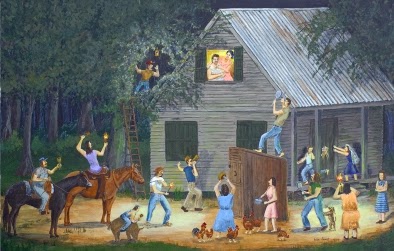 Originally a cacophonous mock serenade, typically performed by a group of people in derision of an unpopular person or in celebration of a marriage; now "a series of discordant noises." Thus an appropriate title for today's disconnected collection of oddments.

Missed a Bus to Bicester

Or - do rail companies read their own web sites?

After service on St Valentine's Day, the railway between Oxford and Bicester Town was closed. This is to facilitate substantial engineering work to re-open the line as a through route from London, part of Chiltern Railway's steady stream of improvement works.

But what is this, discovered yesterday, on Chiltern's web site? 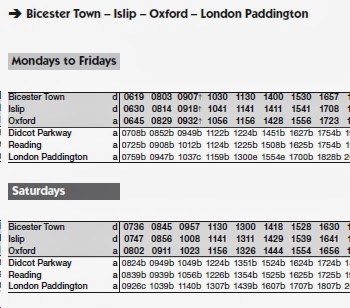 It looks very much like a rail timetable from Bicester to Oxford with connection from Oxford to London. It comes with a warning ...

... and an invitation to visit Chiltern's web site. What we are already at!

To be fair, if you scroll down a tad you do get the replacement bus service ...

... helpfully telling is that the "train ID" is "BUS". What Chiltern do not tell us is that here are two bus service numbers in use, namely CR1 ... 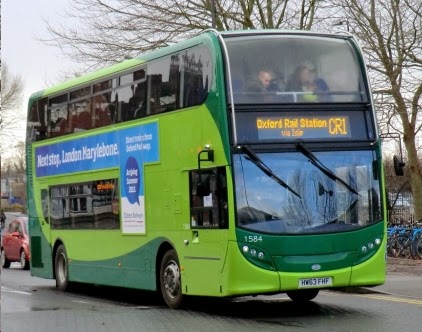 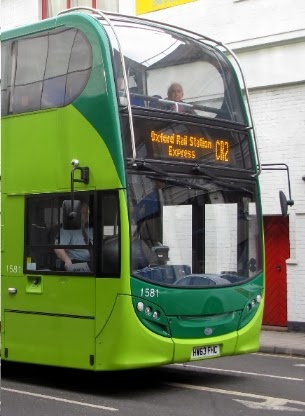 ... which proclaims itself to be "Express" and (one has to assume) NOT via Islip; as there is no other station on the route.

It might have been better to replace "trainID" with "bus route number" and change the heading from "BUS" to "CR1" or "CR2" as appropriate.

But, why, oh why (as they say) is the "old" timetable on line at all? It will NEVER re-appear for real. Or perhaps Chiltern's web site managers never travel by train and have no idea of the significance of Oxford to Bicester information.

And, yes: they are Southern Vectis buses loaned to fellow GoAhead company Oxford City Bus for the duration.

Or, we don't spend all day surfing the web!

Mrs fbb went from Axminster to Wimbledon on Saturday for a monthly prayer and bible study day. The day is long and tiring and the "old gal" doesn't like travelling if it is icy, very wet of there is a likelihood of interruptions to the usually straightforward train journey. Now things like this are rare these days! So, advance booking is out of the question. Therefore, on Saturday, she tackled the machine ... 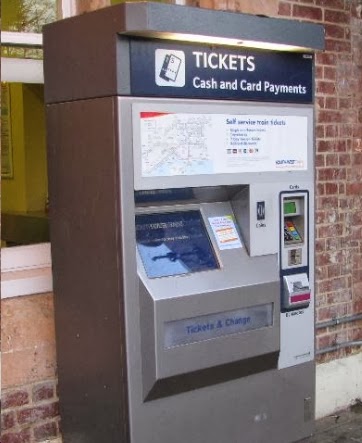 ... and successfully bought her off-peak day return ticket at approx £40. Whilst waiting, fbb watched a previous machine customer performing amazing feats of potentially panicky prestidigitation to pocket their pre-ordered tickets. fbb was amazed and confused to see the price come up as £10.

Now there was an offer which ended on 28th February ...

... except it had been extended! Now it is not at all clear how the fbbs could have discovered this. There was a poster in the booking hall ...

Mrs fbb queried this with the ticket collector on the train; but he couldn't do refunds. His advice was to ask at Wimbledon. Which she did ... 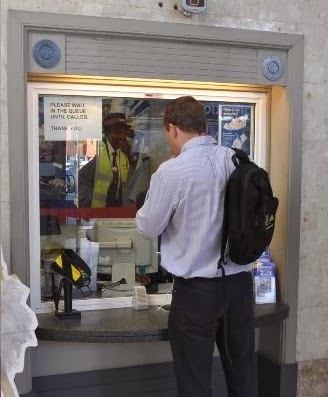 ... and got her £10 ticket and a refund of the wrong fare in full! Well done SouthWest Trains. Or nearly well done.

But surely, if you are relying on ticket machines, shouldn't someone make sure they can sell tickets?

And Talking of Facilities 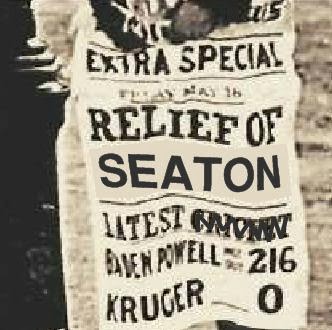 Things are getting very inconvenient here in Seaton. Working from west to east, the toilets at Seaton Chine are ... 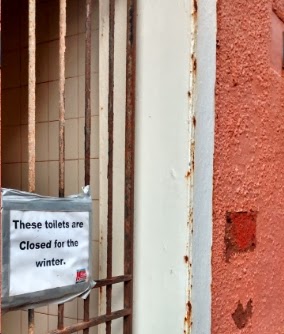 The toilets at Marine place are ... 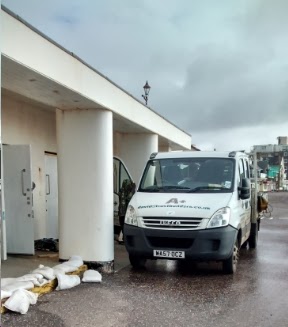 The toilets buried in The Burrow (an ancient mediaeval defensive mound) ... 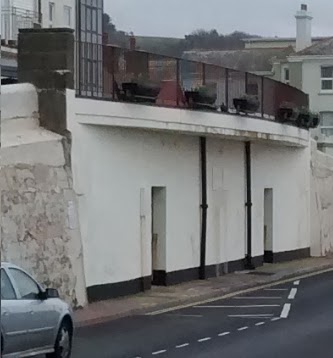 ... have been closed for years. These facilities were used (frequently) by fbb's granny and (occasionally) by little chubby bb some 60 years ago whilst holidaying. There is no blue plaque.

Finally, the toilets on the Underfleet are closed ... 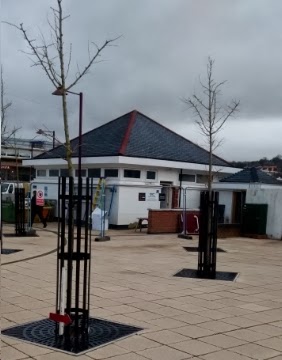 ... for refurbishment; although there was nothing wrong with them!

On Sunday 9th March, several thousand people will be descending on the town for "The Grizzly" (whatever that might be!**).

Could be painful in all sorts of ways.

fbb has been a loyal Whovian for 50 years, although his enthusiasm faded somewhat with the very silly Sylvester McCoy episodes. 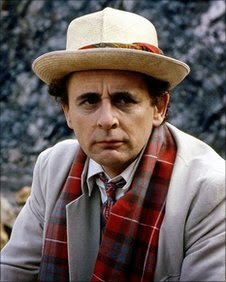 A 69th birthday card from friends and blog readers Alan and Jackie on the Isle of Wight successfully merged two of fbb's many interests. 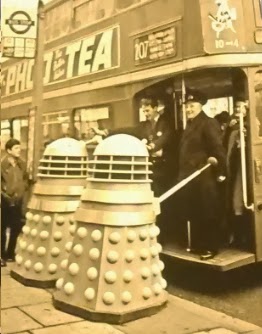 Gor Blimey, Loveaduck!
You might be a Dalek, mate;
but this'un's full.
There's another behind!

(stereotypically non PC caption added by fbb). We now know why Alan is our senior Isle of Wight correspondent; he spent a whole 55p on the card! From a charity shop!

On Saturday IT was open for "viewing" by the doubtful Northamptonians. The day was celebrated by a parade of buses ... 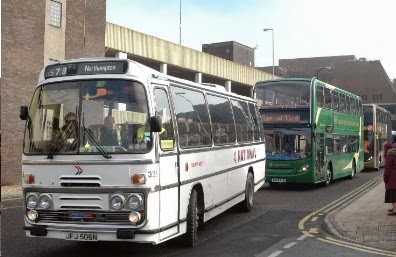 ... ironically including a preserved National Express coach to represent services which will never use North Gate. National Express are relegated to a back street behind the old bus station. But the protests continue:- 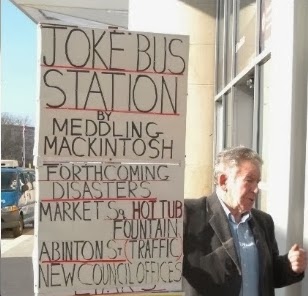 This story, as they say, will run and run; probably more smoothly than the buses as they queue to get in and out of the stands! 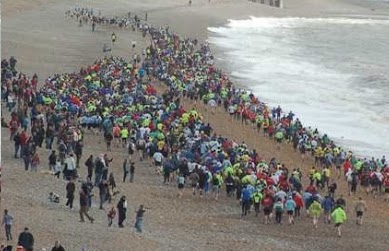 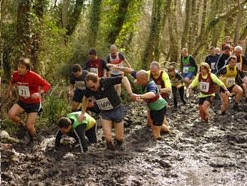 ... a 20 mile beach, mud and cliff cross country. Or, as it may well be this year, cross legged! For those anxious to know, fbb was too late to enter - this time.

"Grizzly" means "grey-haired" and has absolutely nothing to do with running, be it difficult or easy.