Back in the good old days of Sheffield's articulated buses and the City Clipper ... 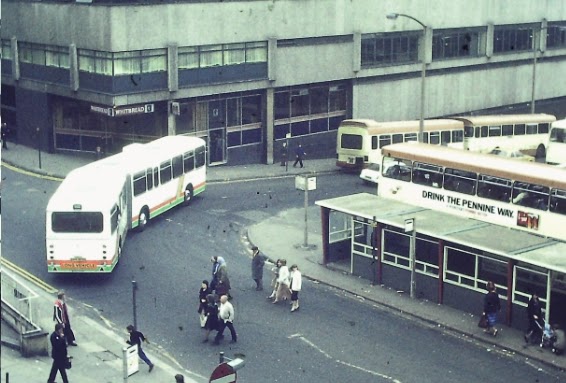 ... printing was still carried out by using little cubes of metal type; a diagram had to be drawn by hand, photographically converted into a larger metal block and incorporated mechanically into the page. Despite thee imitations, crude by comparison with our modern digital and confuser driven stuff, South Yorkshire PTE managed to include a Clipper map in their timetable book; this from 1981. 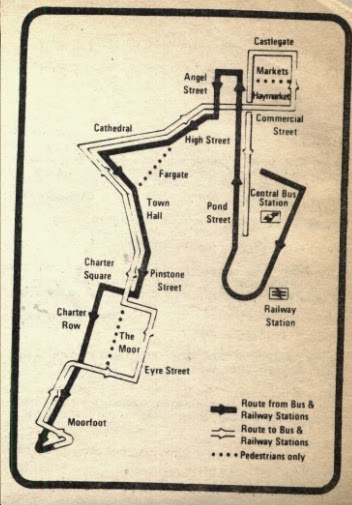 It was close to being geographically accurate as well.

Maps of the Freebee were a feature of its early publicity. Despite it's being easier to do the job using moder technology, ... ... this effort was unnecessarily cluttered and had the Winter Gardens and Fargate in the wrong place. A later (?) alternative was simpler, easier to read; but still perpetrated the same ludicrous errors. 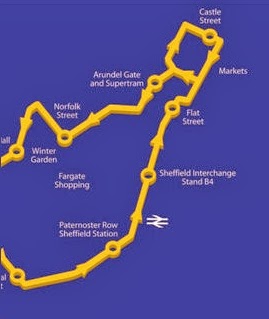 The stop on Norfolk Street should be where the arrow is, to the right of that label. But from 2011 the tender passed to First Bus and the "Arundel Gate and Supertram" stop was removed. So a 2011 FreeBee leaflet replaced the map with ... 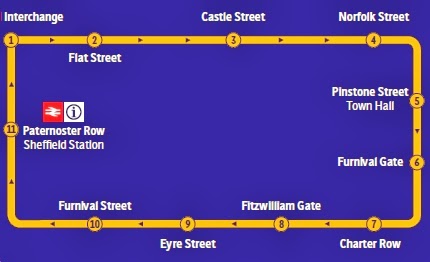 ... an even more ludicrous non-geographical diagram. If you really, really must show he route as  rectangle, at least get it the right way round. A rectangular representation should have the interchange bottom right and Fitzwilliam Gate (Moorfoot) top left (sort of). In actuality, the bus trundles round its route in an anti-clockwise loop, whereas the above, so-called, diagram has the vehicles running clockwise.

Never mind, a replacement leaflet is now current which continues with the above nonsense ... 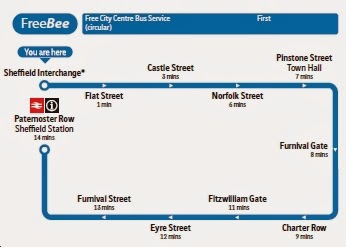 ... but shows buses as terminating at Sheffield Station! It's a fair walk from Paternoster Row to the Interchange; and doubly frustrating as the bus (presumably) runs past you, empty. In a publicity treble whammy, note the "You are here" label; really, really, REALLY helpful if you think you're waiting  at, say, Pinstone Street - "You are NOT there."

Of course, there might be a simple explanation for the apparent curtailment of his circular service at Sheffield Station. Here is the "route description" from the front of the current leaflet. 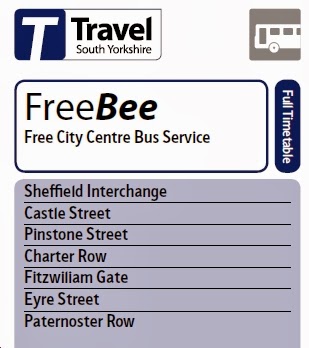 It doesn't complete the circle either. Perhaps the leaflet compiler has never ridden on the FreeBee?

But there will be a full route description inside the leaflet, won't there? There was a good destination guide in the earlier example. 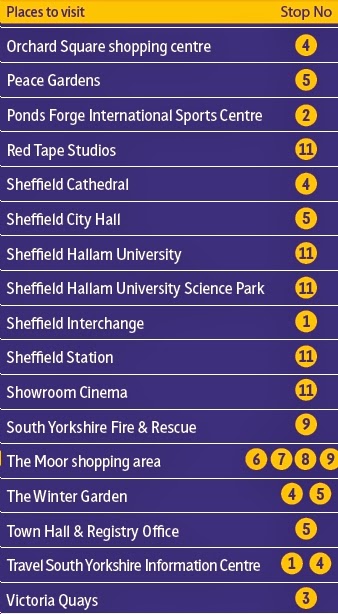 The replacement in the current (and final) leaflet is ... 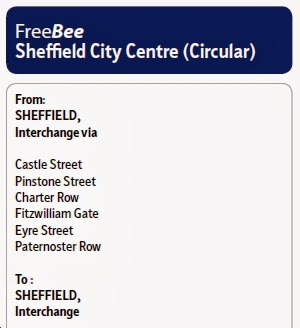 In case our readers have forgotten, this is a "proper" map, showing all stops:- 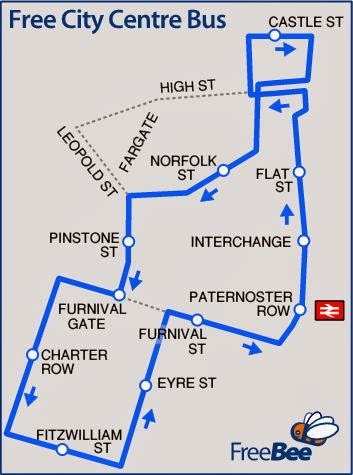 In one respect, however, fbb has to admit (grudgingly) that the new leaflet is better than the old. It may have an unhelpful map; it may have incomplete route details but it does have a timetable. Hoo jolly ray! The old version just says this:-

And, of course, we are enormously grateful to the PTE/Travel South Yorkshire for confirming that every stop on the Sheffield Freebee is located in ... 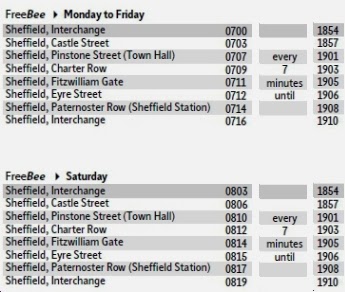 ... Sheffield. fbb had high hopes of a free ride to Canterbury!

At least in 1981 someone knew where the bus went! 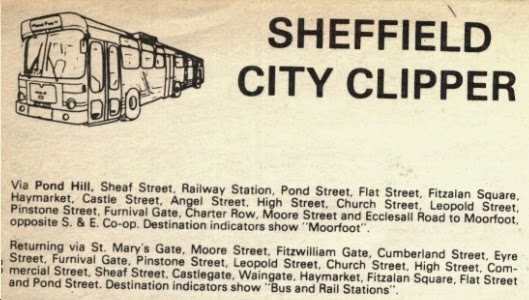 But from 1910 on Saturday 26th April, the sound of bussing buzzes will be no more. Is this a sensible decision? Of course not. It will harm trade in Sheffield centre and save absolutely nothing from the community's combined coffers. This is a politically motivated decision designed to help the PTE maintain a lavish (and unnecessary) city centre office block and associated life-style; there's plenty of room elsewhere in the County for a down-market alternative.

Let us remind ourselves of the Authority's own evaluation of FreeBee:-


Travel South Yorkshire was delighted to be at the heart of the first ever FreeBee bus. Launched in Sheffield city centre in October 2007, it continues to be a rip roaring success and a real customer favourite. Travel South Yorkshire runs the free service every seven minutes from 0700 to 1900 weekdays and 0800 to 1900 on Saturdays and is a hugely popular and trusted choice for travellers in Sheffield.

Which is why they are withdrawing it.