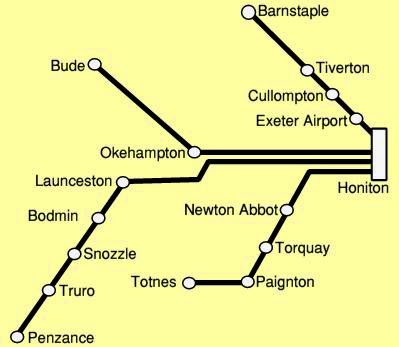 Correction : all Megabuses scheduled to call at Exeter Airport

fbb has been investigating a clutch of new MegabusPlus services centered on Honiton and, possibly, designed as a temporary contribution to train travellers beset by the on-going woes of high seas, flooding and the consequent repairs. "Investigating" is the wrong word; "trying to investigate" is better.

Faced with an unfathomable web site and a useless Customer Service department, your chubby author has made his way to Honiton Station to watch the happenings. Only there haven't been any. Possible departures at 1015 and 1020 have failed to materialise and at 1045, fbb has returned to the lovely little station cafe to indulge in a late second breakfast / early lunch. 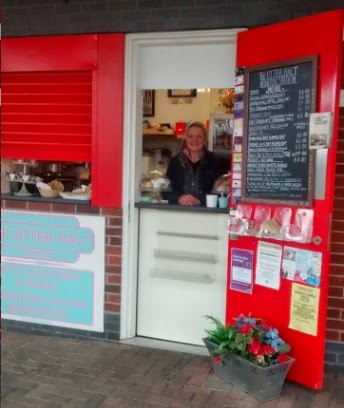 The proprietrix did confirm, however, that Megabuses did exist, sometimes three at a time and always carrying no passengers. Look out, she ventured, for the little people carrier. 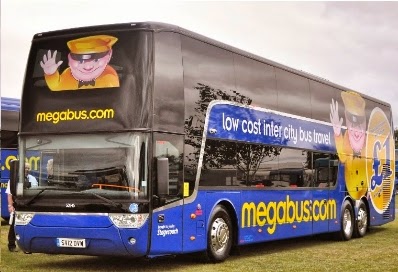 People Carrier, thinks fbb; that doesn't sound like an air conditioned double deck coach as promised in the Megabus press release. Maybe, thinks fbb, the caff lady has got it wrong. Anyway, the next possible Mega movements (according to a local enthusiast) were as follows:-

Plenty to observe? But there were 45 minutes to enjoy breakfast/brunch/lunch and read the morning paper, so fbb returned to his seat at the bus stop, noting the lavish publicity for Megabus. 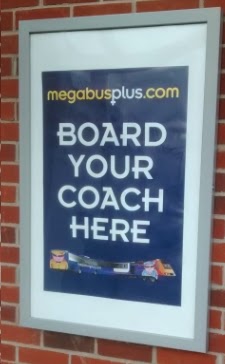 Yep, that's it. No times, no printed material in the racks in the waiting room; nothing else, except one small publicity sticker.

Bus travel all around the UK; but not, alas, from Honiton - so far. But wait! What is this that has crept in while fbb was buying his butterless butty? 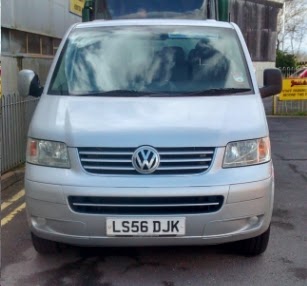 Was this really a Megabus double deck coach shrunken in too hot a wash? There was a label in the windscreen ...

... lavish in its route information. The helpful lady driver informed fbb that she had come from Bodmin with one passenger. "It should have been three, but I had two no-shows", she said without emotion. As fbb finished his substantial snack, the parked Hamilton Gray coach roared into life ... 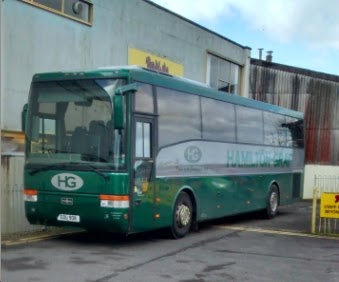 "Where are you going now?" asked el chubbo, to both. "I'm going home," replied People Carrier personage, "So am I," added big coach driver, "I'm not needed." And they both prepared to set off, empty and unloved. Their departure was impeded, however by the arrival of the 1128 service 52B to Sidmouth and Exeter, followed, hot on its rear end by another coach. 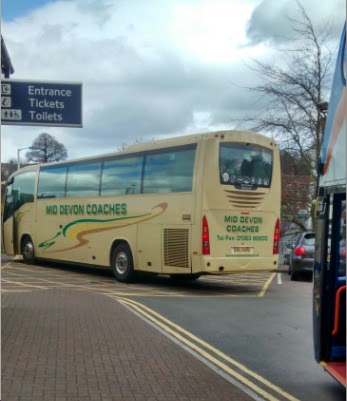 The third driver told me that he had come from "Torquay and lots of other places" and had carried zero passengers. He also explained that he was going back to Exeter.

The 52B departed at its alloted time leaving Hamilton Grey, Mid Devon Coaches and the anonymous minibus to skulk away still empty and still unloved at around 1140. Three vehicles, three drivers and just one incoming passenger. Not a particularly encouraging business plan, is it?

There is a spooky end to his sad and sorry tale. The day after this disappointing expedition, fbb and Mrs were scheduled to go via train and coach to Newton Abbot, there to meet up with a (very) senior bus company boss for tea and buns. At 1630 they boarded their return coach to Exeter and, lo and behold, it was the Mid Devon Coaches vehicle and its driver who had appeared (and disappeared), passenger-less, at Honiton. 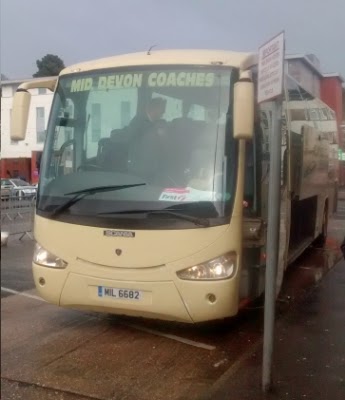 It's a small (coaching) world. This time, running for First Great Western, he carried 25 passengers.

What do we conclude from fbb's brief period of observation?

1. The Megabus web site is appalling

3. Megabus publicity for the Honiton Hub is appalling 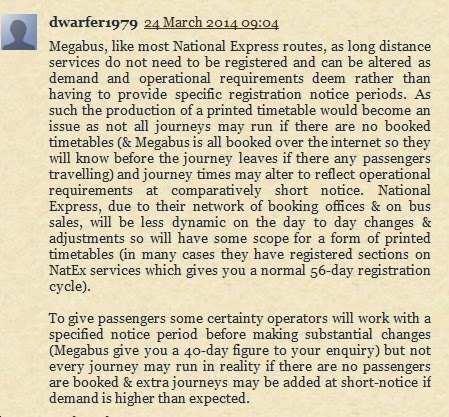 P.S. Is item 5 in fbb's conclusions list legal? A service from Honiton to Cullompton and Tiverton would need to be registered as a local bus and failure to operate it, empty or otherwise, would fall foul of the law. Is that why no journeys can be found for this leg? Is that why no bookable journeys exist to or from Honiton; every passenger is expected to arrive/depart by train.

Whilst several blog readers have jumped to the defence of Megabus, fbb feels that the whole Honiton project is a disaaaster darling. Whether that is intentional or simple incompetence is open to further debate!

It is in item 4 that we may have our explanation. First Bus has organised up to 200 coaches to cover flood disruption. National Express has doubled its capacity to the far west, so the company claims.

National Express is today (Tuesday, 11 February) pledging to meet any extra demand for its services in the South West as the rail disruption looks likely to remain for weeks to come. New express services will reach London in as little as four hours - quicker than the rail replacement alternatives.

The national coach operator is pledging to keep adding capacity and its standard fares in place for as long as necessary, ensuring everyone who wants to travel can still do so.

Presumably, Stagecoach has been under some political (or even Political, large "P") pressure to help with flood relief. "I know," says Mr Robert (formerly Bob) Montgomery, Stagecoach boss ... 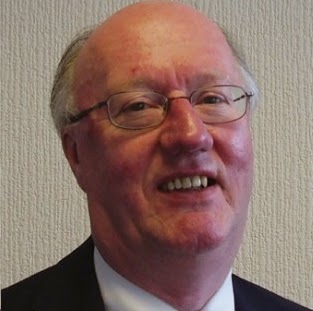 ... "we'll run some Megabuses ftom Honiton." "But," he thinks, under his breath (can you think under your breath?), "we won't try very hard, then we can withdraw them once things get back to normal."

Next bus blog : Thursday 27th March
Posted by fatbusbloke at 02:00