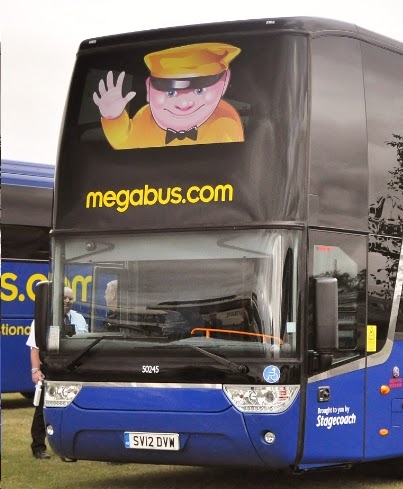 Local news broke here in East Devon a few weeks ago. Megabus would be operating a series of routes based on Honiton Station. These would help passengers travelling to storm-ravaged Devon and Cornwall. The press release sounded impressive. 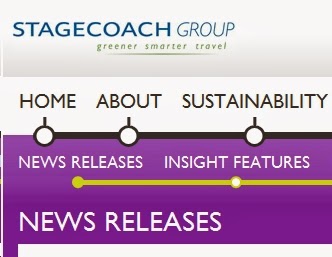 The integrated service will provide a seamless link between London and the West Country using a combination of South West Trains rail services and megabus.com coaches.

It will provide significant extra public transport capacity to keep communities in Devon and Cornwall connected while one of the main railway lines is closed following the collapse of the sea wall and damage to the track at Dawlish.

The new services will use a rail hub at Honiton providing onward coach connections to a number of destinations in the south-west.

From Honiton there will be four routes: Cullompton-Tiverton-Barnstaple; Newton Abbot- Torquay-Paignton-Totnes-Plymouth; Launceston-Bodmin-St.Austell-Truro-Penzance: and Okehampton - Bude.

The coach-rail services will operate Mondays to Fridays. On Saturdays and Sundays, there will be one departure in each direction on the Plymouth and Barnstaple routes only.
,,
A fleet of five double-decker coaches will be used for the operation, offering 4,000 seats a week. Prices will start from £1 (plus 50p booking fee) and most passengers will pay less than £28, with the network offering journeys of up to around 300 miles.

The services would, in fact, be branded as MegabusPlus, the plus being the concept of coach "plus" train. Now fbb did not take much notice of this news item as the local rag that carried the story implied that these routes were temporary, for the duration of the inundation complications.

That may well be the case, but there is no "T" word in the press release or on the Megabus web site, but there may be a hint.

megabusplus.com now operates services in the South West of England. This exciting new transport link to a number of destinations in the south west will help keep communities in Devon and Cornwall connected. Still from £1 + 50p booking! Book your seat now and keep Britain moving!

So fbb, belatedly, set out to investigate. Firstly, find out when these services operate, then go to Honiton and watch it all happen. Therein lies the first snag. In a recent article in the trade press, Professor Wenzit Goh, former Latvian transport minister and now secretary of NUTS (The National Union for Timetable Secrecy), has always enthused about Megabus and its derivatives. Timetables are well hidden in favour of on-line booking of specific journeys; so much easier opines Wenzit. 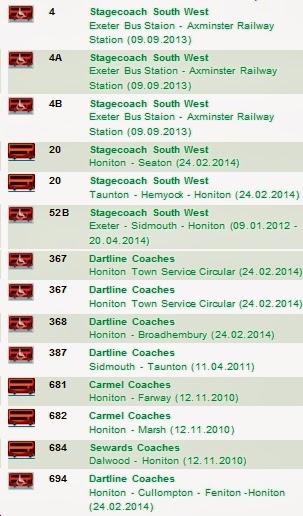 ... so much so that fbb emailed Megabustomer Services and asked for details of routes and times from Honiton.

fbb replied the he did not know where he wanted to go; but that he wanted a timetable so he could see what opportunities there were from Honiton. Back came this helpful reply:- 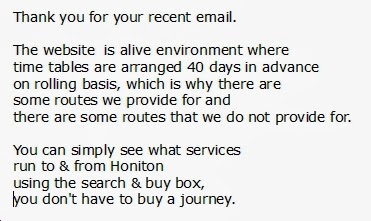 fbb has no idea what that is supposed to mean; blog readers are invited to offer suggestions via the "comment" system. What it does mean in practice is that Megabus (plus Plus) timetables are simply a secret. There are NO timetables.

A local bus enthusiast had assembled some sort of departure list for services from Honiton; but he stressed that things may have changed. 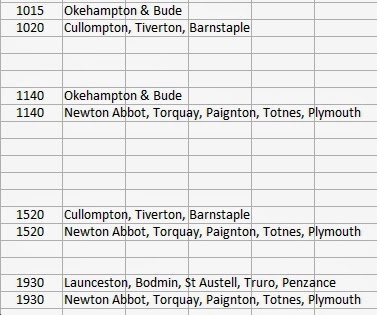 There's nothing for it but to go on-line and do as the Megabus message mentioned. 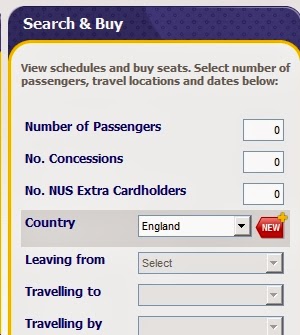 But you can't choose a departure until you have entered "number of passengers". Try "1"? 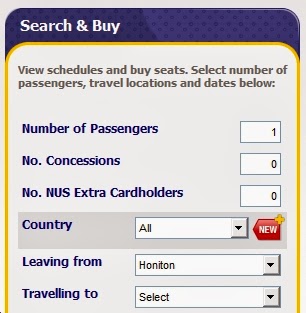 Look! At last, all fbb has to do is to choose a destination; and there are plenty to choose from (Truro is just off the bottom of the list.) Technically, fbb's "screen shot" doofer makes the screen below vanish; so it's mobile phone camera for this one. 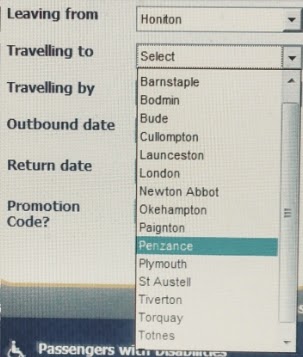 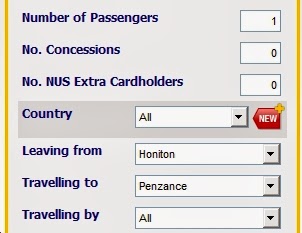 We will see how things developed in tomorrow's mind-numbing and exciting episode.

Whilst waiting, a point for our readers to ponder. Is there any truth in the rumour that Dara O'Briain was the model for the inanely grinning Megabus man? 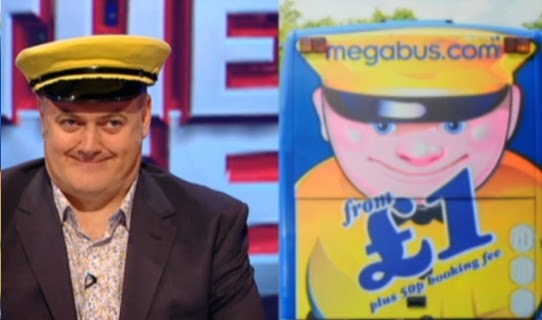 The "plus train" driver has a more subdued and mature expression!

Perhaps, like fbb,  he is not at all sure how many Megabuses will be plussed to his train at Honiton. The train must be packed, however, as he has swapped his usual 3 coach 159 for an eight-car HST. 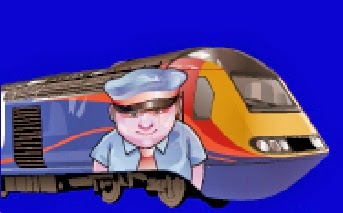 Next (Mega)bus blog : Tuesday 25th March
Posted by fatbusbloke at 02:00