fatbusbloke's
Awesome
Aberystwyth
Adventure
Part 4
The original primary purpose of the line was to carry timber and ore from the Rheidol valley to the sea and the main line railway at Aberystwyth. Many lead mines in the valley were producing ore at the end of the 19th century. Construction was begun in 1901 following an Act of Parliament in 1897. Rock was hand-hewn instead of being blasted, in order to save money. By the time the railway was ready to open in 1902, lead mining in Ceredigion was in steep decline. However a significant growth in tourism was under way, and the carriage of passengers soon became the principal traffic of the railway. It opened for mineral traffic in August 1902 and for passengers on 22 December 1902.

Having arrived in Aberystwyth in a minor monsoon at 0916, fbb decided that exploring the town in a mac-less manner was meteorological madness and, after a brief sortie to the neighbouring bus station, repaired to the caff opposite for a second breakfast. 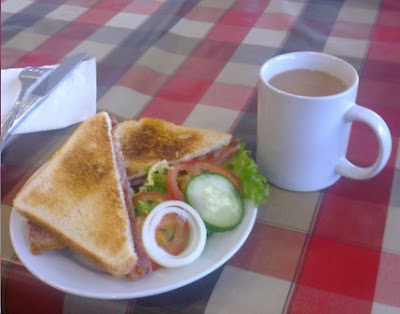 It was soon time to return to the station to catch the 1030 to Devils Bridge. When the line was part of The Cambrian or GWR or BR everything was integrated. Latterly the track was moved across to use a redundant platform in the main station. 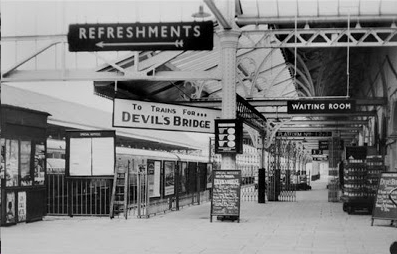 So fbb was a little nonplussed to find nothing by way of advert, direction or encouragement except this sign ... 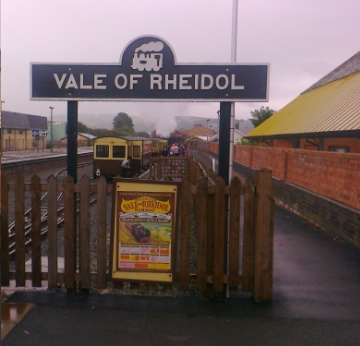 ... and a train. In fact you have to walk twice the length of the train and more to a cubicle (an old freight container?) to buy your ticket, then all the way back to board the train. There wasn't even a sign saying simply "tickets this way". 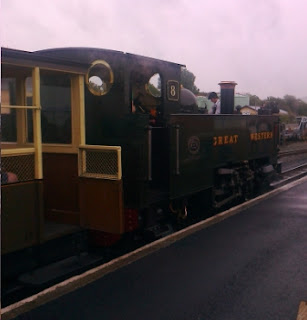 ... and, dead on time, we set off. fbb has never ridden on this line before and the initial impression was, frankly, disappointing. Chugging through the town's industrial estates was not fbb's idea of a narrow gauge tourist line. 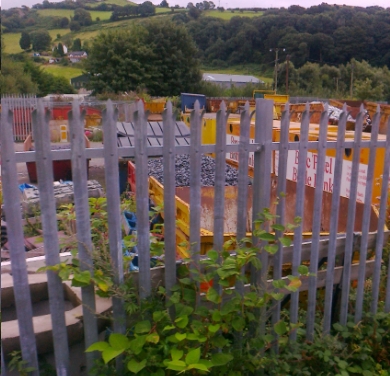 But the old fellow has learned a new Welsh phrase:- Banc Potel.

Being British, stupid and on holiday, fbb and some twenty others enjoyed an open-sided coach. There was about a six inch strip down the centre of the bench seats which was not dampened by the ingress of rain, mist and general wetness.

Initial disappointment soon gave way to delight, however, as the little engine started working very hard to haul its load up the mountains and on to track precariously perched on precipitous platforms pick-axed out of the peaks. 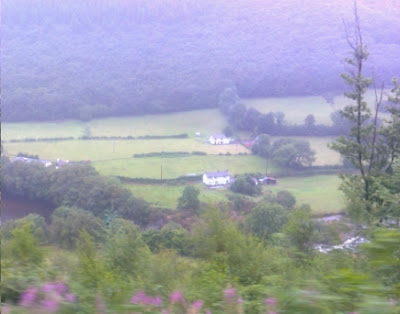 All too soon (not soon enough in view of the rain?) the train chugged into the Devil's Bridge terminus. 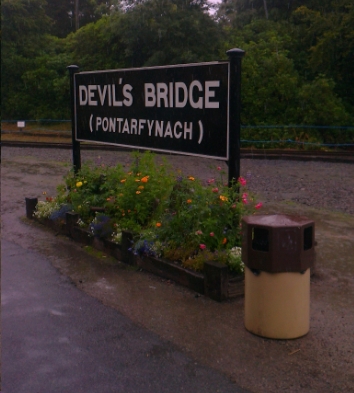 The bridge spans the Mynach, a tributary of the Rheidol (the Welsh name for the station is Pont = Bridge, ar = on the, Fynach = Mynach and note the utterly baffling Welsh consonant change from "M" to "F"!). The bridge is unusual in that three separate bridges are coexistent, each one built upon the previous bridge. The most recently built is an iron bridge (1901), which was built over a stone bridge (1753), which was built when the original bridge was thought to be unstable. The builders of the 1753 bridge used the original bridge (built 1075–1200) to support scaffolding during construction. 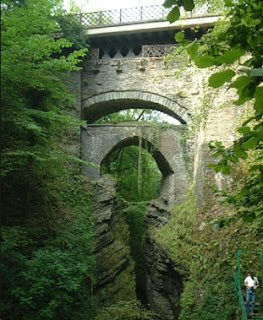 The bridge is at a point where the River Mynach drops 300 ft in 5 steps down a steep and narrow ravine before it meets the River Rheidol. The set of stone steps leading down to the lowest bridge at the waterfall are known as Jacob's Ladder (glimpsed bottom right).

The train sits for an hour at the terminus allowing the following options:-
1. Visit the toilets (exacerbated by the rain)
2. Watch the engine change ends in the rain
3. Pay a fiver to drive a real steam engine a few feet along a siding (in the rain)
4. Enjoy a death defying walk down Jacob's Ladder in a downpour
5. Sit in the waiting room for an hour watching the rain.
6. Visit the caff out of the rain
7. Get back on the train and watch the rain. 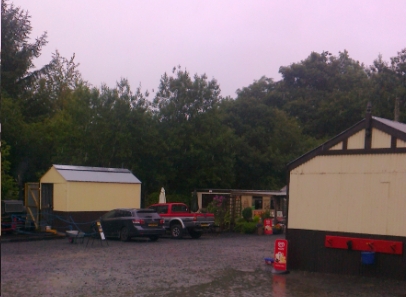 fbb spent his hour enjoying 1 (twice!), 2, 6 and 7. 5 was unavailable as a party of tinies bagged the four benches and sat consuming their packed lunch.

Once again, fbb was disappointed with the facilities and the ambiance. The caff was pleasant, the staff were friendly and the cheese and salad sandwich was excellent, as was the mug of tea; BUT refreshments in an old freight container? Or was it a second hand static caravan? 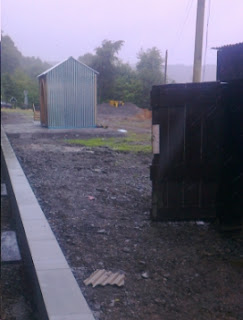 So the hour of shivering passes somewhat slowly and fbb chickens out on the open sided coach for the return run. And guess what?

Out comes a watery sun for most of the trip back down the valley! 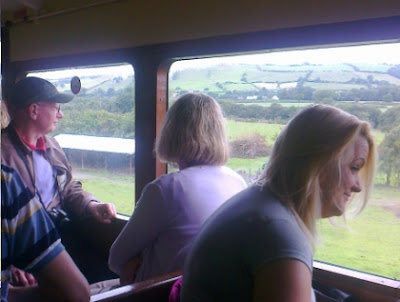 Sadly the coaches are locked so fbb couldn't nip out at the next station and regain his open-sided perch. Indeed, as usual, the train made no intermediate stops!

Never mind, no need to be disappointed, it's pouring down by the time the train arrives back at Aberystwyth! The Vale of Rheidol arrival is at 1330 and the train back towards Abergynolwyn leaves at (oh yes it does) 1330 thus allowing fbb a whole two hours to enjoy the town until the next one at 1530 ... 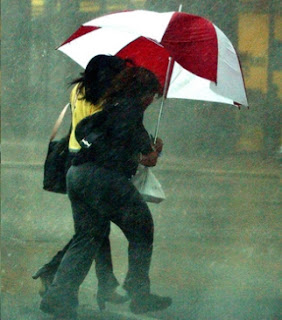 OK, the pic above is NOT of Aberystwyth - but you get the idea!

Despite weather disappointments (but it is Wales, so what do you expect?) and poor station facilities, the ride was a much, much better experience than this blog might at first suggest. If you can manage to organise a fine day, the geography of the line outstrips most of the "Little Trains if Wales" except, perhaps, the Ffestiniog.

If you've never been, GO! And take a mac!

And to fill his soggy time back at Aberystwyth, fbb went on a bus ride. But that's tomorrow's story.

Next Bus Blog : Friday 23rd August
Posted by fatbusbloke at 02:00