A very good train service operates between Strasbourg, Rosheim and Barr in the Alsace region of France. Running every 30 minutes ... 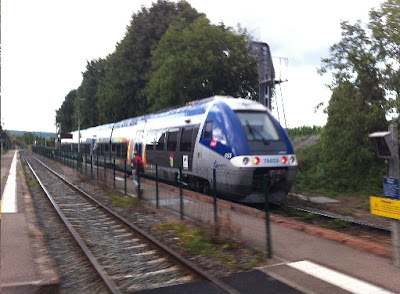 ... smart TER trains link this little historic town of just less than 5000 inhabitants with Strasbourg. But, on Mondays to Fridays, the near clock-face frequency is interrupted in the afternoon ... 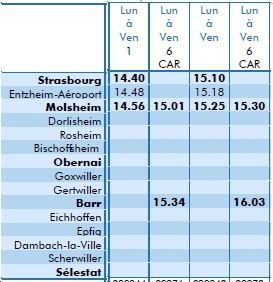 .... by "car" (French "autocar" = "coach") and note 6 refers us to the separate coach timetable. Likewise the last train of the day is also a coach. 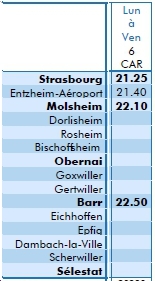 To complete the picture, there is a similar gap in the service in the other direction and the first train from Sélestat to Molsheim on Saturdays is also a coach.

Reference to the "car" timetables reveals a full stopping pattern but with some different locations, hence the confusing gaps in the rail tables. 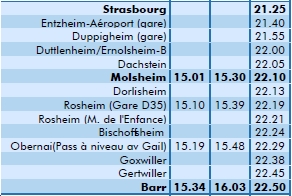 Lorry driving chum David even spotted the 2219 southbound from Rosheim as he watched bed-time TV in the comfortable cab of his huge blue Mercedes truck. Sadly it was too dark to take a photograph as many of the town's streetlights are switched off at about 2000! It might have looked like this one? 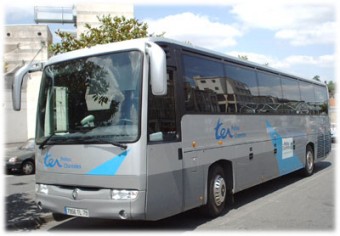 There are a number of possible reasons for this bustitution, which appears undated and thus a permanent feature of the timetable. The afternoon gap may well be to provide a slot for routine track maintenance; a gap which used to be called the "white period" in French railway parlance. The late and early trips will jut be a money saving exercise!

David reports that the vehicle he saw was actually carrying passengers, but "not many". And it did have a proper bus stop at the "Maison d'Enfance" time point. 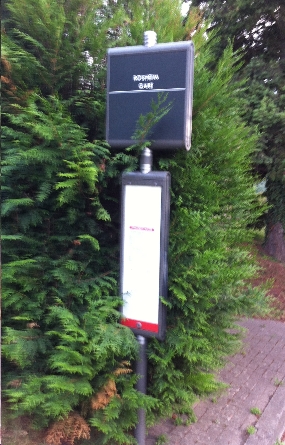 Before spotting this bus that was a train, David had toddled into the town to look out for other tops and timetables.

And found none! The local buses are run by ...

... and they've got a juicy phone number and a stylish web site with a local journey planner. 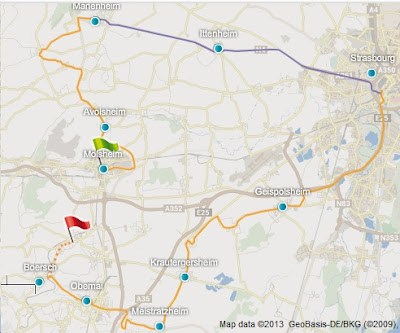 The journey planner advised a bus from Molsheim to Manenheim (orange); then from Manenheim to Strasbourg (blue) then from Strasbourg to Boersch (orange) followed by a 3 kilometre walk to Rosheim.

Hmm? And we think Traveline is grim!

The formality and exaggerated politeness of French correspondance, even electronic, is delghtful! "We have just gained cognisance of your email (courriel)."

TER coaches; we know there's not many of them?

There are, apparently, some "on demand" services to Rosheim from surrounding villages, BUT ...

Eventually found it; but it's".eu" not ".com"! And there's nothing there either.

"Remaining attentive for any other similar enquiries, please accept, Sir, our best wishes." Sadly a subservient tugging of the forelock is not visible by email!

The reply was back in three hours. Would that UK customer service were anything near as good!

But it is confirmed, there are no "nomal" bus services in and to Rosheim and it's over mile to walk from the station. 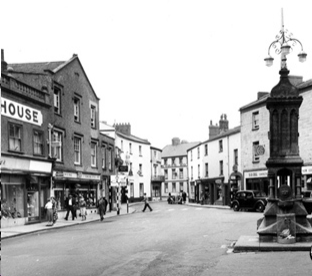