fbb had plenty of time in Lyme Regis to muse over alternative means of travel. Back in the early sixties he could have ridden all the way to and from Seaton by train; but the journey would have been long and expensive with changes Axminster and Seaton Junction.

Both the Seaton and Lyme Regis branches were closed as a result of Richard Beeching's business survey and many have often complained about the folly of his axe wielding activities. As stand-alone businesses it is unlikely that either line was ever profitable but, like so many services available on the railways, they did contribute to the overall growth of rail travel and holiday mobility for the masses. 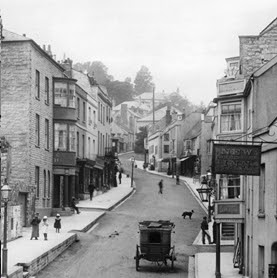 For Lyme, that mobility was some time coming. Once the London and South Western Railway had opened its main line in 1860, four (horse drawn) coaches a day plied their unhurried trade to provide connections at Axminster.

The branch eventually opened in 1903 and the coach retreated to provide links between the new Lyme Regis station and the town centre. It was a long walk, especially back to the station, uphill and with bulky luggage (station top left). 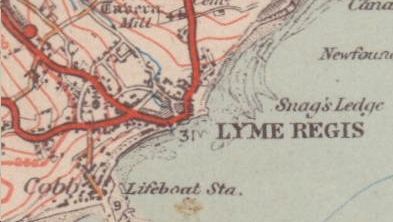 A published summary of train times in 1923 is revealing. 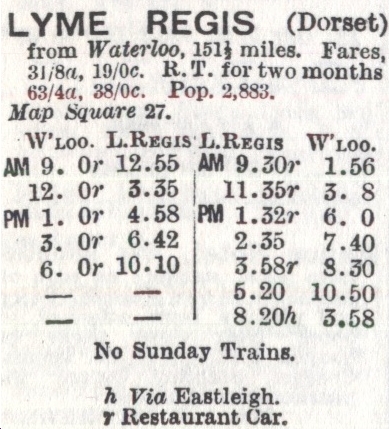 Journey time was roughly four hours with some notable exceptions, both ways. The 12 noon from Waterloo offered a speedy 3 hours and 35 minute journey; but at the other end of the scale a 2020 departure from Lyme would get you to Waterloo for 0358, a modest 7 hours and 28 minutes later. Enigmatically the journey is annotated "via Eastleigh"; the mind boggles.

How does this compare with the service in 2013. Today's railway offers an hourly service from Axminster seven days a week taking about 2 hours and 50 minutes; the bus (with connection time included) adds another 30 minutes. There are probably a dozen workable scheduled journeys each day. Southwest trains even includes the link on its network map. 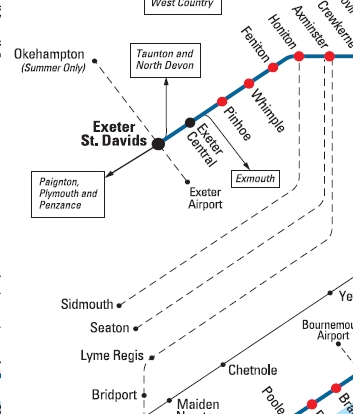 The bus service is often unreliable. 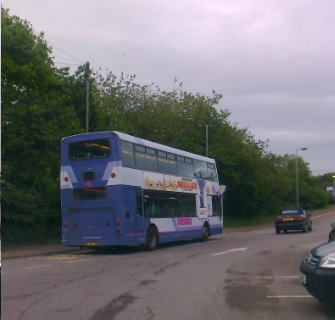 A commentator on the previous blog wrote in 2011, "It has to be said that there are frequent occasions when the traveller from Lyme Regis requires the power of prayer that the 31 arrives reasonably close to its allotted time as despite the timetable, buses are often observed arriving as the trains depart or have departed."

And, of course, you cannot buy through tickets for the train from Lyme, either on the bus or anywhere in the town. Indeed, the through booking facility is absent from any on-line journey planner or fares site, even that from Southwest Trains, the company which sort of, hesitantly, even clandestinely, offers the facility. 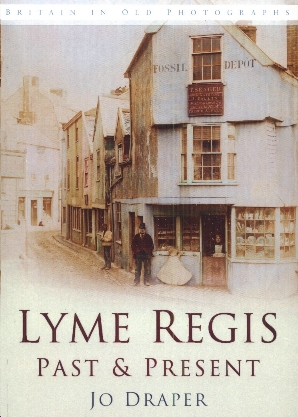 ... Jo Draper has revealed her (his?) enthusiasm and expertise for the photogenic little town just over the border in picturesque Dorset. Priced at a reasonable £12.99 in local shops (cheaper deals are available on-line) the pages conduct us from the times of Mary Anning, Captain Wentworth and the French Lieutenant's Woman through to the present day.

And there are even some pictures of buses and the branch line! If you are remotely interested in the town, buy it and you will become more captivated than you ever thought possible.

Even if the bus services are throughly unreliable on busy summer holiday days!

----------------------------------------------
Some suggest that it is totally untrue that the ancient Welsh warrior dressed in nothing but woad. The reference may be a mis-translation of a latin word meaning "glass". Nevertheless, the idea of Owain Glyndwr's predecessors scaring the English witless by charging at them painted all-over blue does have some historic support. Whilst fbb was on his big adventure (more next week) on Wednesday, the rest of the fbbs visited Harlech Castle.

Even Mrs fbb was impressed by the free car parking at Harlech Leisure Centre and the FREE Park and Ride bus ... 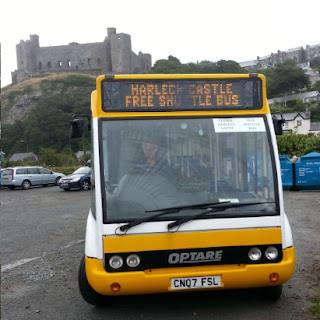 ... which ascends the heights to the entrance where parking is almost impossible. The bus is operated by Express Motors.

Anyway, whilst in the Castle, they were able to obtain a copy of the words of the song which later became "Men of Harlech". Translated into English, it adds something to the "woad" debate.


What's the use of wearing braces,
Hats or spats or boots with laces,
Coats and vests you buy in places
Down any city road?
What's the use of shirts of cotton,
Studs that always get forgotten?
These affairs are simply rotten--
Better far is woad.

Woad's the stuff to show men,
Woad to scare your foemen
Boil it to a brilliant blue
And rub it on your back and your abdomen.
Ancient Britons never hit on
Anything as fine as woad to fit on
Neck or knees or where you sit on--
Tailors, you'll be blowed!

Romans crossed the English Channel
All dressed up in tin and flannel;
Half a pint of woad per man'll
Clothe us more than these.
Saxons, you can keep your stitches,
For making beds for bugs in britches
We have woad to clothe us which is
Not a nest for fleas.

P.S. "Woad" is NOT an fbb composition but he does remember singing it lustily "round the camp fire" at Crusader Holidays some 55 years ago.
Next Bus Blog : Saturday 17th August
Posted by fatbusbloke at 02:00