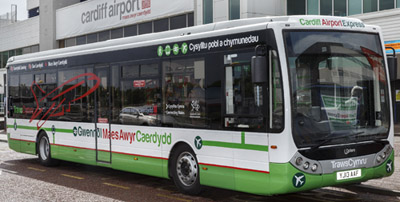 Introduced in a hurry on 1st August, some press release quotes are of interest. 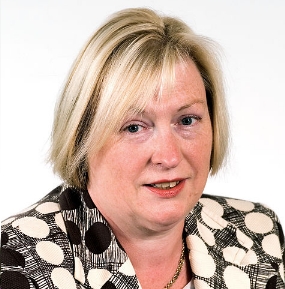 ... Minister for Business, Enterprise, Technology, Science and buses to the airport said,


“The Welsh Government’s vision for the development of Cardiff Airport includes making it easier for passengers to travel to and from the airport using public transport. This service provides a modern, convenient and comfortable link to the city centre at a competitive price.” 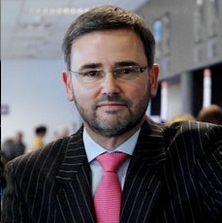 
“It is great to see the new Cardiff Airport Express service launched. This new service greatly enhances the airport’s public transport offer, something sought in the feedback we receive from our customers. It will play an important part in the overall process of improving connectivity to the airport.” 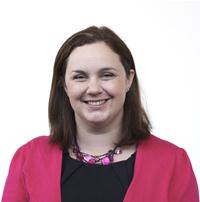 ... was ready to score a few political hits,


“This announcement is all a little rushed. This major project was first announced four years ago, but has been unveiled today, just four days before the first bus starts. We also have the vague promise of the ability to buy tickets online at some unspecified point. While this is welcome news, it would have been better if this service had started four years ago, when it was originally announced by Ieuan Wyn Jones. The airport then had twice as many passengers and many more routes than it does today."

She's got a very valid point!

"I wish this new service well and would like to encourage residents across South Wales to use it. I only hope that the Welsh Government markets this service properly so that travellers are fully aware of it.”

Which neatly brings fbb to a search for timetables.

That on Traveline Cymru is incomprehensible ...

... with every journey duplicated and running to a different terminus on "Date 1" (but the place names have been overpasted by fbb to squeeze the timetable down to bloggable size).

CORRECTION : A later version of th T9 on Traveline Cyrmru is better by far. 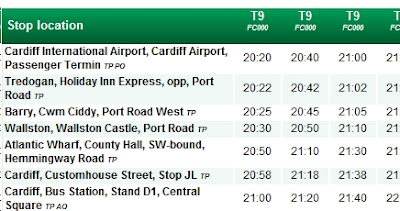 CORRECTED CORRECTION : it transpires that both versions of timetables are present on the Traveline Cymru web site. But there are so many twiddly bits and slidey bits that fbb is unable to offer a guide as to which version appears where.

... i.e. not a lot! But, terrier-like as ever, fbb eventually found a real timetable c/o South Glamorgan council. 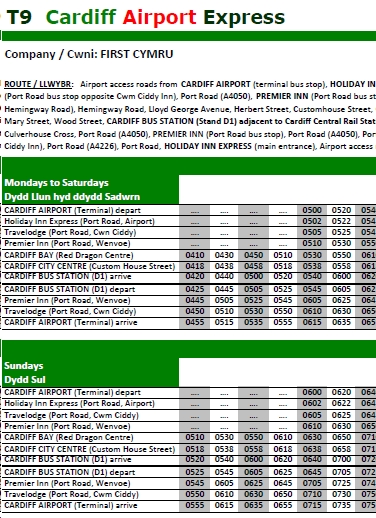 The airport's bus and train publicity was amended to include a reference to the T9; but also advises the X5 ...

... which no longer runs; this despite the fact that times appear on Watts Coaches web site! 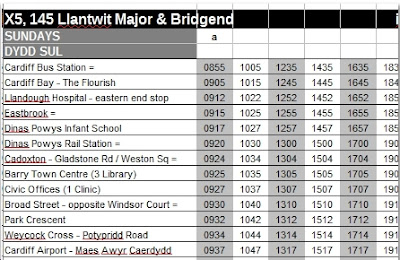 Surely a thrusting go-getting modern airport ought to be publishing actual timetables of the new T9, plus the rail option, together with fares details; if they really want to encourage custom. Cross-referencing to other web sites is a poor "cop-out". Will the customer service desk sell tickets? If not, why not?
----------------------------------------------
**Eluned : Saint Eluned (Welsh: Eiliwedd; Latin: Almedha (Elevetha); also known as Aled, Anger, etc.) was a 5th- or 6th-century virgin martyr from modern Brecon. The Catholic Encyclopedia (1909) calls her "the Luned of the Mabinogion and the Lynette of Tennyson's Gareth and Lynette." Her small chapel and holy well at what is now Slwch Tump ... 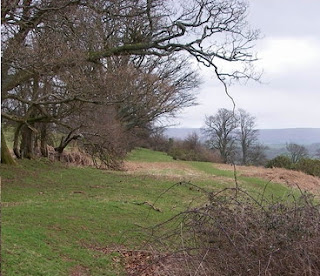 ... were destroyed during the English Reformation. 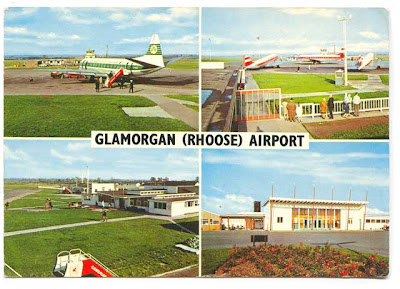 ... from the early days of the airport. Click on the card to enlarge. 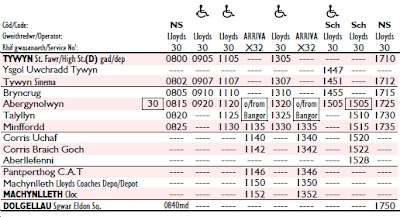 This is todays version c/o Lloyds Coaches and Gwynedd Council. 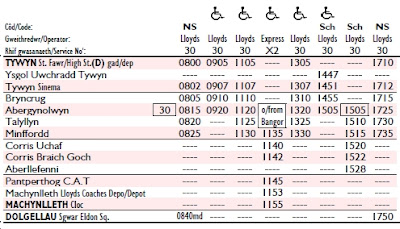 Apart from one less connection at Minffodd, 'tis identical.

But fbb's first port of call was Traveline Cymru's timetable search facility, twiddles, slidey bits and all. YUK! A search for "Abergynolwyn" produced this:-

A search for route 30 produced similar.

The unexpurgated version was on display a the village bus stops. But which is right? A possible clue? Here is this morning's NOTL** 0920 service 30 at Abergynolwyn. 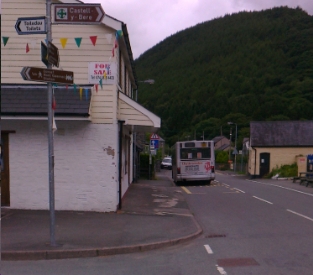 Three Monday to Saturday journeys and a school run omitted from Traveline.

And Gwynedd no longer publishes a timetable book because ...

... as Count Arthur Strong would say, "it's all on the ilfracombe" - so there!

Next Bus Blog : Tuesday 13th August
Posted by fatbusbloke at 02:00