Nearly Full Circle but Not Quite. 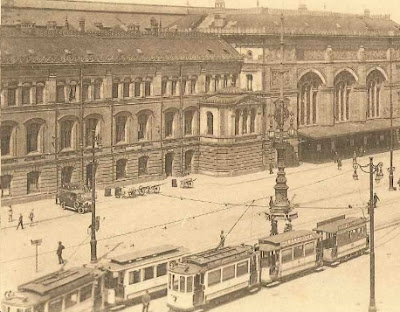 In 1930, the Strasbourg Transport Company started a tram route to Ottrott (see yesterday's blog, read again). The line was 35km long (a little less than 22 miles) and the journey time was a leisurely 2 hours. Electrified from the outset, the route began with street running, as here in Boulevard de Lyon. 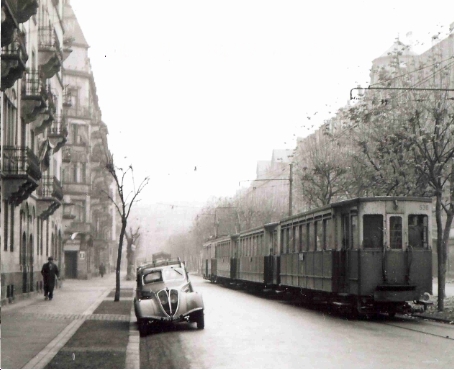 The Boulevard hasn't changed a lot ... 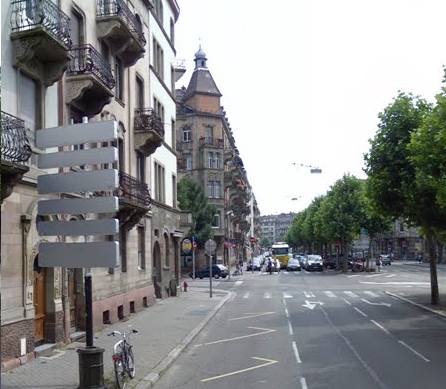 ... note the corner building with the tower, but the station is changed radically ... 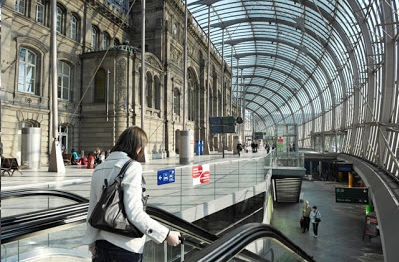 ... with the addition of a huge glazed "bubble", replacing the old building's stone-built magnificence with something more trendy and, arguably, less attractive (?). The whole structure does, however, come to life at night. 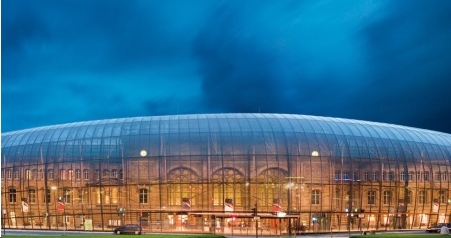 The line wandered through the villages until it came alongside the Roseheim to Saint Nabor line at Saint Léonard, whence it ran parallel the steam railway tracks, seen here with a tram approaching Ottrott. 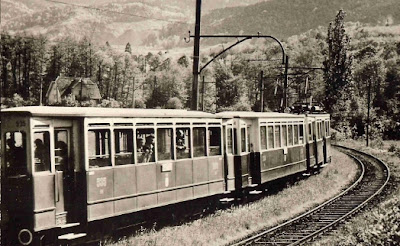 At the outer terminus there was even the occasional connection with a bus! 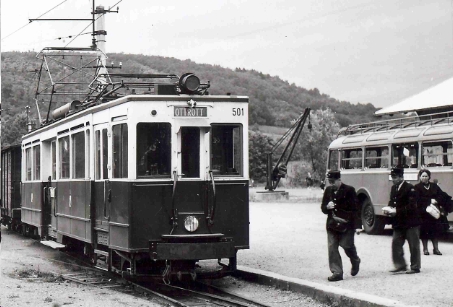 the tramway crossed the railway line between Strasbourg and Barr via Rosheim at Obernai as can be seen in this very crude diagram. 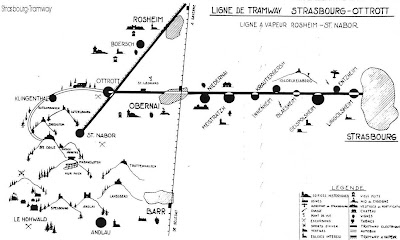 Services do not appear to have been frequent. An on-line source suggests that five a day left Innenheim for Strasbourg.

Despite "une grande manifestation de protestation à Meistratzheim le 11 avril 1954", the line closed in 1955 to be replaced by a bus service. All trams were withdrawn from the streets of Strasbourg in 1960. 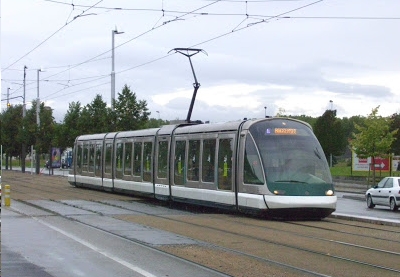 But they returned, to much public acclaim, in 1994; and the network is still growing as is the length of the trams! 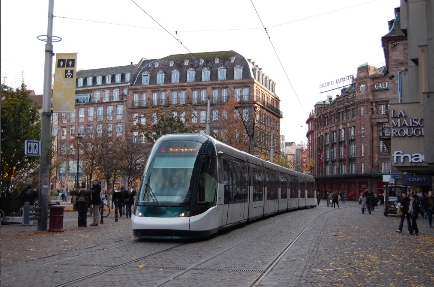 Can we continue to call a seven-car articulated unit a "tram"? Be that as it may, all this brings us neatly back to Rosheim. As the network expands, Strasbourg (French) trams will run across the border to Kehl in Germany from 2015 and, from some time after 2018, the line through Rosheim and Obernai to Barr will become a "Tram Train" route as an extension westwards of line C from its present terminus at the station (diagram, top left). 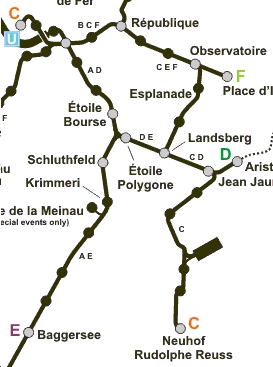 Extra stops (stations?) are proposed, notably at Obernai, but the deprived Rosheimers will still have a lengthy 2km toddle to hop onto their new trams. 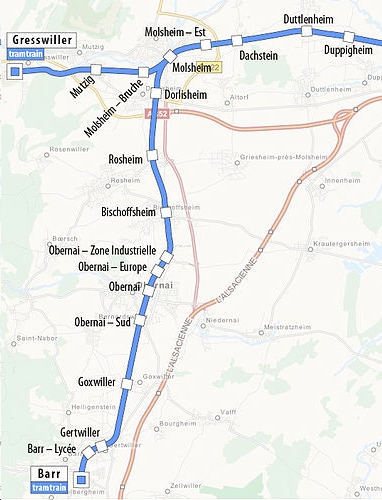 Unless, of course, the plans include new bus links into the tram stops. The proposed timetable provides for a tram every 15 minutes to Barr, two each hour calling at all stops with the other two running "limited stop" to Molsheim, then all stops to Barr. A similar pattern will apply to the line to Gresswiller.

One thing is certain, Euro-trucker David would not have expected five blogs to emanate from his initial phone call from the platform at Rosheim station.

And, finally...
... a YouTube video of a similar "Tram Train" project at Mulhouse (pronounced, roughly, "Mull-Ooze"), just down the road from Strasbourg; well quite  good bit down the road. You see a mixture of trams and tram trains (hard to tell the difference?) and, on the main line, TER and TGV stock. Buses also pass by, so, total integration!

P.S. Thanks to a comment by blog reader Man of Kent on Monday, we can see that the "out of town" bus station in Strasbourg lacks the sophistication of the rest of the town's transport infrastucture! His comment is repeated below.

You may be interested to know that the CTBR bus station ("gare routière") in Strasbourg even has an enquiry office with racks of leaflets for all of the routes that radiate from there (including those that only come as far as out-of-town tram termini; a bit like being dumped at a park and ride site on a bus journey to Exeter, perhaps?). By French standards, the frequencies are impressive - some are even regular interval! "Bus Station" is however a somewhat grand description of what is essentially a bus parking area, around which passengers are allowed to mill uncontrolled, and a series of portakabins.


Next Bus/Tram Blog : Thursday 29th August
Posted by fatbusbloke at 02:00