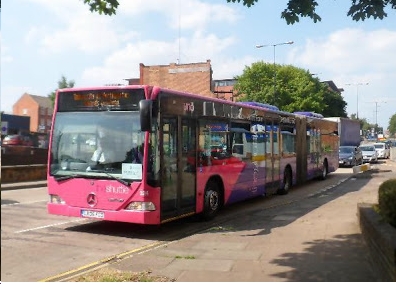 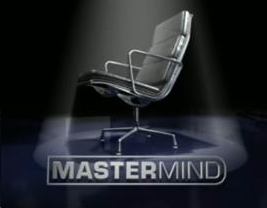 You have two minutes on  London Bus Timetables starting, NOW

Name the official supplier of bus timetables in London?
There isn't one
CORRECT

How many bus stops in London have timetables displayed?
None
CORRECT

How many bus timetables are there on the TfL** web site?
None
CORRECT

How many timetable leaflets does TfL** print annually?
Usually none
CORRECT

How could you know how long a bus journey might take?
You couldn't
CORRECT

What is the London Mayor's policy on bus timetables?
Ooh, er, golly gosh; you don't need them, do you? Cripes!
CORRECT

Who is Robert Munster?
If I answered, I might have to be shot
CORRECT 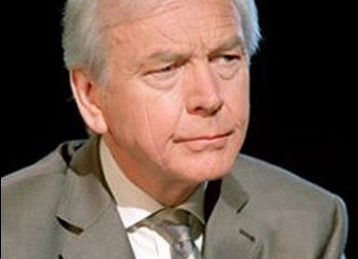 
fbb has arrived at South End Green or Hampstead Heath (or not?) and his aim is to ride on the "Borismaster" (New Bus For London) all the way to Pimlico ... 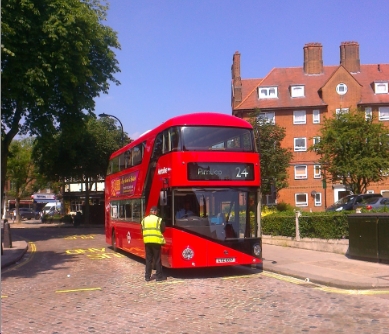 ... and back. So, it is reasonable to want to know how long this trans-Metropolis trek will take.

Although fbb's trip was on a Saturday, the following comparisons etc. will be for the Monday to Friday service. On Saturday most journeys are for leisure, shopping etc.; whereas on Monday to Friday people's travel may involve tight timescales or interchange with other transport modes. So accurate timings may be more important.

The boarding stop has the following information:- 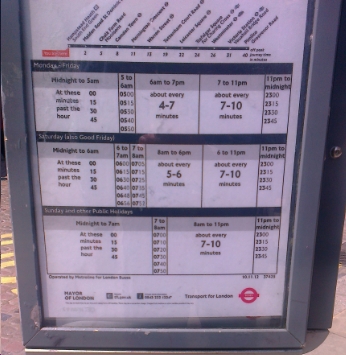 But, being more prepared than most, fbb has also downloaded a similar copy from the TfL web site. Here are the Monday to Friday times on-line. 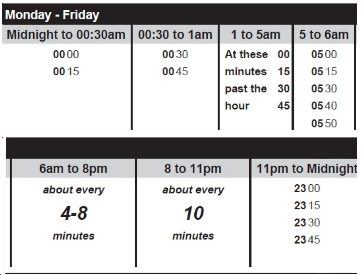 Note that they are different! Leaving aside the odd on-line presentation of times between midnight and 0100, and ignoring the weird mixture of 12 and 24 hour clock systems on the same panels (in the same "sentence" with 0030 to 1 am!!), they are still different!

It accurately (well nearly) shows the exact frequency for the departure stop at South End Green. "Nearly" because between 0630 and 0730 buses run every 4 or 5 minutes to allow the service to maintain the 6 minute frequency as traffic builds up later in the route and slows the buses' progress. Whilst fbb's panel was created manually, he is certain that a bright 7 year old could write a simple confuser program to do the job "sustainably".

It may be better; but it still isn't a timetable. The panel at the bus stop says that the average journey time is 40 minutes. Of course that is utter drivel. It is simply wrong! The panel from the on-line page looks a bit better ... 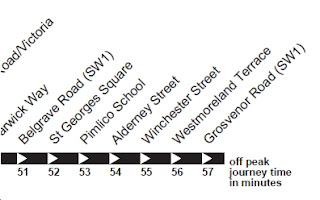 ... at 57 minutes "off peak", whatever that might mean. But, frankly, an average or "off peak" time is about a much use as a chocolate teapot. This is a sample of the service 24 "running times" in minutes hour by hour on Mondays to Fridays from South End Green to the Pimlico terminus.

57 minutes applies to trips around 2000 which is a weird definition of "off peak". There is a 65% increase from the quickest to the slowest; which is why we need access to a timetable.

So we should all be grateful to Robert Munster. Currently awaiting a decision on Political Asylum from the Laird of Rockall Island, Munster flies in the face of danger by publishing all London Buses timetables. This act of self-effacing whistle-blowing is both highly commended and very risky.

But, sooner or later, the Transport for London Gauleiters will find him; and a sentence of an eternity listening to Boris's speeches is inevitable.

Munster's site is (here) but beware. As Edward has revealed ... 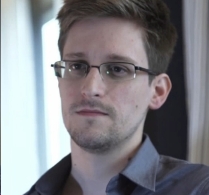 ... "they" are watching your internet!

But never mind. Thanks to Robert Munster, fbb was able to work out that his return journey from Hampstead Heath (aka South End Green) to Pimlico and back would take about 2 hours and 20 minutes - to include a photo stop on the banks of the Thames at the "Pimlico" terminus.

So we had better take a ride on this revolutionary, iconic and controversial New Bus for London.

And before you add a comment along the lines of, "Why doesn't the fat idiot use the journey planner?" ... 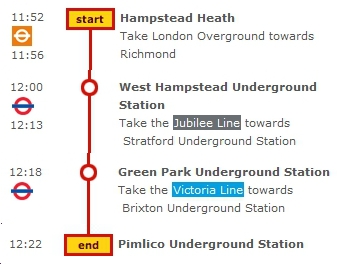 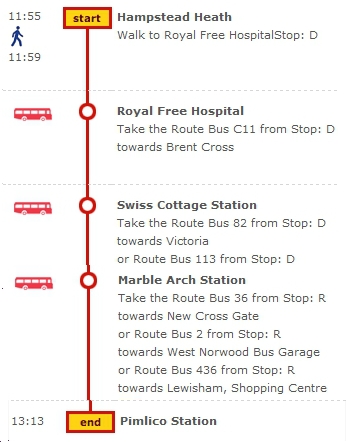