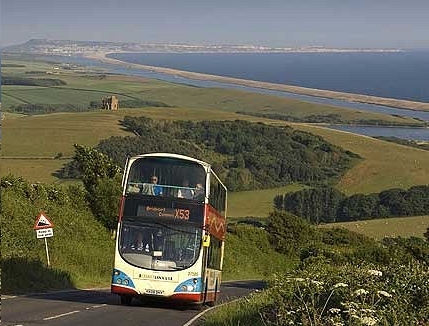 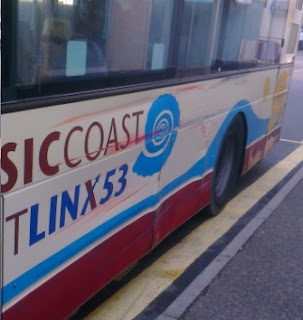 So yesterday (Sunday) fbb timed his morning "constitutional" to meet the 0733 from Seaton to Exeter; thus being on hand, just in case it were to be the launch vehicle in the new livery. Unlikely statistically; but best be prepared.

Except fbb wasn't; having forgotten to put his phone on charge, and thus quickly discovered that the flattery was utterly bat.

And it was the repainted vehicle! 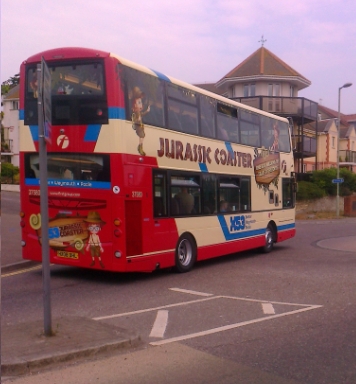 fbb just managed to clickkit on his way to Church and the bus's return from Exeter. It features a couple of Yosemite Sam clones, called "young explorers" and  a frieze of  foliage fronds along the top deck windows. It has lost its "Jurassic Coast" logo ...

... understandably as the service is now entirely commercial with no local authority funding. Cut-backs have ensued, with "fringe" journeys getting the chop, but a two hourly frequency remains seven days a week but with the Sunday service running during summer months only.

The outside of the bus has been changed to feature two characters (young explorers) and the design references the millions of year’s worth of history that a trip on the bus helps people access. Internally the bus has been refreshed with leather seats. Internal "cove panels" are updated to better reflect the great things that the region has to offer. For instance one of the panels highlights how Lyme Regis has a World Heritage Coast Status, putting it on a par with the Great Barrier Reef in Australia, while another points out that Weymouth is world famous for its sand sculptures.
---------------------------------------------------
Back to today's offering ....


No! fbb has not taken up knitting but Mrs fbb has kindly supplied this visual aid to explain the geography of the area. 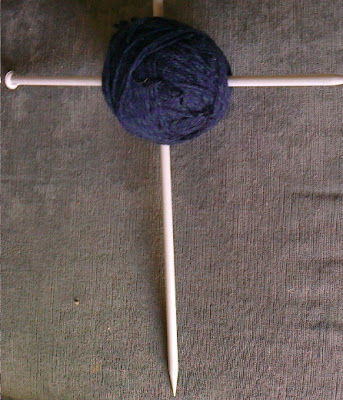 Rotherham is at the base of the "T"; Barnsley at the left hand end of the crossbar; Doncaster is at the right. Note that the visual aid is most definitely not to scale! The ball of wool represents the cluster of industrial communities that form (used to form?) the pulsating heart of the Dearne Valley. Bus services in the area were the exclusive parvenu of Stagecoach, successors to Yorkshire Traction (red buses) and Mexborough & Swinton (originally green). 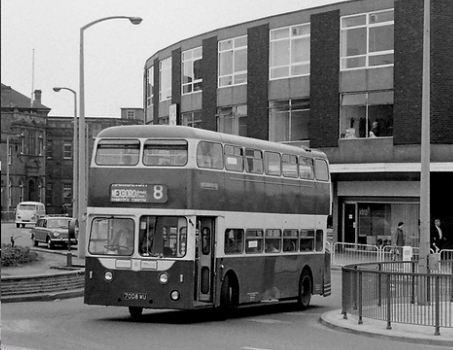 The applecart was well and truly upset when First Bus "invaded" the Stagecoach area with its competitive service 22 running every 10 minutes and (mostly but not quite) following the Stagecoach 229 route. The story is told in fbb blogs as below:-


First's 22 and Stagecoach's (delayed) Magicbus X22 response were, until the weekend, additional to the "traditional" network; but the X22 only ran between Rotherham and Wath. 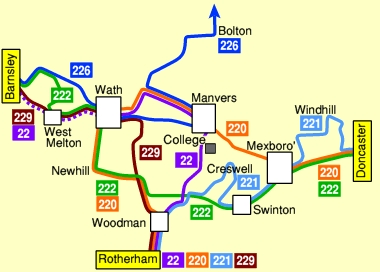 Apart from the various and additional 22s, all the routes ran every half an hour. This provided a bus every 10 minutes between Barnsley and Wath, a similar frequency between Mexborough and Doncaster, and another "every 10" leg from Rotherham to Woodman Inn roundabout. Things were not quite so straightforward in the "ball of knitting wool" in the middle!

So let us begin with what hasn't changed.

22  The intruder from First Bus remains unchanged at every 10 minutes with no evening or Sunday service.

226  Runs from Barnsley to Wath, then via the old Doncaster Road ... 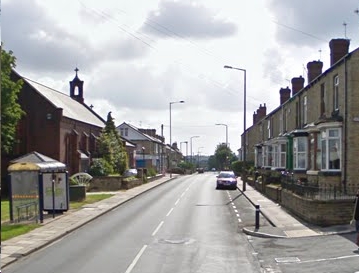 ... to Manvers. Here the route turns back on itself along the new Manvers Way ... 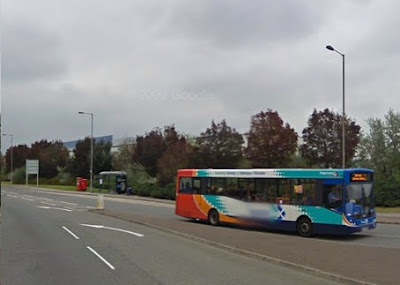 ... (now used by all other Dearne Valley routes) before turning north via Bolton upon Dearne.

221  Still runs from Rotherham to Woodman Inn roundabout (confusingly labelled "Swinton" which it isn't) then diverts via the Cresswell Estate ... 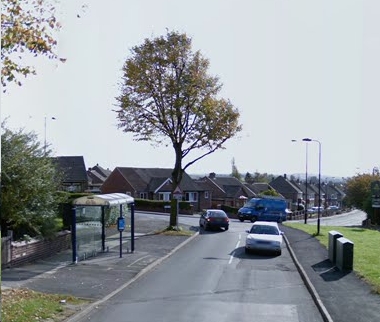 ... calling next at the Swinton station interchange ... 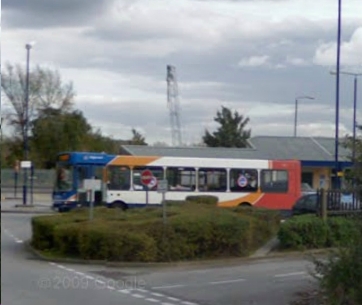 ... before arriving at Mexborough. The route then diverts via the Windhill estate before re-joining the integrated frequency through to Doncaster. Sadly the old Adwick Road trolleybus turning circle and shelter have gone, but note the later clock from "the good but slightly less old days". 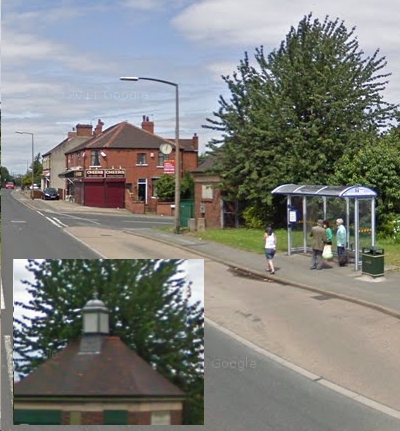 The electricity sub station behind the trees, with its original clock tower (now clockless), still stands to remind us of good things in the past. 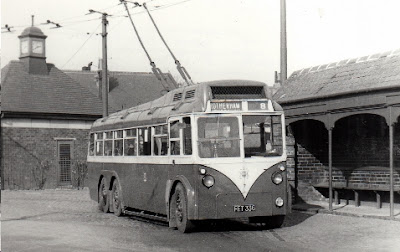 For completeness, fbb should report that there are other Stagecoach routes in the area, some of which have changed but some haven't. To avoid being too academic in his review, fbb has stuck with the traditional routes that serve the T in the Dearne Valley.

So next we must try to understand the rest. Hold your breath! 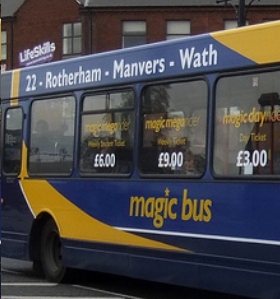 But, as befits its prestidigitatory name, Magic Bus has ... 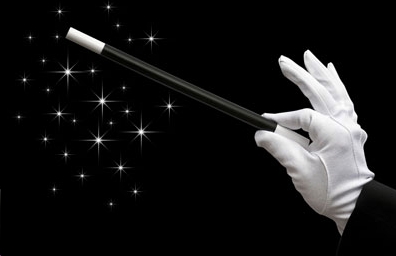