parading on the Parade - perhaps? 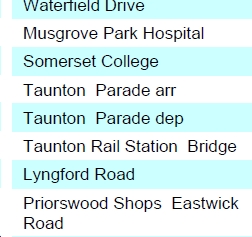 Readers who have been interested enough to follow fbb's analysis of bus infromation in Taunton (perhaps they should get out more?), will be aware of the problem. It is, as always, location, location, location. The bus station was easy 'cos the chubby one arrived there on his trek from Seaton. Castle Way is often map-less but, in fact, jut across the road from the bus station. 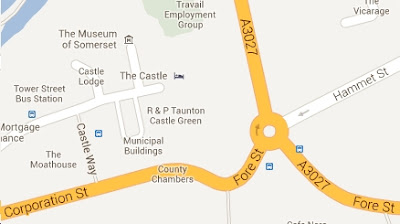 The Parade appears on no maps; not quite true, to be fair. Transport Defunct's "find a map" will get you to the location, although no such road name appears. There are no "to the Parade for (other? local?) buses" signs anywhere. But there did seem to be a steady stream of Tauntonians walking across Castle Green and through an archway. 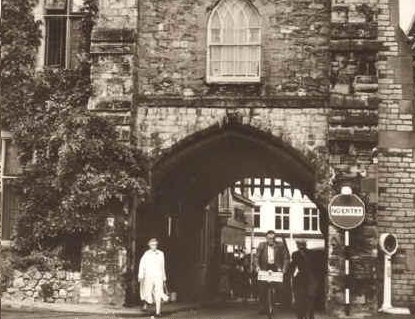 [fbb fogrot to photograph same, so tense was he on this stage of his bus stop search.] And lo, and behold, beyond the archway, there were bus stops all over the place. North Street, Fore Street, Corporation Street and East Street all sported shelters and flags and were clustered around a "significant" monument. 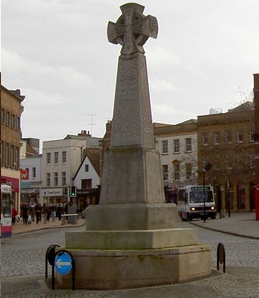 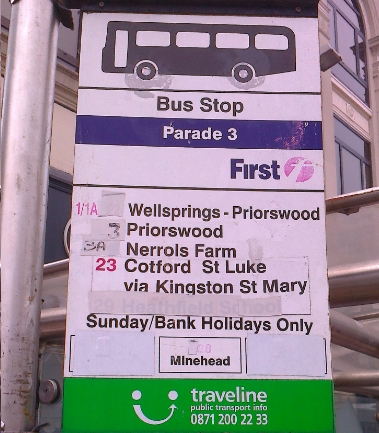 fbb asked a man who was promoting a charitable event from a table near the above stop. Dressed in military style blazer, complete with crinkly gold badge (the blazer, not the man!), the gent didn't look like your typical bus passenger. Yet, in response to a polite, "Could you tell me where 'The Parade is?' he waved his hand in an expansive circular gesture, "Well this, all round here, is 'The Parade'."

So fbb had, as they say, cracked it. The Parade isn't a road name, which is why it isn't on any maps; it's a historic local name for the area round that monument; it is, effectively the "Town Centre" for Taunton buses. 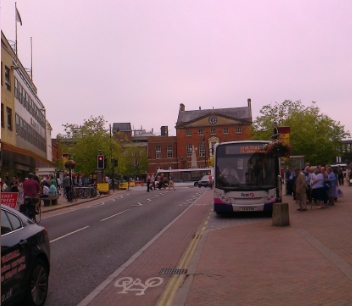 And there are First Bus routes that stop here but don't go to the bus station, although there was nothing in the bus station to tell you this. As to which buses stop where in the parade, no idea at all. The only sort-of negatively helpful notice told fbb that Stageoach 99 didn't, temporarily, because of road works. 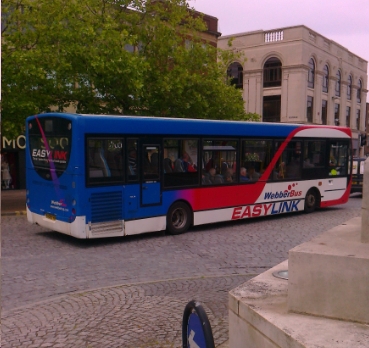 Some Webberbuses stopped there and the Park and Ride ... 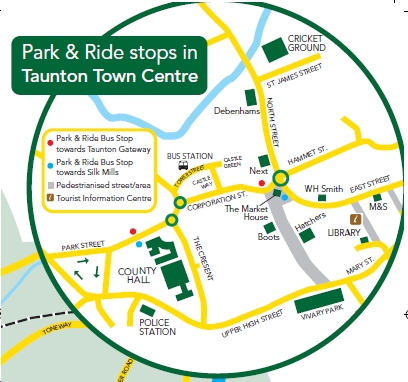 ... stops at that red dot on Corporation Street (below "Next"). And the posh buildig at the end of  North Street ... 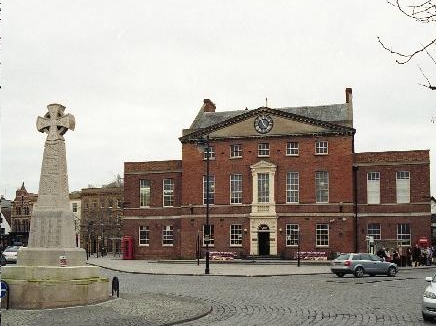 ... is called The Market House. The Park and ride leaflet doesn't mention The Parade at all. As a frustrating aside, neither the official leaflet, nor Webberbus' webbersite give a timetable for the Flyer, aka park and ride. so we have no documentary evidence of what they call the town centre stop. It might be "The Parade"!! Just to compete the information package, it's called "The Burma Monument".

Memorial to the dead of Prince Albert's Somersetshire Light Infantry. The Third Burmese War 1885-86-87. Ashlar Celtic cross with tapering shaft standing on a plinth of 3 high steps, Cross and shaft are decorated with chubby Celtic detail, mostly interlaced with some foliage panels on south side. Names of main battle honours including Egypt, Burmah, Azim Curh, and Jellalabad are carved in thick letters towards the base. Full battle losses given by inset lead letters. Relocated to present location in 1996. 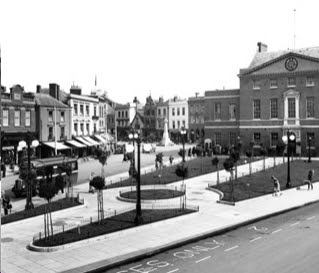 Surely Somerset and/or Taunton Councils could do better than this? Well, there are plans for a new bus station. A report from consultants Atkins suggests several possible sites and comes to the following conclusion, paraphrased by fbb.

"There are advantages and disadvantges with each site, so the Council needs to decide." 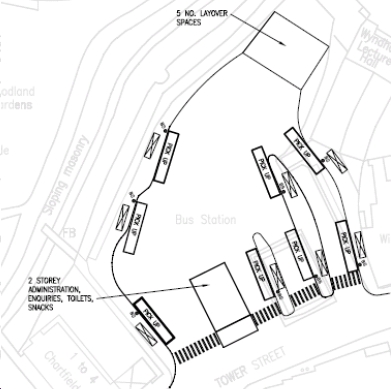 If you want about as much excitement as watching paint dry, you can download the Atkins report (here). If that is too much for you, then ponder this; why does the Council need to pay Atkins to make its decisions for it. It is blindingly obvious that bus stop provision in the town is baffling and mysterious. So why not get on and do something rather than wasting dwindling resources paying outsiders to have a guess for you.

In the meantime, surely a few direction signs, better labelling of bus stop flags and bigger print for the timetable displays would cost little and be very helpful. With very little expenditure and, perish the thought, a little common sense, visitors and residents alike could make a better fist of finding bus services. Then they might start using them?

And the promised investigation of Taunton's Tourist Infomation Centre (RIC)? Well; nice Mr First Bus (?) is changing the Taunton area services from 28th July. fbb thinks it will be a cracking wheeze to revisit the town on the following Monday (29th!) to see how well the changes have been promoted. And to see whether the TIC knows what's going on. Just over two weeks before we find out!