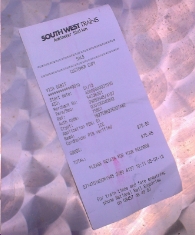 
The London, Chatham and Dover Railway (LCDR) was authorised to build the line by the South London Railway Act 1862. Designed and engineered under Frederick Banister, it re-used the existing Wandsworth Road to Brixton section which had been built as part of the LCDR main line. This line was quadrupled and the extended to London Bridge.

In 1909, the London Brighton and South Coast Railway pioneered rail electrification in the UK by introducing electric trains on this little semi-circular line, and the first electric train ran on 1 December. The original electrification used the overhead system at 6700 V AC, supplied by a power station at Deptford. 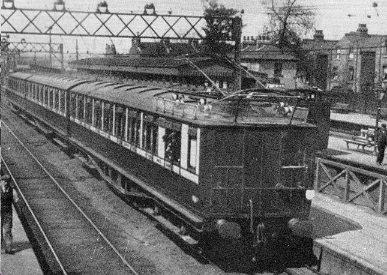 The line was converted to Southern Railway standard third-rail 660 V DC on 17 June 1928.

When the Overground East London line added a section between Surrey Quays and Clapham Junction in December 2012, the long-standing London Bridge to Victoria service was withdrawn to the accompaniment of a vociferous local protest campaign. But to no avail; although an alternative proposal for service from Victoria via the South London line to Bellingham might yet materialise (purple on the map below). 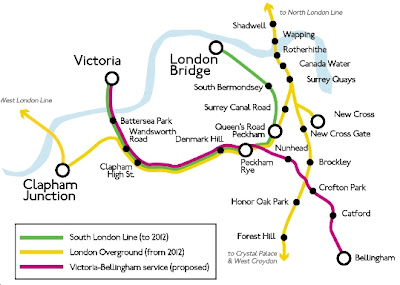 But the existing service deprives Clapham High Street and Wandsworth Road of through trains to both termini, but to Victoria in particular. Whilst a change at Clapham Junction is possible, it would involve.a long, long trek over the near eternal footbridge and a much slower journey. But it was across this footbridge that fbb trudged to explore this new bit of Boris's Overground train set. 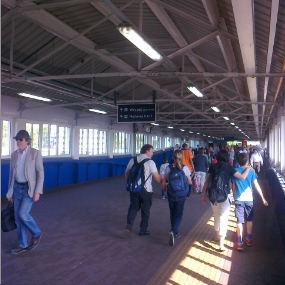 Once upon a time, trains for Kensington Olympia etc could have left from Platform 1 ... 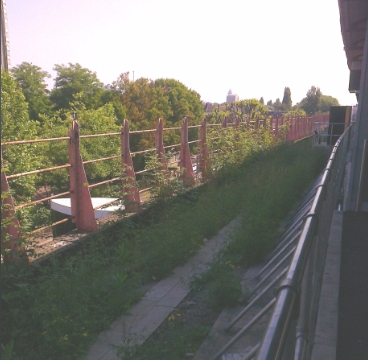 ... but no longer. Apparently the steelwork below (called "The Banana Arches" because they're not arches and appear to have nothing to do with bananas) is too frail to support trains.

So the cunning chaps at Network Rail have renamed Platform 1 as Platform 2 and glued an extra bit on to make a new Platform 2. 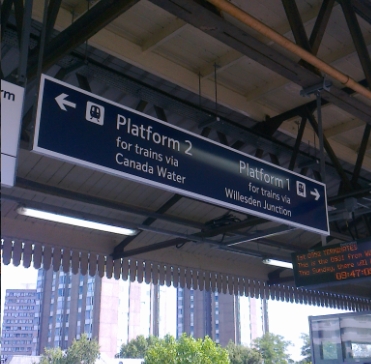 Here we see Platform 1 (was 2) buffer stops and the sticky-out bit that makes the new Platform 2. 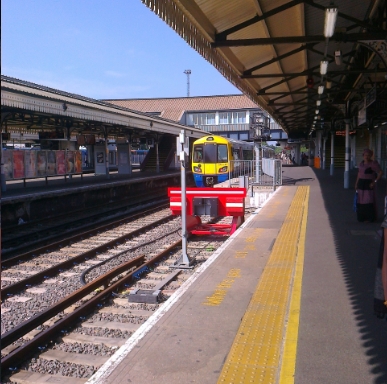 Clever eh? Not only are the platforms staggered but so was fbb at the crowds alighting from Overground trains. These hoardes are from the former South London Line. 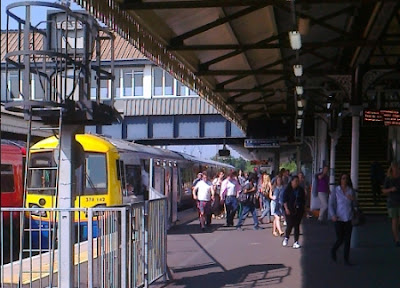 Train from the other pat of the circle were equally well loaded at just after 0945 on a Saturday!

To get from Clapham Junction (which isn't in Clapham) to Wandsworth Road, the trains follow a really wiggly bit of line that was opened in 1873. 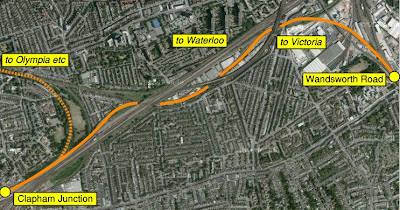 It passes under the tracks to Waterloo, then under the lines to Victoria twice before curving sharply round to Wandsworth Road, never the most luxurious of stations ... 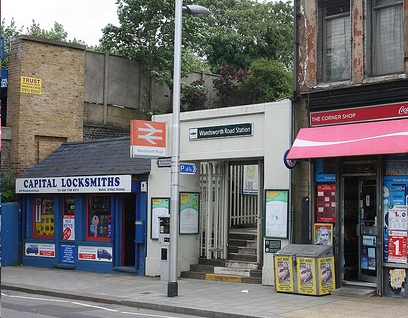 ... although much improved since King Boris took over!

The Northern Line station is the white blockhouse to the left. Boris' Overground runs on the bridge to the right with the entrance just beyond the right hand footpath. Not far at all.

The South London Line passes above Brixton but there is no station. The geography, history and current situation are complex and worthy of a separate Brixton blog in due course; but the next three stations, Denmark Hill, Peckham Rye and Queens Road Peckham still retain a Southern service to London Bridge ... 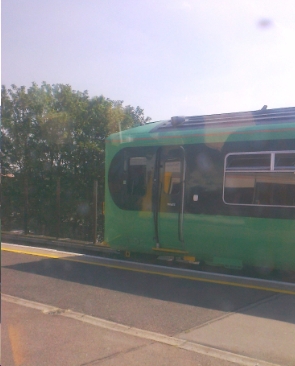 ... in addition to the Overground frequency.

Then comes a new bit of line. 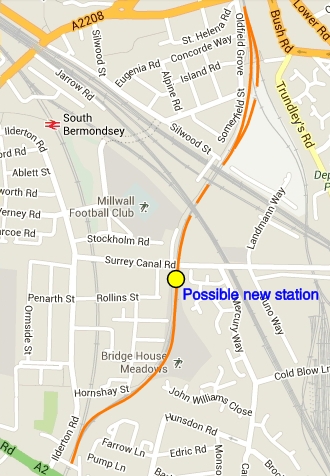 The link between Queens Road Peckham and Surrey Quays (formerly Surrey Docks) was effectively closed in 1913 and parts became open space and a public footpath. Boris originally had a scheme for a new station close to the Millwall football ground at Surrey Canal Road but decided it would be too expensive; but the space is "protected" so it can be added later. And there are development schemes which will provide enough pennies; all being well. 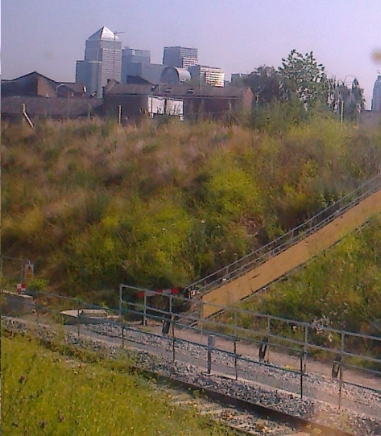 Here the westbound tack has just "dived under" the lines to New Cross and New Cross Gate with the distinctive towers of Canary Wharf in the background.

Statistics for the "new" South London Line have yet to be published but fbb's unscientific and subjective experience of one trip on a hot Saturday in June, suggests that far more are using it than latterly used its much mourned predecessor.

From Surrey Quays, fbb's train becomes part of the muck extended East London line, ultimately terminating at Highbury & Islington. From here the chubby (and by now rather sweaty) one can nip (haha!) across the footbridge for the second half of the mega circle ... 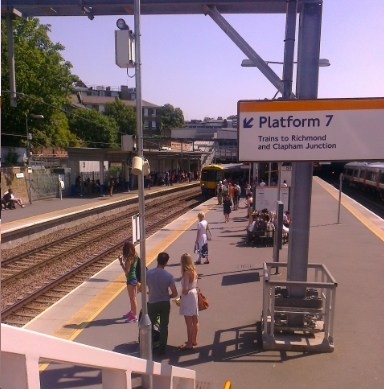 ... where a three minute connection is happily achievable, even by the creaky and elderly! This train would take fbb back to Clapham Junction to complete the "circle". But fbb would break his journey at Hampstead Heath.

The borismaster trumpets its welcoming call! 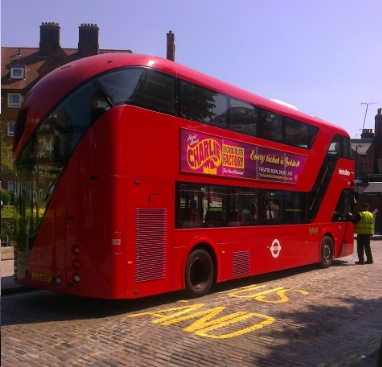 Trumpets? Boris has described his omnibological creation in poetic terms; "as emblematic as the elephants of the Serengeti, whose noble and domelike brows they resemble."

Next Bus Blog : Wednesday 17th July
Posted by fatbusbloke at 02:00