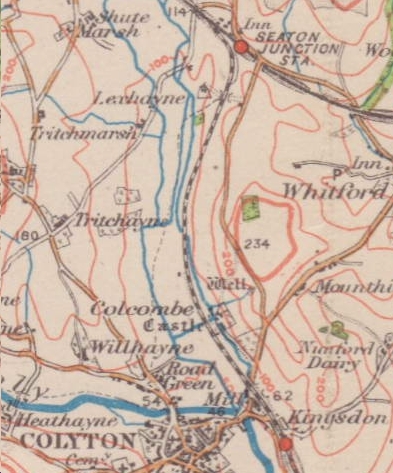 
Seaton Junction station buildings remain in place near the village of Shute ... 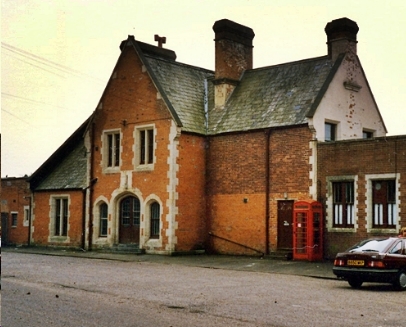 ... and an aerial view still shows the track of the branch curving away from the main line. The two footbridges, one serving the original station platforms and the other (the long one) part of a public footpath, still stand. 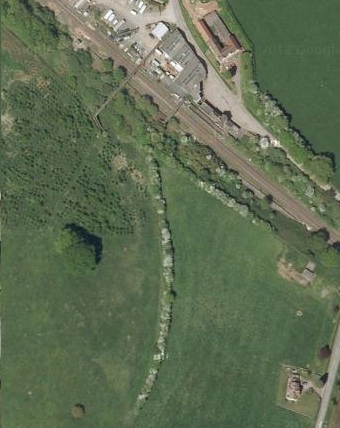 A combination of nature and agriculture have removed all but a few bushes from the former trackbed. At Colcombe Farm (site of the former Colcombe Castle) an unusually smooth geometric curve to a farm track is a give-away ... 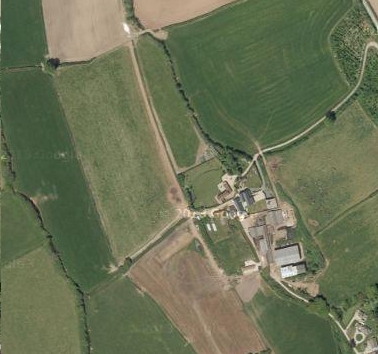 ... and bridge parapets as Colyton is approached on the Whitford Road whets the explorer's appetite. 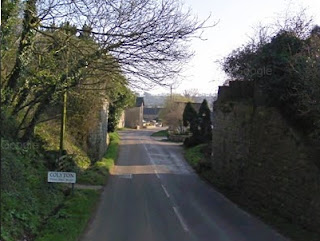 Similarly the parapets of the bridge over the lane leading to Colyton Station are still firmly in place. 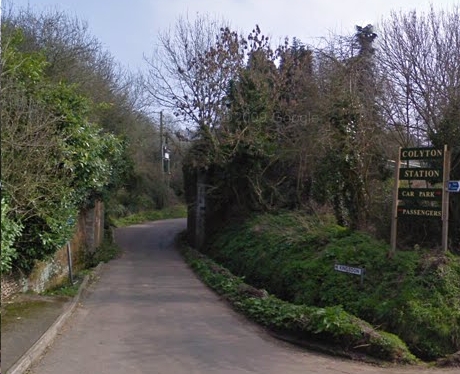 And so we arrive (on foot or by car) at Colyton Station. It has been adapted to its present tourist role with railings now installed along the platform edge but at least some shots remain in early tramway days before the development. 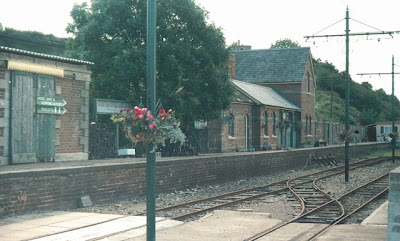 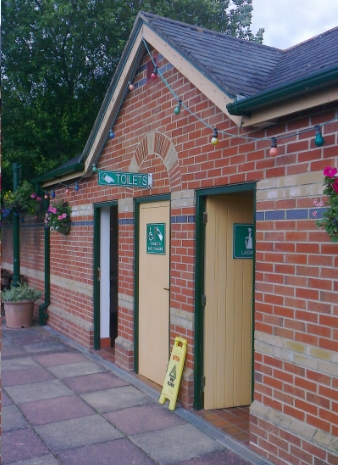 ... and there is yet further delight within. (At least there is in the "stand-up" part of the Gents; fbb's journalistic drive was not strong enough to encourage him to check the Ladies.) Instead of adverts for car insurance or small rubber items (?) we can read this:- 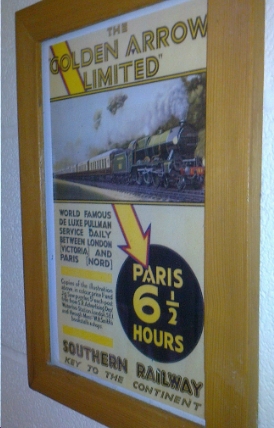 And we could once purchase our jogssaw souvenir of the crack express ... 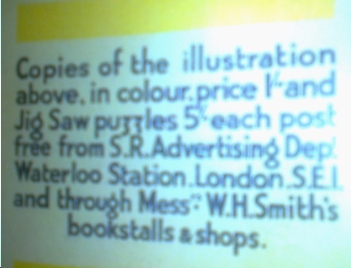 .. from Messrs W H Smith at 5/-. [25p but equivalent to an inflated £14 in 2013 - not cheap!] fbb thinks it is unlikely that Eurostar would offer something similar today.

And the station building houses an excellent cafe ... 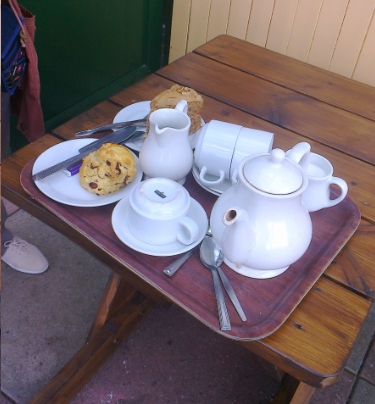 ... serving a good cuppa and mega slices of cake to fbb and Mrs. Yummy yummy!

Colyton's former goods shed is still recognisable, although the main loading doors are blocked to allow the premises to be part of Colyton Antiques Centre. 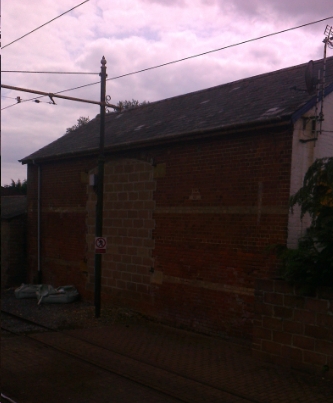 It just helps the visitor to remember that, once upon a time, the Railways were legally designated a "common carrier". This meant that they had to transport anything and everything. The (daily) pick-up goods was a lifeline to the community before the motor lorry became de rigueur.

One piece of good that the Southern Railway carried was its own lineside huts. Several are now in use for tramway purposes. 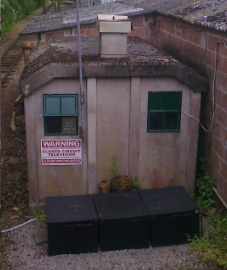 The unusual shape of the roof was so that the whole hut could be craned onto a flat truck (minus the chimney which was tucked inside) and subsequently unloaded beside the track.

Amazingly three signal posts remain. One is hard to spot as it is completely overgrown with foliage (hence lack of an fbb photograph). Number two is just a pole ... 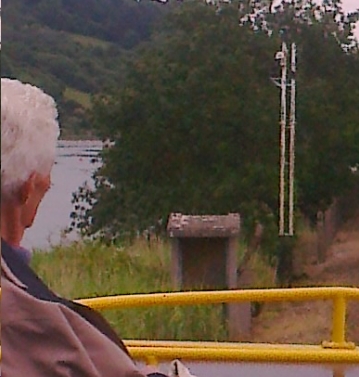 ... but the third example still has the remnants of a "fixed distant" signal arm attached; sadly with a piece missing since the pic was taken. 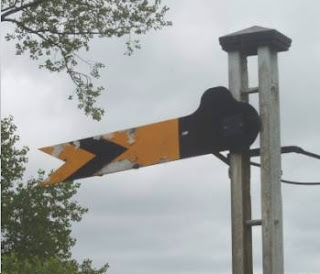 The arm was never raised; it was a fixed warning of the need to slow or even stop for Colyford station and level crossing. It is just a chunk of cut-out plywood!

Many take the tram simply for the experience; the views are delightful. 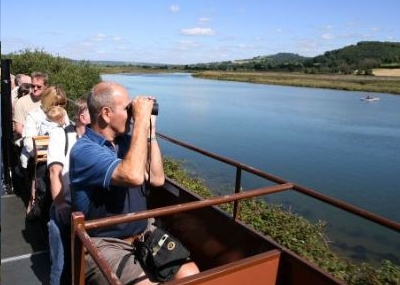 Some join Nigel Molesworth and revel in the delights of the rich and varied wetland and estuarial bird life. 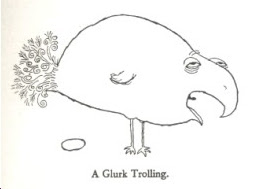 But fbb likes to close his eyes and imagine being hauled by an M7 tank loco chuffing gently longside the River Axe; perhaps with a stop at Colyford for a cream tea in the Old Forge cafe. Colyton via Colyford to Seaton

And, upon returning for the next train and replete with the cup (several cups) that cheer, fbb would be glad that the Southern Railway had installed a splendid gents urinal on the platform. And it's still there but, sadly, no longer operative. 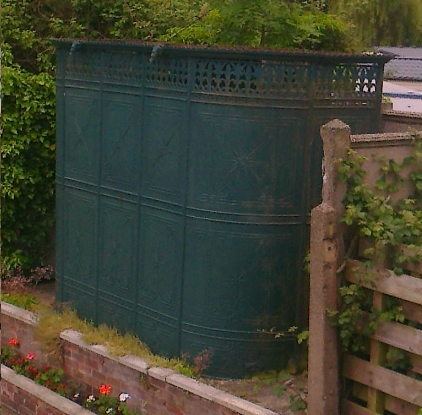 Trams run daily throughout the Summer season. If you come by train, connecting buses (Axe Valley 885) run every hour Monday to Friday and every two hours on Saturday from Axminster station. Alight short of Colyton at this distinctive lamp post ... 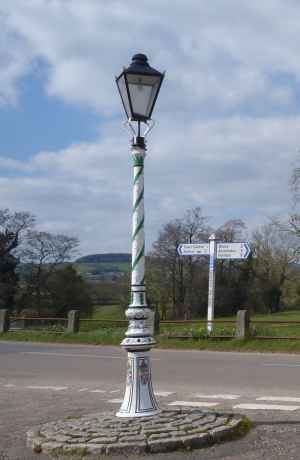 ... and you are less than 5 minutes from the tram.

Tramway web site (read again) : fbb has no financial interest in the tramway!