A Toddle to Toilet-less Tadcaster On the last day of the fbb's break in York, Mrs and friend Julia decided to have a look round the shops, take in the open top bus tour and ride of the "York Wheel". Meanwhile, fbb was allowed off his leash to do what he enjoys, namely have a ride around on the buses. Unfortunately the weather was less than conducive for bus riding as most vehicles were only a few degrees cooler than the surface of the sun.
Nevertheless the hot and sticky chubby one went to Tadcaster, known universally and locally as just "Tad".
Why Tad? Firstly because he had never been there before and secondly because of this:-

The real time information at York is a real mess. Not all services are included in the system and different types of screen and display make the whole thing very user un-friendly. fbb has blogged previously about this, see "York : ID : ten : TIC" (read again), published on 16th June 2010. Frankly, in two years, nothing much has changed. 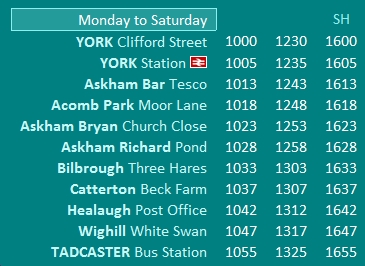 Service 37 provides three tendered trips "round the villages" on Saturdays and non-schooldays, two on schooldays. Mysteriously this service is the ONLY southbound "country" route shown on the screens. Annoyingly the screen display is at the wrong stop as well! Other more frequent and "prestigious" services, like Coastliner's every 15 minute frequency route direct to Tad and Leeds, simply don't appear. Why? No idea!

The villages served by the 37 are pleasantly rural but one provides something of a surprise:- 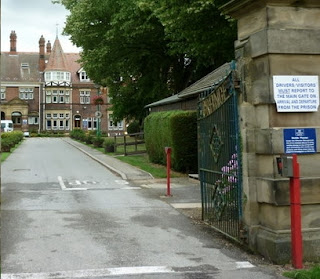 Located in Askham Bryan, just across the road from the pond, is Askham Hall Women's Prison which often provides passengers for the 37; not escapees, but ladies off to do their days "rehab" work.

Wighill White Swan was closed and for sale ... 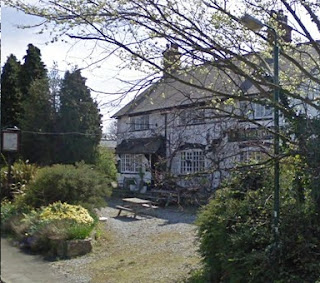 ... when Google's noddy car passed by; and an ever alert fbb did not note the hostelry's current status as he, too, passed by. 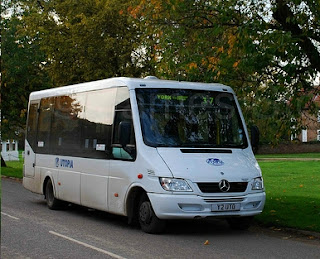 Utopia Coaches of Sherburn-in-Elmet hold the contract for the 37 and fbb's driver was enthusiastic about recent growth in business with a record 60 passengers carried on a recent two-trip day. On his trip, fbb was the only passenger for almost all of the route, the exception being "Old Alf" who travels every day from Askham Richard to Tesco at Askham Bar in York, does a bit of shopping, and returns on the next trip out. Needless to say, Alf is picked up and set down outside his front door. 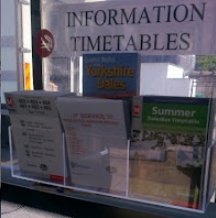 The bus had a leaflet rack with information for all the company's bus services; an excellent effort. For those who worry about low tender prices and poor profitability, fbb's driver explained that the vehicle does a school run in to Tad, returning after the second round trip.

And so to Tad itself where the main industry was (and still is) Beer. Of the four breweries in the town, three still operate. Way back when, two brothers decided on brewing independence which led to John Smith's Tadcaster Ales and Samuel Smiths Taddy Ales. John's business is now a big public company, but "young Sammy (actually Humphrey)" is something of a local "character" and his brew is still local. 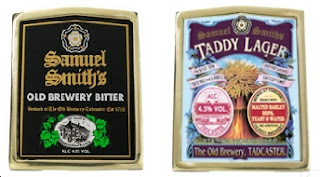 As  fbb's driver explained, "Some in Tad love Humphrey, others hate his guts!"

The return from Tad to York was on Yorkshire Coastliner's frequent and high quality service which will, in due course, have a blog of its own. Suffice it to say, fbb's vehicle had a standing load and was running 12 minutes late. Tadcaster bus station is new-ish and very neat and tidy, but lacking any facilities. The sole toilet (20p) was one of those efforts with a control panel from the moon space mission and it appeared to be busted! fbb declined to insert and thus waste a hard earned 20p (!) and "made other arrangements" which will not concern us here. Certainly he needed to hedge his bets on this one. 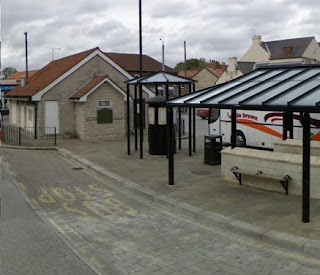 It is odd, though, that the world and his uncle bend over backwards to provide disabled access, low floor buses etc. but the able-loo-needy and able-elderly are often obliged to continue their journeys in some discomfort.

Now about this standing load. fbb likes to think he's not "old" (poor deluded fellow) but on the 844 two polite students from Tadcaster Grammar School both offered the old codger a seat. Thank you very much, young sirs, you are a credit to your parents/school. Overwhelmed with politeness and depressed by being recognised as needing a seat, fbb remained standing until Copmanthorpe, where empty places became available.

Tomorrow, also from the York holiday, a fantastic feast of Ferro-equinological fun.