The Boggart goes by Bus [2] 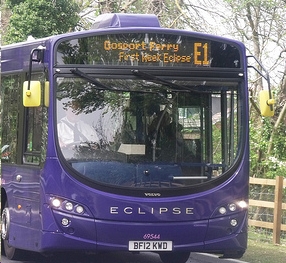 
Yesterday we left First Bus as the sole operator of Manchester route 17, successors to a historic and long-tern operation by Manchester and Rochdale Corporations. In the last few years, competition has arrived in the persons of JPT. 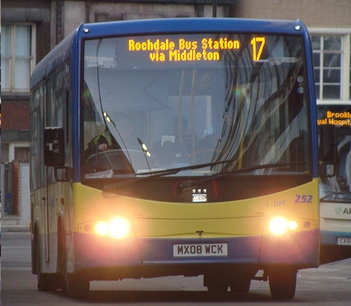 JP Travel, sometimes known as JPT or Jpt Bus Company, is a bus company based at Middleton in Greater Manchester, England. The company is owned by Janet and Peter Walsh and runs local services in the North Manchester area. The JP in JP Travel forms the initials of their first names. The company entered the bus market in 1987. A small network of services began to form during the latter part of the 1980s under the name of "City Nippy".
The company has been one of the innovators in the use of social media, advertising a Facebook page at which customers can communicate with the operator. Buses carry a logo advising passengers to "become a fan of Jpt Bus Company" by joining the Facebook site.

Here, in addition to usual comment and advice, you can solve interesting little puzzles ...
What is odd about this paragraph?

Answer at the end of this blog.
... and even submit jokes:-

Boom, boom!
Publicity comes from Transport for Greater Manchester [TfGM] in the form of a "combined" timetable ... 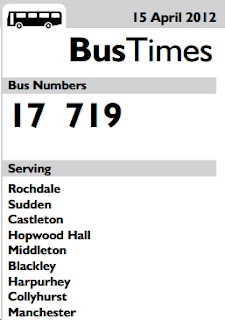 ... merging the services of both companies; actually all three companies because JPT also operates as Eurobus, competing with itself (?). 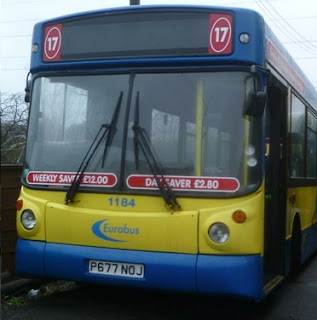 The main table in the TfGM leaflet does not attempt to detail departures, preferring to summarise the Monday to Saturday service as "at frequent intervals". JPT/Eurobus do not run on Sundays.

Oddly there is a second table in the leaflet for JPT/Eurobus only journeys ...

... but for First's unimpeded buses you have to go to their own web site. How did JPT manage to get this isolationist privilege? 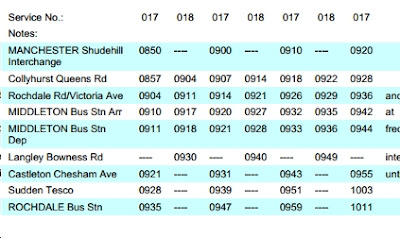 Up to not long ago, competition was very much on price, with JPT offering a day ticket for just £2.80 ... 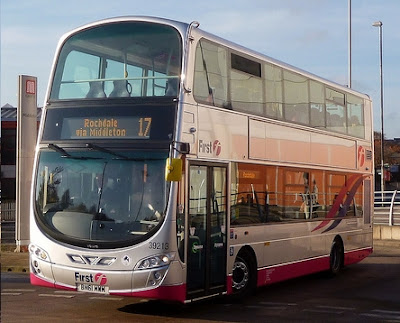 ... in puce and silver. So, at this stage it's First's quality versus JPT's price. But First are forging forward with fantastic features; one of which is, from mid May ...

... a deal which matches JPT's price. 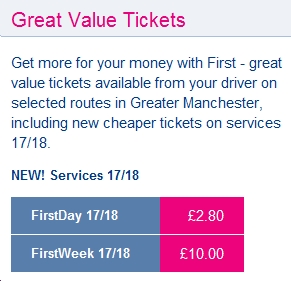 Service 18, incidentally is wholly First's route, providing a five minute frequency between Manchester and Middleton. The 18 then serves the local Langley area. 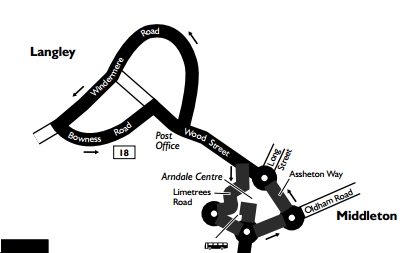 The special offer from First has been received with some cynicism by whoever writes on JPT's facebook page ...

Local and anecdotal rumour [from a Manchester correspondent] suggests that JPT has not always operated in a "professional" manner at bus stops and, since the First price reduction, has countered by giving our tickets for free rides; hardly the best way to sustain their company's viability.

Is this the start of the price war? Which operator will crack first; First or JPT? Can First stand more pain than JPT? The "City" men in grey suits are not at all pleased with First's performance and want to see them make more money. It's a tough one, isn't it.

Until hostilities are replaced with some kind of (illegal) "deal" or retrenchment by the interloper, it's a huge bargain for Rochdale residents whichever company they use. Day return by bus to Manchester, £2.80. Day return by train, £3.90 off peak BUT a whopping £7.20 at Monday to Friday peak times. Journey time by bus 49 minutes; journey time by train 14 to 20 minutes. And First are offering network-wide availability at weekends. It's a tough one, isn't it.

How will it all end? Competition, Collusion or Collapse?
.
Answer to puzzle paragraph : it doesn't contain a letter "e". fbb (biged!) spotted it straight away.
.
And the boggart? 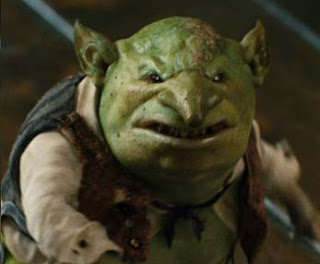 He is a mischievous little sprite who makes life difficult for all those who cross his cheeky little path. He works his malpractice in Boggart Hole Clough Park ... 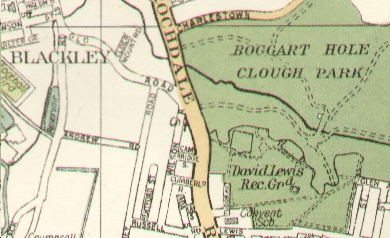 ... just off the main Rochdale Road. He probably travels on service 17 to get to work. Maybe he even has shares in JPT?
.