And now for the big surprise! 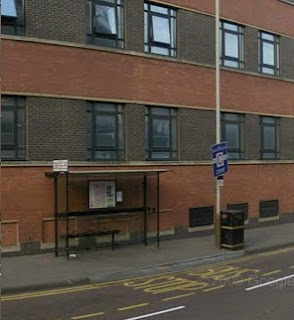 In our somewhat frustrated attempt to catch a bus to Glenfield Hospital, we came to the depressing conclusion that service 14A, via the New Parks Estate was the best on offer. The journey time was half and hour and you would catch the 20 minute frequency First service from the salubrious environs of Abbey Road, at the "tatty" end of Leicester City Centre. Nice!
This information was dutifully gleaned from the City of Leicester map and bus guide ...

... which shows just three routes serving the busy Hospital of which only the 14A makes sense from the centre of the City.
But look closely at the map ... 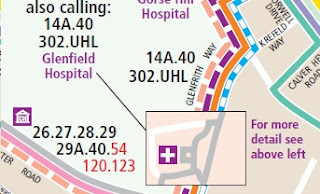 ... and you will espy another 9 (repeat NINE) other routes adjacent to the hospital. It is fair to say that none of these routes enter the hospital grounds but stop on the main Groby Road ... 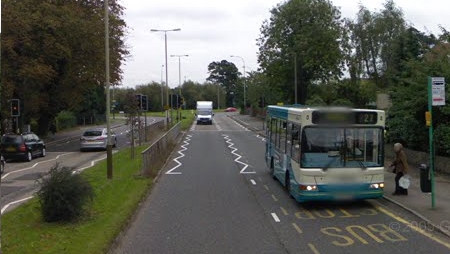 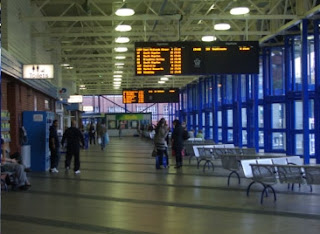 But Leicester City Council doesn't seem to know this, or, if its Councillors and officers do, they don't seem to want to tell you. Might this be because that data is derived from a "confuser system", and the lad who drew up the departure list (extract above) has never been to Leicester in his life? What is equally depressing is that the Hospital itself makes no effort whatsoever to tell you anything useful.
But there's more frustration to be had yet!
If we were to leave the hospital by the South Exit, we might well spy a bus stop opposite on the internal hospital road. 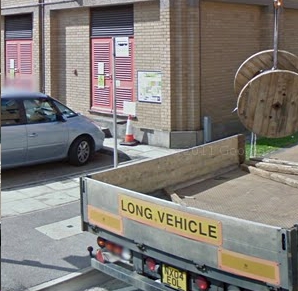 This one of three on the loop road than encircles the main hospital complex. On Google Maps this one is served by the aforementioned 14A (which it may well be; on a convoluted route to escape from the hospital grounds) ...

... for its route via New Parks back into the City. Odd, though, that traveline thinks buses leave from a station? 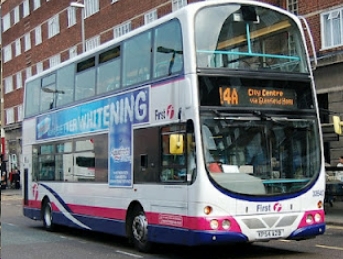 But those west and northern "stations" on the hospital "ring road" remain omnibologically anonymous. Indeed that on the west doesn't even have a pole or a "flag". 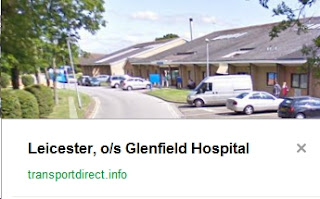 So what ghostly routes stop there, serving ghostly passengers; or perhaps the privileged few who are part of the secret Glenfield Hospital bus users club? Or does the dedicated hospital bus, the UHL Hospital Hopper trundle round this way for the benefit of NHS staff? 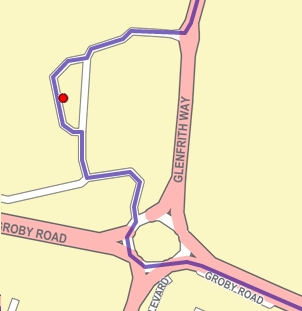 That red dot, on the Traveline route map of the UHL, is definitely at the "Main Entrance"  which is on the eastern side of the complex. And that is the only stop shown on the Hospital's own site plan. 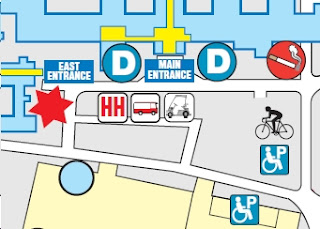 "HH" is, of course, the "Hospital Hopper", helpfully showing the meaningless "UHL" on its blinds; and next to that is a little midi-bus logo and a disabled buggy logo.

Nothing anywhere else. Perhaps buses used to circle the grounds but perform this gyration no more; and hospital managers (of which there are hundreds) don't travel by bus; therefore don't know that unused stops ought to be removed?

No doubt a Leicester bus enthusiast and expert will be able to solve the apparently intractable problem of the Glenfield Ghost buses and its equally ghostly passengers. 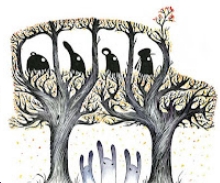 the garden at Glenfield Hospital
And, talking of ghost buses ...
There are several more; as we shall see tomorrow when we "virtually" walk to the Groby Road stop to catch our frequent bus service back to Leicester City Centre.

Meanwhile a hospital hopper, when worked by First, leaves the main entrance; but ... 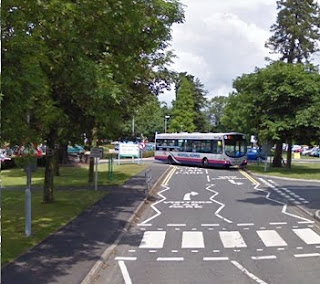