Southampton to York : Then and Now [3]


See also
"Southampton to York : Then and Now [1]" (read again)
and
"Southampton to York : Then and Now [2]" (read again)
Sadly, yet gladly, there is little to say. Cross Country Trains excelled its corporate self. The train was spot on time at every stop making the journey pleasantly uneventful. Five hours on a Voyager isn't fbb's idea of fun, but the journey was as comfortable as a Voyager can be, all the staff were friendly and courteous and, without asking, the fbb party were all given enough milk for their coffee, namely FOUR pottles! Each! 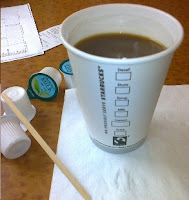 The day started with a lift from chum, Alan, in his posh motor; 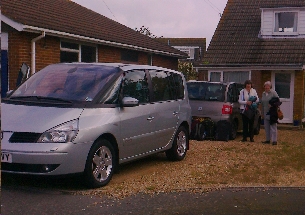 This conveyed the gang to East Cowes for a Solent "cruise" on the Red Funnel car ferry. 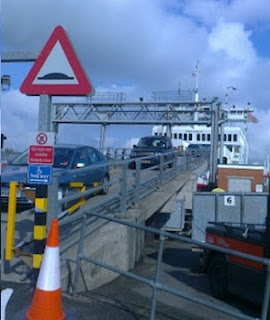 The Red Jet fast service is, well, faster; but you can't buy a delicious breakfast. 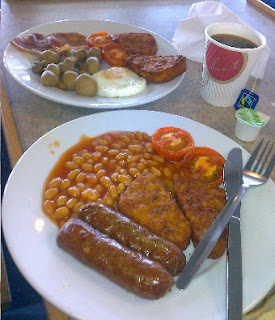 Before catching the free bus from ferry terminal to station, fbb was able to check on public transport information for those who choose to travel forward by bus. 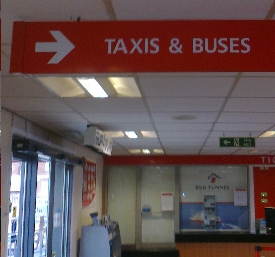 Within the terminal that was it! There was a full timetable of trains from Central Station to London  ...

... but not a dicky bird about First Bus's new network (or even about their old network). Absolutely nothing. Outside, there was a departure list on the stop for the aforementioned free bus; plus a timetable for the Xelabus docks tour in 2011 (!) ... 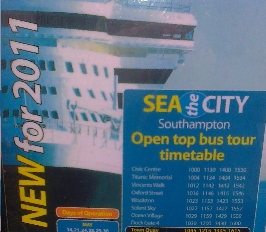 ... which won't be running in 2012; so don't bother waiting for it. For bus spotters all, the vehicle, which was adorned by pictures of the "Titanic" ... 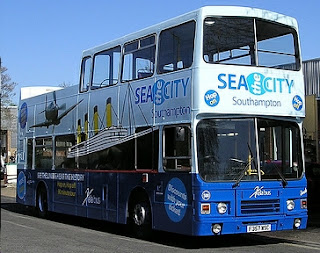 ... is now in more prosaic green and working at Weston-super-Mare for a company using the revived "Crosville" name.
fbb wonders, yet again, whether our bus companies actually want to encourage passengers. A First bus network map, directions to local stops and a rack of their excellent timetables should not be too difficult. GoAhead's Bluestar is also consipcuous by its information absence. 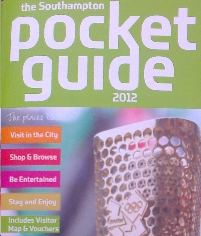 There were plentiful supplies of "The Southampton Guide 2012" which, surprises all round, also contained no public transport information except a helpful (?) note of two web site URLs.
fbb could only find one moan for the whole train journey, however. On arrival at the station, a very nice (Southwest Trains) man advised fbb etc to cross from the south exit via the lift and bridge link to platform 1; a departure location confirmed by the electronic display. No sooner had fbb lugged Mrs, friend Julia, three cases, one back pack, two handbags, a parrot in a cage and a case of Bolinger for the journey (?) over to platform 1, they were ushered back over the bridge to Platform 2B! 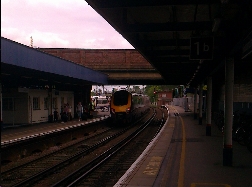 train on 2B rather than 1
fbb suspects that there was no reason, other than the convenience of the operating staff and the consequent inconvenience of numerous elderly passengers hauling huge items of luggage; many of whom had just disembarked from a cruise to the Baltic. Boy was their luggage huge! 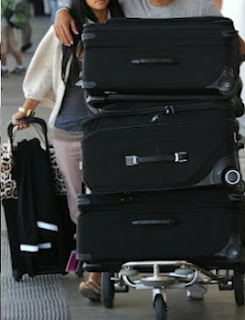 Bad house point, Southampton station.
A big bucket of bonus points, however, for Cross Country Trains for getting it right AND for five hours of train journey from Southampton to York for only ... 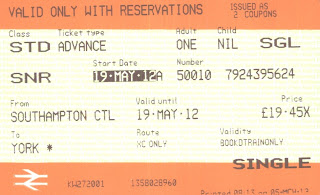 So the fbbs and pals arrive at York, weary but happy after their trouble-free journey and it's a short but creaky walk to the B&B for a good night's sleep; and, as someone once said ...