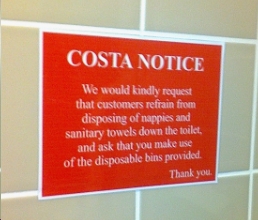 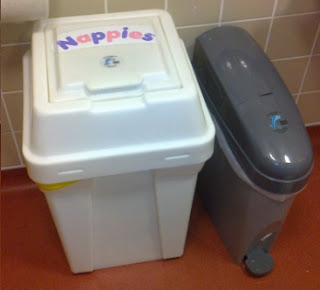 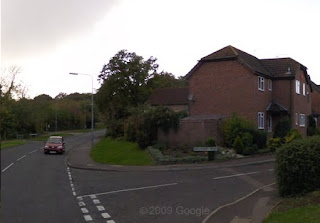 From Hedge End station to Turnpike Way (above), traveline says ... 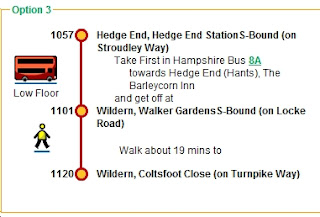 
As an aside, it is good to see that Traveline knows that Hedge End Station is at Hedge End, which it isn't really; and that the stop is on Stroudley Way, just in case an innocent were to wait at the other (non-existent) stops at the station; and for those carrying that essential piece of bus-traveller equipment, a Silva Compass ... 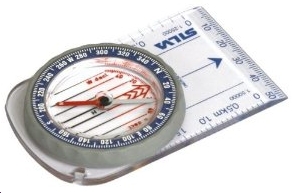 ... the bus will face south when it stops. fbb's recently caught vehicle actually (and naughtily) faced south east as there wasn't enough room to line up with the earth's magnetic field. Disgraceful! Technology overkill, once again.
Locke Road to the Superstores, Traveline says ... 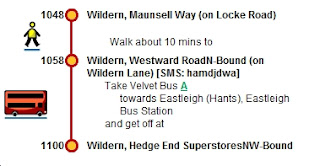 ... 21 minutes and no walking. [bus times are estimated at intermediate stops not shown in the public timetable.] The simple, sometimes longer, one-bus option for this local and circuitous journey is hidden from the electronic world of traveline. The map in First's superb Southampton timetable book illustrates the problem. 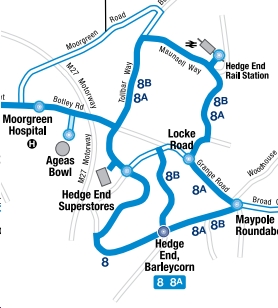 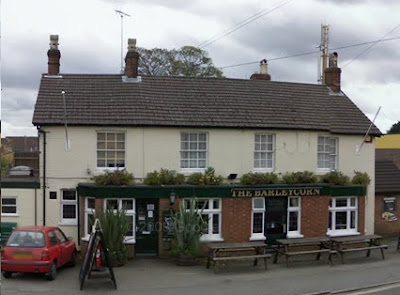 The 8A takes the long way round via the station, Locke Road and Maypole and likewise ends its route at Hedge End. In fact buses run via the whole loop in alternate directions. Ignore the 8B for the moment, which is an evening variant continuing to Botley which, preversely, runs out and back the same way.
The printed timetable creates the same "problem". The 1057 from Hedge End Station is illustrated here on page 75 ... 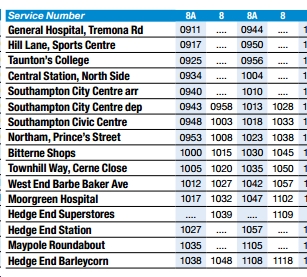 ... at the end of a lengthy cross-city journey from the Hospital; but the continuation round the loop is over the page where the table shows all buses from Hedge End Barleycorn to and beyond the city centre. 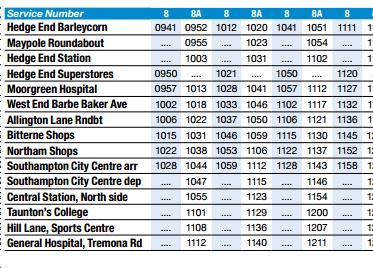 The 1108 arrival at the Barleycorn goes forward at 1111 to the Superstores. In the introduction to their booklet, First eulogises, quite rightly, over the improvements for buses in Hedge End:-
Overall the new Service 8 and 8A serve much more of Hedge End than before giving customers opportunities to travel directly into Southampton throughout the day. In addition, the new services enable local people to link more easily with local destinations, for example the railway station, the village centre, local superstores, Moorgreen Hospital and the Ageas Bowl.  Buses run every 30 minutes in each direction.
[booklet page 7 : fbb's emphasised text]


Having thus eulogised, the timetable pages don't offer a clear indication of these useful "through" links across the arbitrary terminus at the Barleycorn. Because the "official" timetable doesn't, unthinking Traveline doesn't either, hence the anomalies shown above.
fbb has huge sympathy for First (really, truly, honestly!) because it  is very hard to communicate such things to the great British public which, as a corporate body, can't read timetables and expects a bus to "turn up eventually".
But with a bit of thought, perhaps something can be done to encourage local travel and earn a few pennies more. How about a "Hedge End Local" timetable available alongside the full Southampton service; perhaps something like this fbb-created extract ... 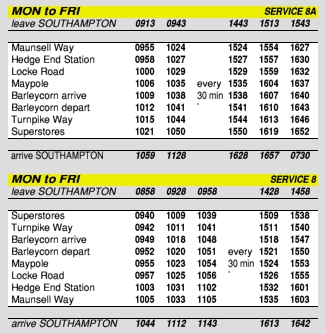 With better headings and a more detailed map, that would do the trick. How about it First?
Many bus companies seem to have given up on short-distance passengers; with high minimum fares and convoluted timetables. Surely there is a modicum of money to be made from local yokels; but you won't make it if you don't tell them the product is available (and the price is reasonable).
Tomorrow, fbb looks in a little more detail at the two recent timetabular productions for First in Hampshire. In summary, an example to all - especially to other less forward-looking factions in First.
** Nit-Picking : some commentators to fbb's blogs have accused him of "nit-picking". Fellow apes are renowned for carefully removing wildlife from each other's body hair to improve their appearance and thus to improve the response from clients of the opposite s*x. 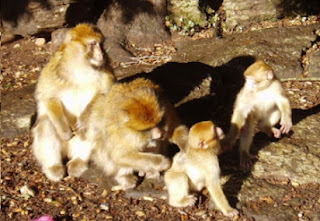 Although the term has now become derogatory, its origins are meaningful and positive. Removing the nits from bus operations is designed to improve their appearance and thus improve the response from clients of all possible s*xes. However critical fbb's blogs might be, they are offered in the hope that public transport can be made more attractive. fbb is proud to pick nits and will continue to do so!
.