And just below the Sunday table:-

Fishy for Fish Street in Redbourn? When fbb first visited the new Gosport and Fareham half-busway, things were not quite right. One anonymous commentator lambasted the corpulent correspondent for expecting everything to be working from day one.
Erm ... the parties have had "n" years to prepare, where "n" is quite a large number. Computer systems can and should be fully tested with finished data but in a cupboard well away from the public. Stops and signs should all be in place. There is nothing particularly new with digital on-bus announcements; see London. Too-small video displays ought to be rectifiable instantly with a bit of re-programing; a passing 7 year old could do it. There is no good reason why everything shouldn't be ready and working from day 1. 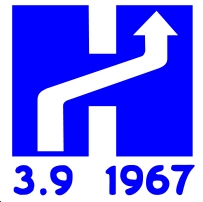 
Sweden changed from left-hand driving to right hand driving (with a reduction of accidents) on one Sunday in 1967. Japanese Railways changed from manual to automatic couplings over the course of one hectic but successful weekend. A new busway should be a doddle!
But fbb promised a return visit and, as predicted by the various shirty anonymi, things were better. Main improvements were that the real time information appeared to be delivering real time, but still only on the busway itself. At Gosport and Fareham bus stations, where real time would be real helpful, of real time there was not a sign. 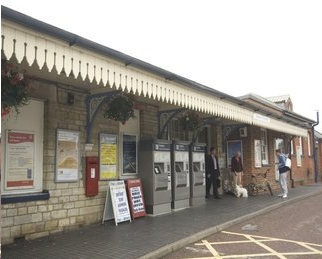 To encourage interchange at Fareham staion, fbb opined that some signing and a bit of "real time" would be useful. fbb suggests ... 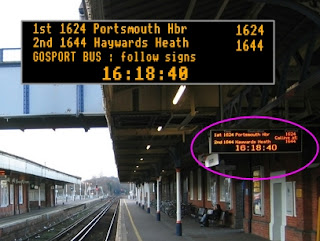 ... on the platform. Then above the subway steps and ramp ... 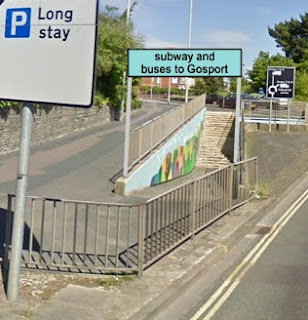 ... and on the shelter facing the station exits. 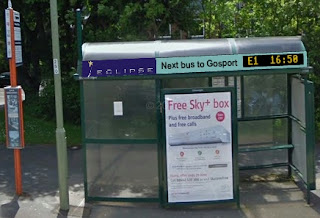 What arrived after fbb's visit (which was on the fifth day of the new service) were ... 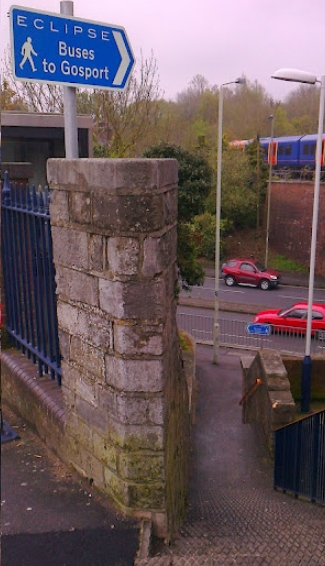 ... signs via a narrow and steep set of steps although a better route would be via the station exit road and less steps. Then nothing until actually within the bowels of the subway. 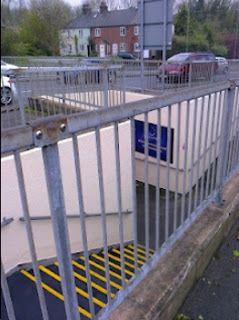 And nothing on the station platforms or in the booking "hall". Whilst it may be "difficult given the current organisation of the railway", it should not be; and any "jobsworth" objections should be routed into the remotest siding for crippled wagons and poked with a very sharp stick. Even if electronic information cannot be provided (it is at York, for buses to Whitby) a simple "to buses for Gosport" hung from the roof is dead easy.
What is now available is obviously better than nothing, but half-hearted. Do we want folk to use this excellent new service or not?
Now before anonymous commentators begin to stick pins into a wax model of fbb (needs a lot of wax!), there is absolutely no doubt that the busway is super, smashing and, apparently successful. An informed source tells fbb that passenger numbers have shown a significant increase (15%?) between the two towns. Excellent.
But at what cost? And is it really faster? 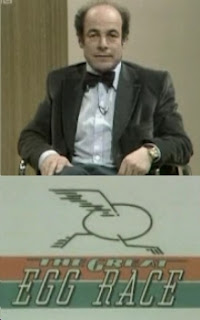 For those who remember this BBC programme, the very first edition (lasting 35 minutes!) is available on BBC archive (here). He is Heinz Wolff of "Zis is a Ferry Elly Gant Solution" catch phrase.


fbb presents "The Great Egg Bus Race":-
On the 1725 service 83 departure from Gosport, not via the busway, fbb's chum, Alan. He's in there somewhere. 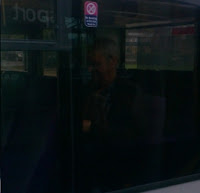 On the 1727 service E2 "Eclipse" departure from Gosport via the busway, fbb. Who would win?
The 83 actually left at 1726, one minute late. Alan reported that traffic was heavy in both directions but flowing freely. His bus had to "wait time" en route and arrived 3 minutes early at 1754. Neither bus was very heavily loaded, despite the "peak" departure times; but most people at Gosport caught the 83, not via the busway, with over half travelling through to Fareham.
Of the six passengers travelling as far as the busway on fbb's vehicle, 3 alighted on the busway, one at Fareham Station and two at Fareham bus station. No one boarded on the busway. Again, the bus had to "wait time". The E2 arrived at 1800, one minute early.
E2 via busway : actual running time 33 minutes
83 not via busway : actual running time 28 minutes

Next Blog : Thursday 17th May
Posted by fatbusbloke at 01:25