"An epithet is decorative insofar as it is neither essential to the immediate context nor modelled especially for it."
So it's a posh word for interesting extra bits!
"Grimey" is Grimethorpe [1 of a series] (read again)
Grimethorpe Colliery Band is now sponsored by RJB Mining. The Band was formed in 1917, as a leisure activity for the workmen at the colliery. It was initially financed by the colliery, a sister company, and a welfare fund set up by the miners themselves. The musicians, most of whom worked at the colliery full-time, perfected their skills through competition. From 1932 to 1945 the band entered 42 such competitions, winning 19 and never coming lower than fifth! It was in 1972, under their new conductor that national and international fame developed. 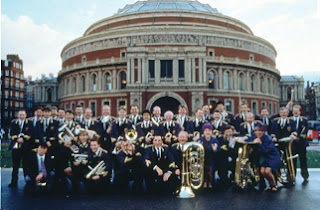 Sadly, at the last count, only one of the bandsmen lived in Grimethorpe.
Here, however, a snap showing the filming of "Brassed Off" in the village itself. 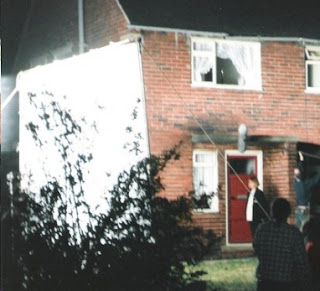 The film was almost a biography of Grimethorpe, describing the battle to save the Band as the Colliery fell into decline.


DVR at Grimethorpe [2 of a series] : (read again)
The interwebnet produces some delightful gems; and this is one of them. 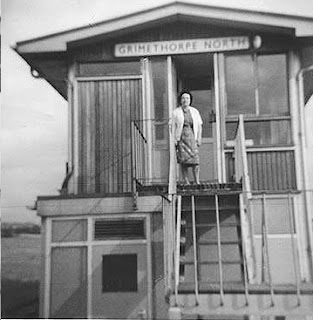 Gertrude Richardson was signalman at Grimethorpe North until the box closed in 1966. The details of her railway career are told on a splendid little site (here). fbb is hopeful that a blog reader might be able to tell him exactly where the box was located.
Barnsley to Grimethorpe [3 of a series] (read again)

The once famous Upper Sheffield Road depot, originally for Barnsley's trams, then for Traccy's buses and finally for Stageocach, is no more. It has been demolished and new housing is appearing where once beautiful buses were brushed and brightened-up before beginning their busy day's service. 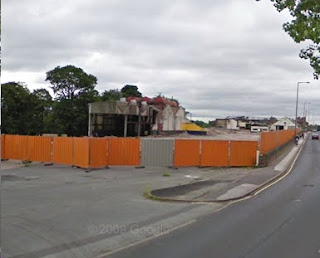 When the Google Streetview noddy car trundled past, only the fuel tanks were left standing.

fbb wrote "railways in the Barnsley area are complicated". This 1940s map shows something of the spaghetti of lines to the east of Barnsley stations. 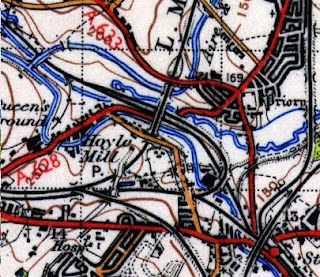 The A628 Pontefract Road, and the route to Grimesthorpe, runs from lower left to top right. Hoyle Mill (map centre) was the base of the "Ideal" bus company which, at one time, operated between Barnsley and Pontefract, running service 46, now similar Stagecoach 246. More pictures of "Ideal" buses (here) 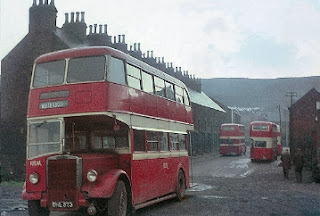 The Oaks Viaduct (map centre) was particularly spectacular and carried trains to Cudworth. It was demolished in the 1960s 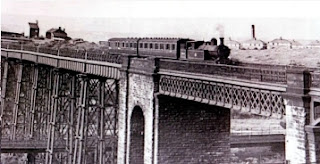 Traccy to Grimesthorpe [4 of a series] (read again)
In a comment to this blog, Ken Traveline-Dorset confirmed the details of the West Riding services from Grimethorpe to Wakefield and suggested that fbb might add a timetable. So, specially for Ken, here is an extract:- 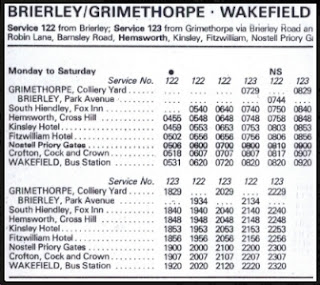 Also "on line", fbb spotted this picture of this splendidly preserved 1913 Barnsley District Electric Traction Company bus. Note that it is going to Grimethorpe. 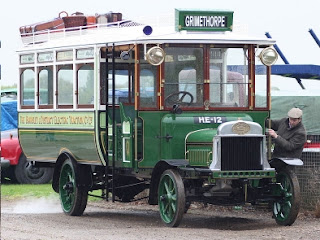 Was this the earliest bus route to the village? The Company eventually became Yorkshire Traction.
Stagecoach to Grimethorpe [5 of a series] (read again)
fbb is indepted to members of the South Yorkshire Transport forum for kindly supplying both the picture of the Atlantean going to "White City" in the original blog and a couple of shots of privatised Yorkshire Traction vehicles. This bus is also going to "White City" at Grimethorpe ... 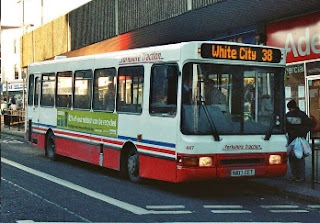 ... on the route now operated by Red Line.

A correction: fbb had assumed that Red Line's 37 and 38, introduced in response to Stagecoach's withdrawal from these routes, were "tendered" by SYPTE. Apparently they are fully commercial with no supporting PTE cash. Unlike most local authorities, SYPTE does not inform passengers which journeys are financially supported. In his defence, old chubby-chops states that they do look like tendered routes.

"Hi I'm Sean, I started the company in Barnsley, 2008 with 2 buses when I took on 37 service after Stagecoach withdrew it." From the Red Line web site (here).

According to an "anonymous" comment on yesterday's blog, all of Red Line's services are commercial. Thanks, anonymous aka P Dantik!

Of course the "Grimey" White City is not to be confused with a more celebrated namesake in London. Once home of the "Flip-Flap" at the Franco-British Exhibition in 1908 ... ... and now sporting its somewhat more modern Underground Station on the Central Line, and the BBC Television Centre. 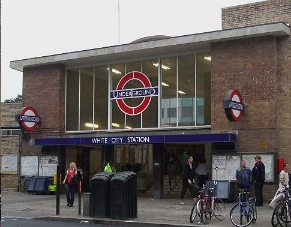 Thought? Perhaps the White City estate at Grimethorpe was named after the Exhibition, famed for its bright pristine white exhibition halls? Might brighten the day for a grimy Grimey miner? 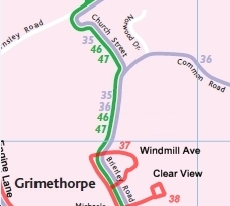 Brierley is "Church Street" at the top of the map, about half a mile away from the Windmill Avenue terminus.

Next Blog : due Sunday February 12th