fbb's Dabble with the Big Apple [1]

fbb has never been to New York (although all three sons have) but this blog-reader interest prompted the old codger to have an on-line look at public transport in that spectacular and challenging City. 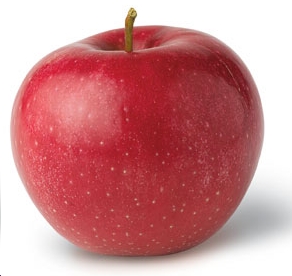 The earliest citation for "big apple" is the 1909 book The Wayfarer in New York, by Edward Martin, writing: "Kansas is apt to see in New York a greedy city. It inclines to think that the big apple gets a disproportionate share of the national sap"

By the late 1920s, New York writers other than Fitz Gerald were starting to use "Big Apple" and were using it outside of a horse-racing context. "The Big Apple" was a popular song and dance in the 1930s.

By the 1960s, "the Big Apple" was known only as an old name for New York. In the early 1970s, however, the New York Convention and Visitors Bureau, under the leadership of its president, Charles Gillett, began promoting "the Big Apple" for the city. It has remained popular since then.

In 1976 the apple was chosen as the "official" fruit of New York State.

Public Transport is in the hands of the ...

... which looks after buses and "subway" (Underground). For those who are as "higgorant" as fbb, pleas note that the "El" (for elevated) ... 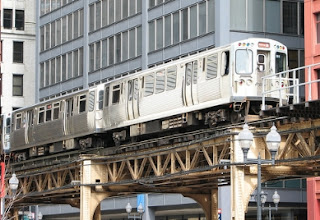 ... is in Chicago, not Noo Yoik. Confusingly, bits of that system are underground, but still called the "El"! New York once had an "El" but no longer; view a video clip (here).

Again, for the insular Brits, like fbb, who have never jetted over the Atlantic, New York consists of a series of islands and peninsulas. The most populous island is Manhattan with the Hudson River to the west and the East River somewhere else. Most of what naïve observers think of as "New York" is on Manhattan Island, which is, to use a couple of technical terms, "big" and "full"; Yet the Island is only 7.6% of the total land area of New York City! 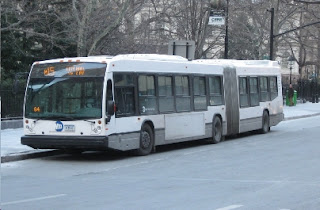 ... and a spectacular bus map of which fbb can only show a little bit from the southern tip of the Island. 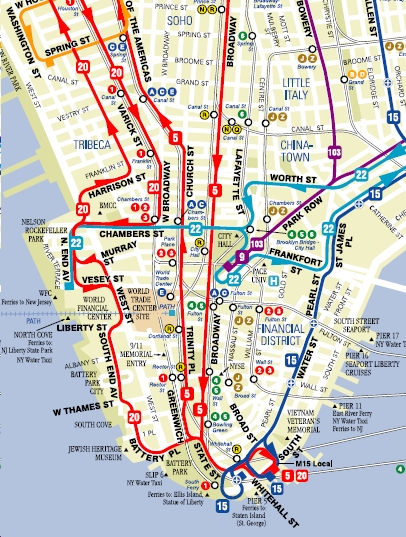 The full Manhattan Island bus map can be viewed (here). 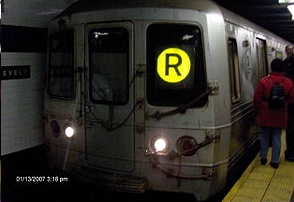 The  subway network is equally vast with an extract from the somewhat confusing map shown below. 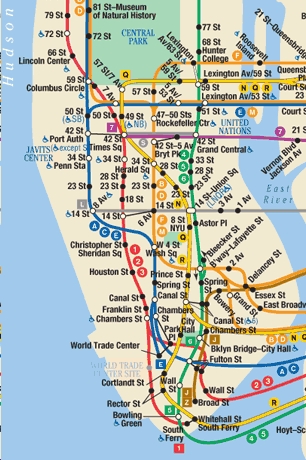 Again the full map can be viewed (here). Even a more diagrammatic version looks complicated! 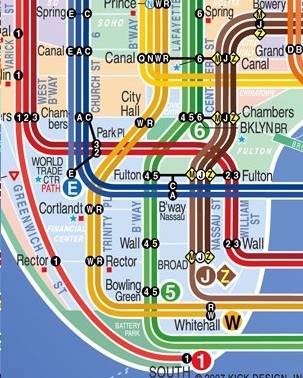 Perhaps things become a little clearer if you understand that the colour indicates a group of routes (e.g. all "yellows" run on one set of rails via Broadway) and the letters (N, Q, R, W) show the pattern of service spreading out from the common section. Imagine trains on the District Line in London showing E for Ealng, R for Richmond and W for Wimbledon and you get the idea.

... and on the far side, in the borough of Queens (there's a clue in the name of the bridge), the trains exit the tracks below the top deck roadway and breathe fresh air for a brief while. 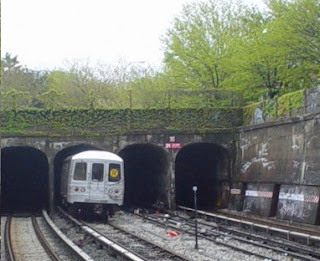 An aerial view below (via Google Maps, of course) places the picture above at the left hand and of the visible tracks. 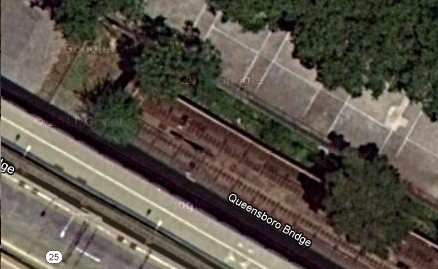 it's amazing what you can discover on-line; assuming that fbb's surfing activities have produced a correct result.

So, having researched the network and consulted the maps, the next stage of fbb's virtual visit is to plan a journey, New York-style. A report on that exciting (!) challenge will be published tomorrow.

See ya, buddy!
Next Blog : due Saturday February 18th
Posted by fatbusbloke at 05:20