Herbert K Weiss, that well known County anagramatist, has just moved in to a posh house at West Ilsley and he needs to get to London. Eschewing his expensive "people carrier", he decides to "go green" and use public transport. A neighbour has told him to catch a No. 6A bus from outside the church ... 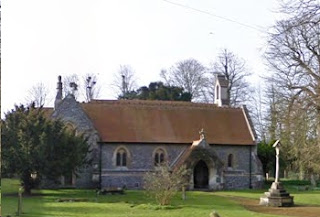 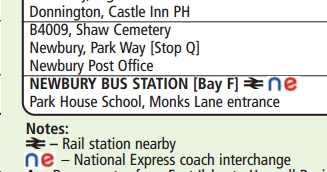 ... the station is close by. All he has to do is to find it! A local yokel thinks you turn right oustide the bus station (walking eastwards) then right again at the end of Market Street and follow the signs. Herbert sets off apace, but because his bus has arrived in Newbury a minute or two later than scheduled, he misses his train. Oh, "pish and tush" intones Herbert. 18 minutes to wait for the next train, change at Reading and arrive in London 37 minutes late.
"Pish and tush", indeed. If only the station were a bit closer, Herbert might have made it.
But it is closer. fbb, always ready to lend a helping hand, will guide you step-by-step all thew way.
Step 1 : Leave the bus station and turn west along Market Street, to just past the car park. 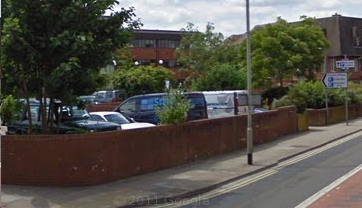 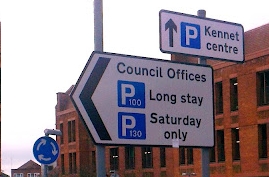 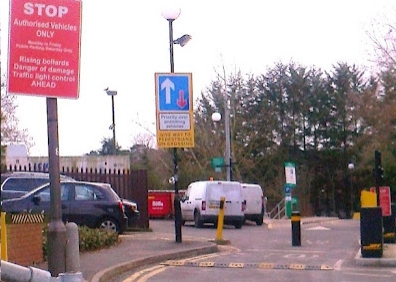 Step 4 : go down the clearly labelled steps, avoiding being impaled on the rising bollards! 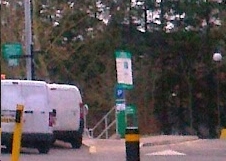 Step 5 : there is the station entrance to your left across the car park.
Coming from the station to the bus station is a little easier, but not if you manage to find the "official" poster. 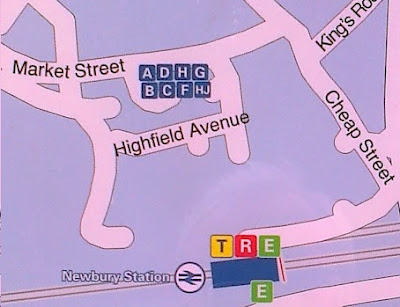 Mind you, fbb could only find one copy on the wall outside the entrance. The map is accompanied by a full list of destinations served including, helpfully, the departure bay letters A to J. No timetables, so the poster is almost useless. The map sends an intrepid intergrated interchanger the "long way round"; a route as taken in the reverse direction by the hapless Herbert.
But, what is this fbb espies up a pole?

Thanks for the little picture of a bus to inspire confidence. This directs the brave diagonally heavenwards and in the opposite direction to that shown on the map. Soon appears a further sign ... 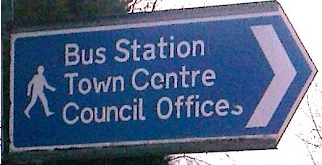 ... which points enigmatically to the grassy bank at the back of the car park, for a scramble to and through someone's garden (?). 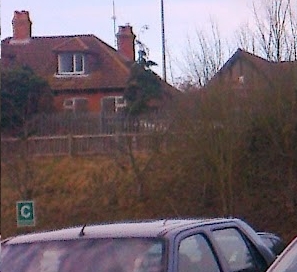 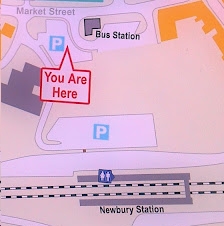 The town centre plan is small (A3 size) and this particular one is on a pole in the corner of the car park, facing away from the street. fbb provides just an extract of the relevant bit. It would be a real challenge for Herbert to find it. It is the only tangible evidence of the quickest route to the station. As an aside for motorists, it implies, wrongly, that is it an "authorised" vehicle route to the station parking area.
If you try in the car, the rising bollards will get you!
fbb is available for a lecture tour of West Berkshire or on-site guidance for people like Herbert K Weiss. fbb's fees are astronomical but ultimate success in trekking between Newbury bus station and the railway is guaranteed 100%.

Next Blog : due Wednesday February 29th
Posted by fatbusbloke at 07:13