The search for service 27A. (but interrupted?)

1 letter received  'cos fbb forgot a code
the usual battle with debit card "security":-
thus typing in about 130 different codes and characters
in assorted boxes and using about 20 mins of fbb's time
-o-o-o-o-
It makes battling with bus information quite pleasurable. BUT, is it really more efficient and less costly than sending out a copy of the form by post for the Company Secretary to sign and post back? Technology for the sake of it, again.
--------------------------------------------------------------------------
Back to the business in hand. But, before we unravel service 27A, let's compare the output of the three providers of timetables for service 27 (from Bawtry to Mattersey and on to Retford). See "Bus Rides Bought from Bawtry [1]" (read again).
The Stagecoach timetable is, like most of their leaflet infromation, very basic; in this case needing three explanatory notes to give the complete picture. 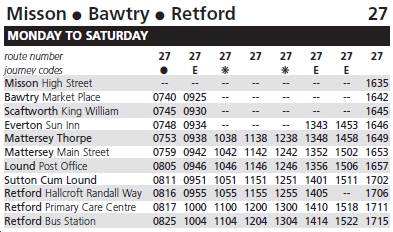 Nottinghamshire's version, only available on-line, is a little better, partly because it offers separate Monday to Friday and Saturday panels; yet a littler worse because the timetable is not correct, probably simply out-of-date. 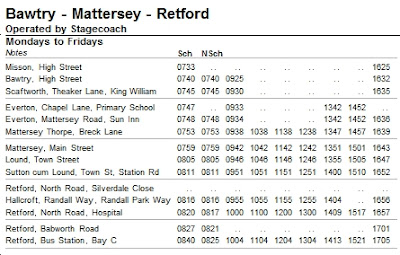 But the prize for the most helpful set of times must go to Travel South Yorkshire. Yes, dear blog reader, you are not dreaming; you have not dropped into a parallel universe; neither has fbb finally gone completely doolally. So let's hear it again.

The prize for the most helpful set of times must go to Travel South Yorkshire. Unlike Stagecoach it clearly shows times for Everton Village centre; that's High Street ... 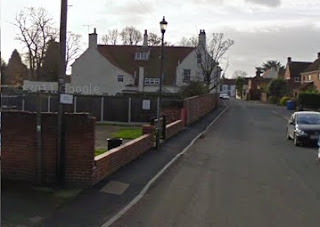 ... according to TSY (and that is a bus stop "flag" on the telegraph pole!), or Chapel Lane Primary School according to Nottinghamshire. No pole and no flag this time. 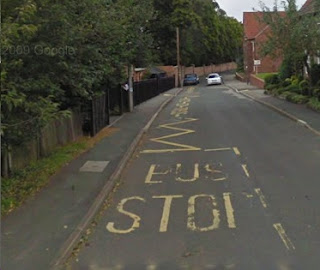 And, no, they are not different names for the same place, they are different stops, as shown by the little blue symbols to the left and right of this aerial view. 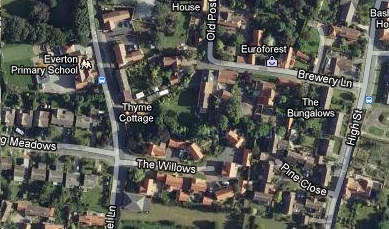 Why? No idea! TSY also explains the schoolday diversion correctly, whereas Nottinghamshire doesn't. NCC's school times are different and almost certainly wrong, anyway. Stagecoach only reveals the truth in its black blob note. Poor marks, Stagecoach, because If you don't read the note ...

...  you might well arrive in Retford 15 minutes late and miss an onward connection. Neither presentation method is much help, however, if you don't know whether it's a schoolday or not.
And that "star" note is our first clue as to the Service 27A from Bawtry to Mattersey.  But, hold fast ye bus-lubbers. fbb chose his words carefully when he said (twice) that the TSY timetable was he most helpful set of times.
But look at the list of places ... 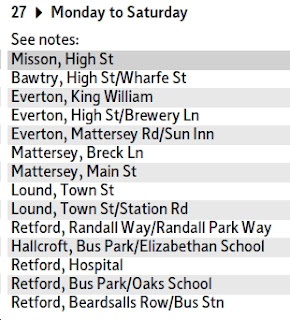 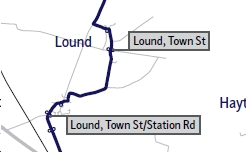 
Hey, that's three locations totally wrong on one timetable; a bit of a TSY record, is it not? Well done!
Never mind, all three are in Nottinghamshire and that is foreign territory "where be dragons".

extract from the famous hand drawn William deScarlette
map of Nottinghamshire, first published in 1197.
Courtesy of The P. Ottie Museum, Retford
But tomorrow (promises, promises) we MUST track down the 27A.


Next Blog : due Wednesday February 22nd
Posted by fatbusbloke at 03:32