that we have the highest fares in Europe.


At the conclusion of yesterday's blog, warning of the inherent danger of "statistics", fbb promised s further look at this rather boring annual headline. Every January we read of "Commuter Fares Shock" as if it were a surprise, despite the infromation's having been published way back in the previous autumn. 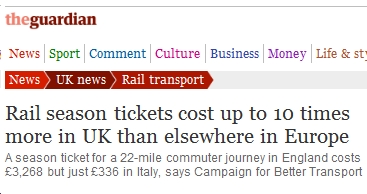 But do UK rail journeys cost more than those in Europe?


It is quite possible, by choosing the right set of figures, to convince a typical London-orientated newspaper reader that all is doom and gloom on the fares front. But, by choosing another batch of prices, the tables can be turned and UK can offer cheaper fares that (almost) anywhere in Europe. Book-ahead fares and special offers can be farcically cheap as fbb has previously blogged. 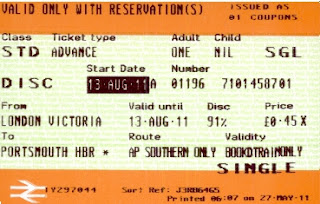 London to Portmouth Harbour for 45p. Beat that in Paris or Rome! See "Ho Ho Loco : Oh No!" (read again)

And the doom-mongers tend to forget that most of our johnny-foreigner chums across the channel pay higher taxes (direct and indirect) to support these cheap fares. At one stage (fbb does not have recent figures) fares on the Paris Metro covered only 25% of the costs; the rest came from various taxes and levies.
The Evening Standard was similarly appalled by the non-shock shock; which was actually LESS than originally announced; so a more pleasant shock than the original non-shock shock. Shocking! 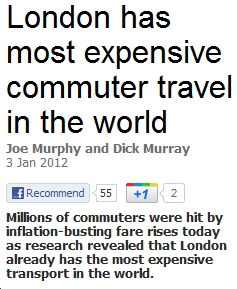 Not only are the fares impossibly expensive, according to the "Standard", but the railway companies are even allowing trees to fall on the line to make matters worse.


"And with high winds bringing disruption to some lines, including a tree on a line at Bellingham in south-east London, some were late for work despite paying an average of almost six per cent more for the privilege."

Comments added to the Guardian's on-line article were mainly equally vituperative; blaming "fat cat bosses", the rail unions, the government, Margaret Thatcher, Tony Blair, Colonel Gadafi etc. etc. Here is a sample:-
But our trains are 10 times slower, so it all evens out in the end.
Simply wrong.

If car users had to pay for the cost of the road system in the same way that rail users did, cars would cost more than houses.
How true : car travel is, and always will be, much more heavily subsidised than rail. Perhaps not as expensive as a house, but ... 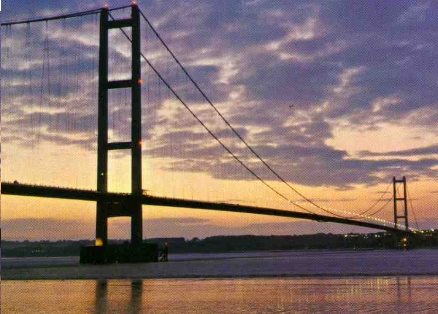 Humber Bridge : money well spent?
I'm fed up with post-privatised industries using customers money to deliver "improvements to services". When the improvements are not delivered, the customers don't get their money back and the "regulators" are supine. They bark very loudly but do not seem to have the teeth to do anything.
There is a bit of truth here; not much, but a bit. 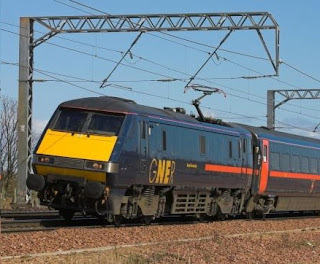 every half hour to York : money well spent?

I may be a taxpayer, but I'm not a rail user. Why should I pay for someone else to travel cheap?
Now that is a very important question. Why should he? 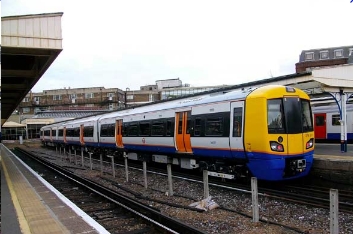 Overground : money well spent?
The alternative model is to remove all market forces from the trains altogether and stop using price to regulate usage. This would require re-nationalisation and some sort of quota system to ensure we all don't try to get on the 1920 to Manchester at the same time.
But, kind sir, wasn't nationalisation was a disaster for the railways? Mega incompetence and high destructive price rises. How easily we forget. Now if we could have nationalisation but ring fenced against repeated changes of government whim policy?
One or two comment writers broached the key questions which are ...
Which do we want; substantially higher subsidies and thus cheaper fares (as in most of Europe) or lower taxes and thus lower subsidies? We cannot have both.
Do we really want to hand the railways back to full government control? Or perhaps entirely in private control? Would we really like similar instability to that of the bus industry?
Why should any railway company reduce fares when passenger numbers are increasing every year? Their job (and GB's public has voted in successive governments who have stuck to this) is to make money for their shareholders, NOT to be nice to commuters. If we don't like it, don't vote for them next time!

Power to the People?

Now if a government were to introduce a stable National Transport Policy with structures that were difficult to change, at least for 25 years or so, some of these impossibly fraught questions might be resolved. Would a party offering something imaginative, stable and affordable win enough votes to carry the policy through?
Or is such a project just a political and departmental "Bed of Nails"? 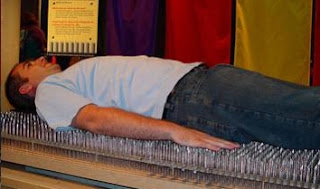 Next Blog : due Saturday February 25th
Posted by fatbusbloke at 01:32