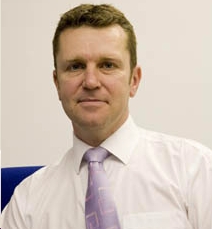 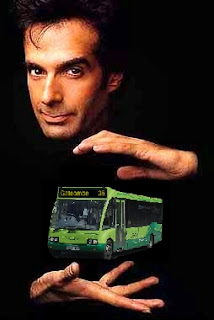 With rumours flying around the ether about buses to Gatcombe, near Newport, Isle of Wight; a possible vanishing act by David Copperfield, grand illusionist, and some shirty comments by "anonymous" appended to fbb's previous blog (read again), more research was obviously needed. Most of fbb's previous conclusions were based entirely on publicity currently available, on-line and in print; so anonymous' somewhat pained reaction might suggest that he (or she?) had the benefit of insider dealings.
Fact 1  : until Friday 2nd September, Gatcombe Church was served by route 36 operated by Wightbus. 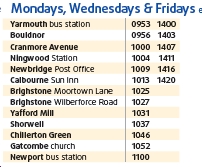 with no mention of the journeys via Chillerton and Brighstone in the index, so tricky to find the information, eh?
Fact 4 : According to Southern Vectis' new timetable from 5th September, route 35 no longer serves Gatcombe Church.

Fact 5 : Despite this omission, it appears that route 35 does serve Gatcombe Church, at least according to Traveline's map. 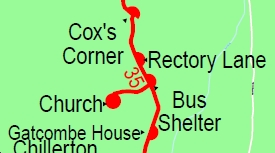 fbb, foolishly had not spotted this. Additionally his usually reliable source was adamant that the 35 did NOT run via Gatcombe Church now that the NEW 36 was operating. 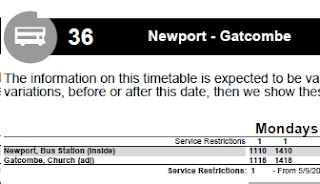 Indeed an "informed source" from the Isle of Wight Council, when pressed,  seemed unsure which way the 35 would actually run. BUT .... fanfare of trumpets ... sound of fbb tucking into humble pie ... chortles from anonymous as he shouts "told you so" ... an even more reliable source from Southern Vectis confirms that both the 35 and the new 36 serve Gatcombe Church, giving that pretty ecclesiastical edifice (there's not much else) three trips to Newport on Mondays, Wednesday and Fridays at ...
0918, 1050 and 1118
... and three journeys back home at ...
1110, 1250 and 1410
A fantastic service giving the particular privileged passenger a huge choice, better than ever before.  An fbb map explains all ... 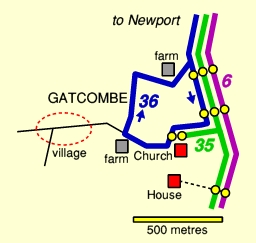 ... or does it? The official registration for the 35 is shown in green. It implies that the 35 bus does a "double run" from the main road, turning at the Church (which is here, in the trees on the right on a dangerous bend with poor visibility). 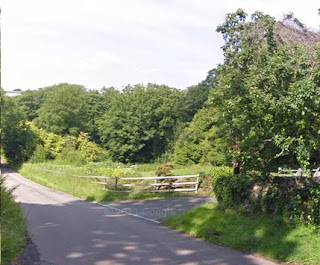 As fbb's alter ego, Victor Meldrew, might have said ... 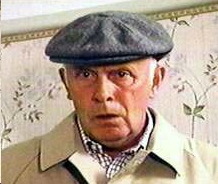 "I don't belieeeve it!"
And the question which, in a way, started all this, still remains. Why run the 36 AND the 35 for minimalist passenger numbers at one solitary stop, roughly a quarter of a mile from the hourly service 6 on the main road and not particularly near the main settlements in Gatcombe? There is certainly a faint odour of ratus ratus in the Island air.
Gatcombegate, the Final Word - OR IS IT?
Not quite, there's another question. Why is the 36 still a secret in all printed and SV on-line publicity? Perhaps illusionist Copperfield may yet be preparing one of his celebrated vanishing acts?
And another question. How is Joe Public ever going to work this lot out?
And, by the way, another of fbb's chums reports that, so far (on Thursday, the fourth day of the scheme), he has seen NO "community partnership" drivers on any service 6 journeys, they have all been dressed in smart Southern Vectis uniforms. The "partnership" was, if you remember, for half the 10 trips a day to be run by the community. News is also breaking that the Unions are expressing deep concern about the use of "volunteer" drivers, so possible "trouble at 't mill" may be looming in the not too distant horizon?
Who said something about "Tears before Bedtime"?

Stop Press In order to sort out what is clearly a mess, fbb went back to the public domain information, namely the service registrations deposited with the Traffic Commissioners. This reveals that the 36, part of the 6 documentation, was registered on 21st July whilst the 35 is dated 9th August.

Either a change of heart at the last minute ... 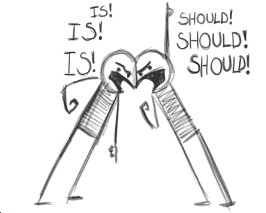 ... by the ever efficient Isle of Wight Council (pause for hysterical laughter) which foots the bill, OR, an act of mis-management (there are cruder phrases available) by the bus company. "Sorry, guv, we forgot!" But NONE of this is any excuse for the outrageous omnibological obfuscation on-line, and in print, all totally disgraceful. (see comments on the previous blog)

Readers may draw whatever conclusion they wish from:-

Fact 6 : The NEW service 36 is to be withdrawn after service on Friday 21st October, just 7 weeks after its secretive un-launch.

Next blog : Saturday September 10th
Posted by fatbusbloke at 04:25