Blogs based (loosely) on a business trip:
Thursday 15th September 2011
fbb was, regular blog readers will remember, on a somewhat unusual route to Watford for a business meeting. He chose to travel via Clapham Junction, Shepherds Bush, White City, Wood Lane, Baker Street and Watford stations, where his contact would meet him with a chauffeur driven limo; actually the office van! 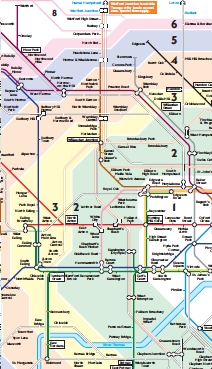 Of course, you cannot read the extract above, so the full zone map is available (here).
So, to allow a journey planner to do its stuff, fbb tried Woking to Watford on the Transport for London [TfL] site. We are told repeatedly in the media that this is one of the most used journey planners in the galaxy and a huge percentage of its users are "satisfied" with its performance.
So here goes ... 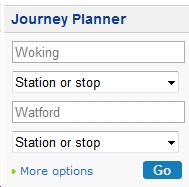 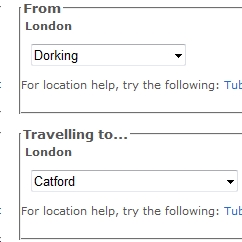 After a time consuming, (and quite unnecessary, the names entered are correct and spelled correctly) trawl through TfL's lists we can try again. 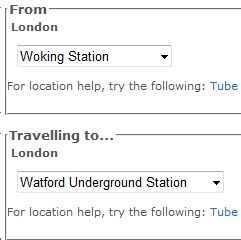 It is unfortunate for the electrons that the only station called simply "Watford" is the least convenient for the location called "Watford" but everyone except TfL knows it as "Watford Met". One day, we are promised through trains from the Metropolitan Line to Watford High Street and Junction; at which point Watford "Met" will disappear in a puff of blue smoke. But, nevertheless, the station is still called "Watford" ... 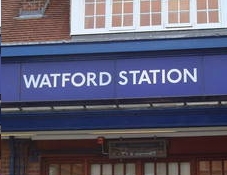 ... and that is what fbb correctly searched for, unsuccessfully.
So here's an answer; from Woking to Shepperton by bus, then:- 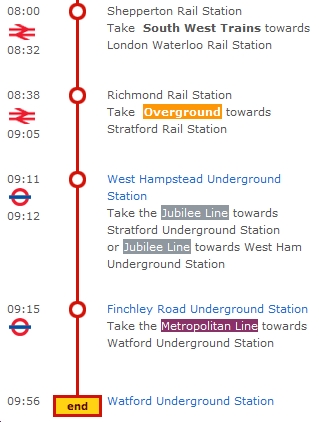 But, wouldn't it be better to go by train from Woking? Of course, but Woking is not in the TfL area, so we cannot be told about it. Some TfL buses go there, so you can discover them, but big South West Trains services are not under the fearsome control of  Boris the Blue, so he won't tell you about them.
Surely the TfL journey planner should, at least, include all national rail?
Watford Station also befuddles Traveline. It wants to offer you everything within a few miles of Watford with "station" somewhere in its title. 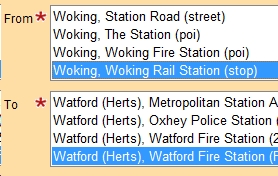 But once this is corrected (again an unnecessary task as the original input was correct), answers come thick and fast. 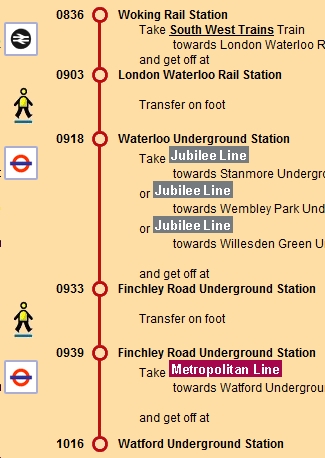 This one is OK, although there is a mammoth "travolator" trek to the Jubilee Underground platforms at Waterloo ... 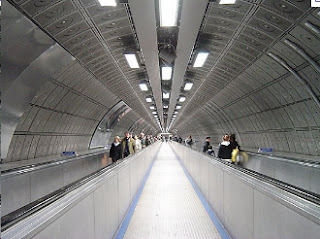 ... Waterloo to Baker Street is easier in some ways. But Traveline seems determined to take you via Waterloo. Trying an enquiry from Clapham Junction ... 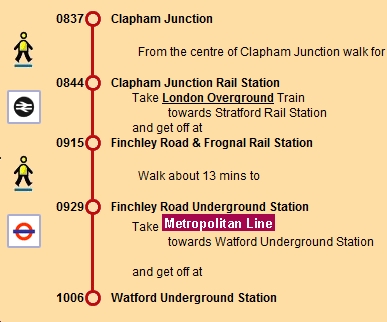 ... Traveline grudgingly offers the above "roundabout" route. It also seems to think that there is a "centre" to Clapham Junction which is, of course, located at Battersea. No, fbb does not fully understand; presumably (some?) folk now refer to the area round the station as a town in its own right.
Understandably, then, fbb's chosen route is outside the remit of a Journey Planner. So it's back to printed timetables. To achieve his desired route fbb might need:-
South West Trains leaflets for services to Clapham Junction
Overground leaflet for services via Shepherds Bush
Southern Trains leaflet for services via Shepherds Bush
OR the handy 3263 page GB Rail Timetable at £16
Underground times for Central line (not published)
Underground times for H&C line (not published)
Leaflet for Metropolitan trains to Watford
BUT, it's all available on-line, of course. Absolutely; too true.
Just you try it; but allow a good hour or so. And before you tell the chubby one that underground trains are so frequent that you don't need a timetable, do bear in mind that there are connections to be made so some easily accessible source of "running time" might help.

That's called a "timetable", TfL.
As usual, it's easy when you know but fiendishly difficult if you don't. And there's an awful lot of people out there who fear travel because they don't.
Tomorrow we actually arrive at Watford, by the desired "S" (for Sausage?) train, and ON TIME!
P.S. The directors of the Metropolitan Railway intended to run their line to Watford Town Centre. The land was "set aside" and a terminus station was partially built. But the money ran out and it never got there! The proposed station building is now the "Moon Under Water" pub, with a nice cast panel on the roof line to display the station name. 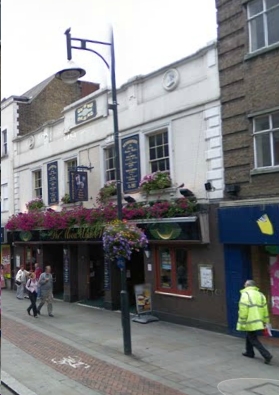 Next blog : Friday September 23rd
Posted by fatbusbloke at 02:25