Blogs based (loosely) on a business trip:
Thursday 15th September 2011 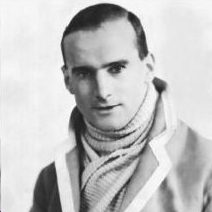 Robert Cedric Sherriff wrote the play of the same name, first staged in the West End in 1928. The setting was the First World War and it "starred" a youthful Richard Caldicot in a relatively minor role.

Caldicot (above, centre) later found lasting fame as Captain Povey in radio's "The Navy Lark". "Left hand down a bit it is, sir."**
fbb well remembers reading "Journey's End" at school. But today's blog gets us at last (hooray, we hear you cry!) to Watford, known as Watford Met, terminus of a branch of the Metropolitan Line. But all was not well on the Underground on Thursday 15th September. Approaching Baker Street on his Hammersmith & City Line train to Plaistow (Pronounced "Plast", as in "blast", plus "oh"), fbb listened to the driver busily countermanding recorded station announcements.
"Due to a Passenger incident [usually means a suicide - fbb] at Mile End, this train will terminate at Moorgate."
The station announcer, presumably a real live "person", at Baker Street confirmed this analysis, warning that there were no trains beyond Aldgate and advising prospective eastbound passengers to ...
"Seek an alternative route"
This would most likely have been the Jubilee Line to West Ham and beyond but the next announcement was ...
"Due to a signalling fault, there is no service at all on the Jubilee Line"
So the Jubilee's super-duper new high-tech signalling system had gone the inevitable way of all technology. It was busted. Fortunately all looked well with fbb's service to Watford and, joy of joys, it was an "S" class train (that's "S" for "Sausage"?) 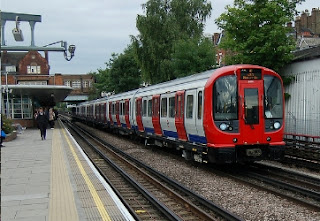 The other good news is that TfL, amazingly and exceptionally, publishes real timetables for this line, so fbb was on the advertised 1314 departure from Baker Street. 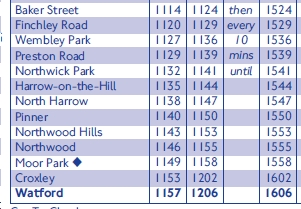 Mind you, it's a good thing he didn't want trains to Uxbridge, because, according to the web site, they didn't exist!

But to compensate, you could go to Amersham TWICE. Once again the question is posed, "does anyone in TfL HQ actually USE this site?" But, safely seated on his Sausage train, fbb heard another announcement:-

"For the benefit of passengers for the Jubilee line ALL Metropolitan Line trains will be stopping at Willesden Green."

So the busted Jubilee was now, presumably, shuttling between Willesden Green and Stanmore (see map). fbb silently applauded the thoughtfulness of London Undergound in offering this alternative.

His appreciation was somewhat dented as his train sped non-stop through Willesden Green! As an indication of how well people listen to announcements, there were no passengers clawing at the doors trying to get out!

To continue his enjoyment of modern computer driven information services, fbb gazed out of his window at the electronic departure screens at each station. They read thus ...


Northbound Metropolitan Line
... and showed nothing else. Isn't technology wonderful? No. 3 son reports that this deficiency is commonplace.  But Sausage stock has pre-recorded announcements for every station. This message was broadcast as the train left Croxley Station.
"This is the Metropolitan Line service to Watford calling at all stations"
Helpful? Probably not, as Croxley is the last stop before Watford and there are no other stations to call at. A real live "man" (or "woman") wouldn't be stupid enough to say something like that, so why has someone programed the confuser to be so daft?
The "S" stock could be described as "functional", but the outside-hung doors and the less-than-tidy front-end design make them a poor aesthetic replacement for the 30 years old sub-surface line "D" stock family. 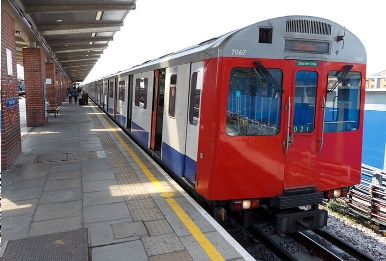 No 3. son also reports that the new trains have no straps for "strap-hangers", meaning that you have to be a good six feet tall to reach the handrails above your head. He reports of many occasions of frightening "passenger lurch" and consequently cringing seated commuters.

On the positive side, however, Sausage trains are bright, smooth, comfortable and they don't rattle. They are due to be introduced throughout Underground's other sub-surface lines (District and non-circling Circle) over the next few years.

Grappling with the fares fiasco that is London, fbb was travelling with a one day, Zones 1 to 6, travelcard on a super off-peak day return. A nice and easy recipe to remember as you queue at a busy ticket office, NOT. 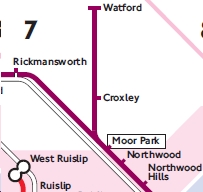 And of course you can't buy a combined rail and travelcard for any higher zone numbers than 6, can you? Of course not. Don't be silly. That can't be done. Why? Well, when the "combined" travelcard deal was introduced, zone 6 was the highest you could have and updating is beyond Boris, and everyone else.

So fbb intended to purchase an "excess" on arrival, honest!

But "the man" was busy on the phone and simply pushed his little button, opened the gate and let fbb out. Revenue Protection, who cares?

The stretch limo arrived after a few moments and fbb was able to complete his top-level executive discussions (!) and set off homewards. A future blog will summarise that return route, in due course.

**Navy Lark purists will remember that it was Leslie Phillips (on the right in the photo above) who couldn't drive HMS Troutbridge. His character was the deliverer of the order "Left hand down a bit". The show ran for 18 years and 244 performances.
Next blog : Saturday September 24th