Not an uncharacteristic outburst of asperity by the usually mild-spoken fbb but an accurate description of today's blog.
Between 1901 and 1916  two large reservoirs were constructed in the Upper Derwent Valley, north of Bamford. They were to provide water for the growing industrial needs of Sheffield, Nottingham and Derby. 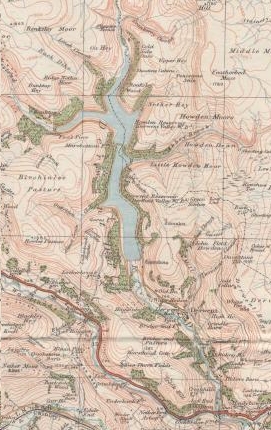 The road across the bottom of this 1930s map extract is the A57 between Sheffield and Glossop with Bamford and the Roman river crossing being about 5 miles due south. The Howden and Derwent dams were constructed with massive stone walls, adorned with Victorian gothic appurtenances, most notable being the two castellated towers. 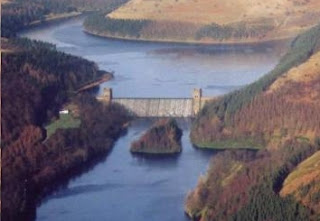 The stone for these huge engineering projects was brought in on a specially constructed railway from a  newly opened Bole Hill Quarry near Grindleford. 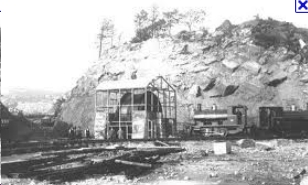 On-line information is contradictory. South sources say the line ran from the quarry via Bamford and up to the dam. Other sources suggest stone was carried on the existing railway from near Grindleford Station to a transfer siding at Thornhill, just west of Bamford station. The latter is more likely, but, then the question arises as to WHO did the carrying on the "main line"? From the pictures it would appear that Water Company trains ran on the existing lines, starting at the foot of a rope worked incline from the quarry itself. 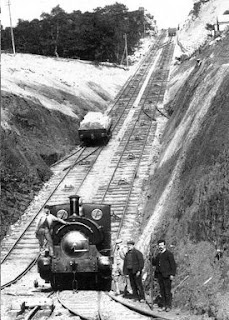 A few abandoned blocks of stone remain on the site of the short-lived quarry, which closed when the dams had been built. These humble monuments stand as a reminder of the enormous amount of sweat expended by the residents of yet another shanty town** as they blasted and carved the stone for the dam walls. 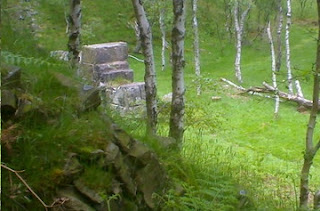 Whatever the detailed route of the stone it duly arrived at the dam sites and the huge walls were constructed as seen here at the base of the Howden Dam in about 1902. 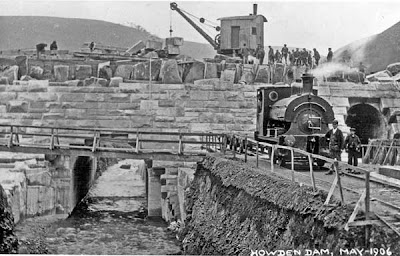 The loco was named "Buller" after Colonel Redvers Buller ... ... a hero of the Zulu Wars, and generally a jolly good fellow.

As well as carrying the stone, passenger coaches were also available; but fbb has, as yet, found to record of any timetable! In fact the coaches were probably used for "works outings", in a similar fashion to other reservoir projects in the Stocksbridge area, to the west of Howden and Derwent. More information from blog readers would be appreciated. 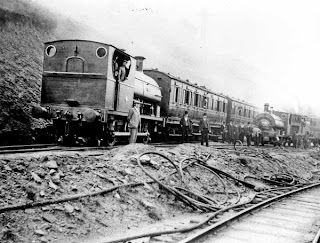 The majority of workers were accommodated in a specially constructed village at Birchinlee, now just a memorial on the west bank of Derwent reservoir. 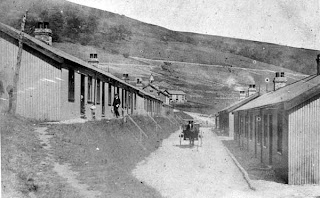 It was known locally as "Tin Town". The town had its own school, community buildings ... 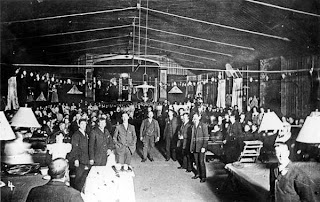 ... and shops. On Edale Road, in the nearby village of Hope, there is the last remaining Tin Town Shop, still in use today and presumably "liberated" from Birchinlee; at least  it was still operating when Mr Google Maps drove his camera car that way. 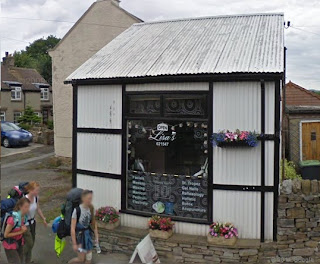 fbb is not at all sure how the tough navvies of Birchinlee might have reacted to "Lisa's" varied services, as offered in the 21st century. 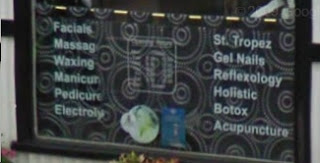 Very little remains of that constructors' railway, but, the Derwent Valley Heritage Way long distance footpath uses part of the trackbed. The line was, however, rejuvenated, in part, to assist with the building of the third and southernmost dam, Ladbower. This had a clay dam wall and was built between 1935 and 1945.

Tomorrow's blog charts the demise of the two villages of Ashopton and Derwent, demolished and inundated by the dammed waters of the third, Ladybower, reservoir. We also look at bus services then and (on Tuesday) how they have developed in recent years.

In these days of cut-backs and consequent service withdrawals, our reader may be surprised at what the fat bloke reveals. 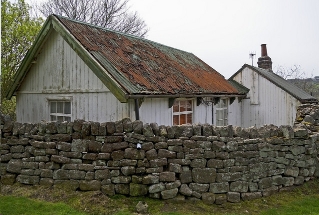