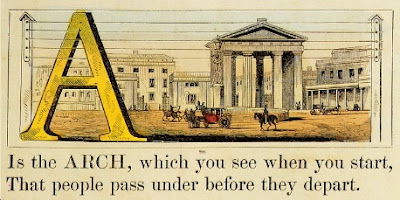 ... and this is what the Propylaea at the Acropolis in Athens probably looked like. A Propylaea (in Greek) comes "pro" = before the "pylon" = gateway; so it's a sort of a gateway to a gateway. 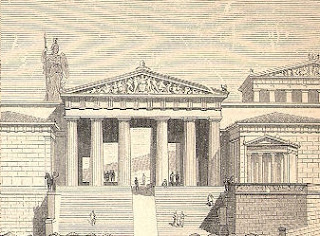 "The Entrance to the London Passenger Station [note from fbb ; it wasn't called "Euston" yet!] opening immediately upon what will necessarily become the Grand Avenue for travelling between the Metropolis and the midland and northern parts of the Kingdom, the Directors thought that it should receive some architectural embellishment. They adopted accordingly a design of Mr. Hardwick's for a grand but simple portico, which they considered well adapted to the national character of the undertaking."
Which became known as the Euston Doric Arch, seen below after further expansion of the terminus. 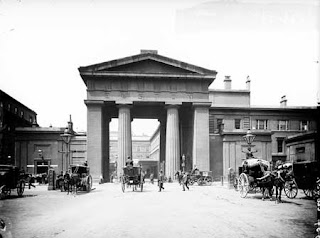 Euston probably suffered from being the first London terminus, but others followed. Paddington 1838, Kings Cross 1852, St Pancras 1867 and Marylebone 1899. So the London and North Western terminus developed piecemeal and never achieved the architectural homogeneity of the others. But the Hardwicks, father and son, created something of the desired opulence for passenger facilities, even if things at platform level were scrappy and disjointed. 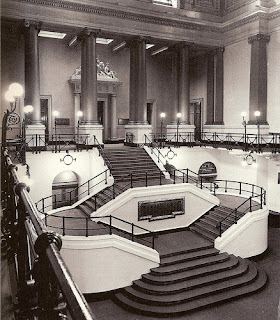 fbb well remembers his first visit to the Great Hall, then probably the most magnificent waiting room in Europe. You would only speak in hushed tones, respectful of the cathedral-like grandeur. Even in its tatty latter years, it was something special, something to be admired. 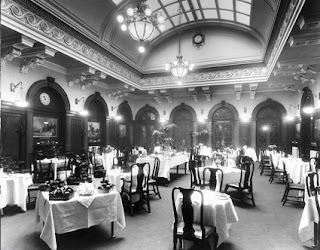 In the early years of the 20th century, long distance travellers would enjoy a four star dining experience, whilst the railway's directors could meet in a board room befitting the power and financial standing of the company. 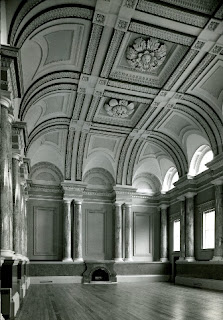 Even a humble haircut was special! 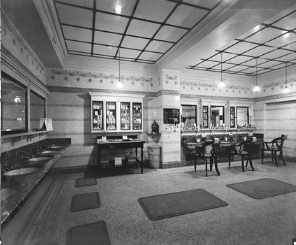 After all the lavish pampering provided, albeit enjoyed only by the "superior" echelons of society, one could, just about, cope with the smoky platform ... 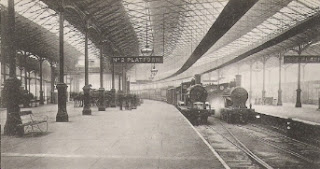 ... as one made one's way to one's reserved compartment. And if there was no time for a full meal, the trolley would be well stocked with good things ... 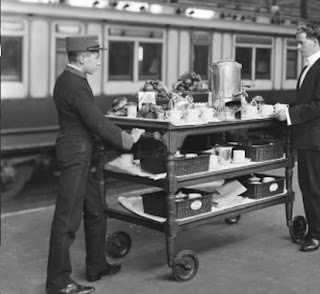 ... or one might take one's seat in the Dining Car. Top hole, old boy!

Certainly, things were VERY different from today's sweaty stampede down the ramp to join the rugby scrum and luggage heaving event that characterises the stress of joining a busy train at Euston in 2011. Relaxing, it ain't!

Sadly, the desire for profit overtook architectural considerations when the station hotel was built in 1881, blocking the view of the arch from Euston Road and destroying the open parkland "grand avenue" approach via Euston Square. 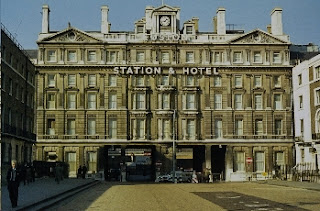 The decision to electrify the west coast main line, taken about 75 years later, was to result in total destruction of all that went before, both good and bad. Whilst most users could stomach the removal of Hardwick's piecemeal and clearly outdated station facilities, it was the doomed future of the Doric Arch that caused the highest levels of opprobrium.

Next blog : due Monday September 5th
Posted by fatbusbloke at 07:26