First Northampton operates a number of buses like this ... 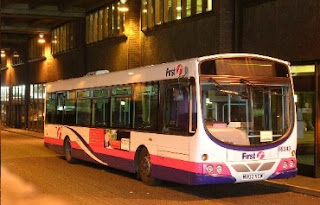 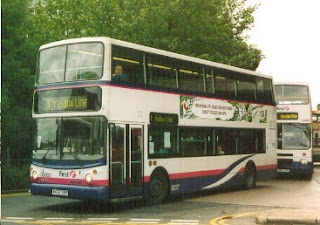 ... but nothing that might, even in a dark and gloomy bus station, be called "new" or "up-to-date". The vehicles all look tired, even terminally weary; they contrast unhappily with the Stagecoach fleet which is largely route branded and has a "feel-good" aura. Although fbb did spot a couple of Uncle Brian's buses branded for Daventry town services trundling around on Northampton local routes. Bad house point.
The First enquiry office on the main floor of the elongated Black Hole of Northampton ... 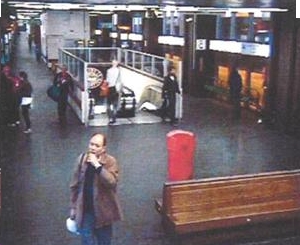 ... has long since been bolted and barred. There are leaflet racks on the closed office and at departure stands. 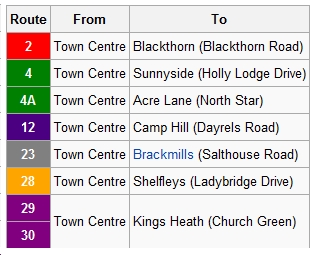 But on Wednesday (31st August) here was nothing available for services 2, 4, 4A and 23, the latter being an infrequent "works" service for which times are absolutely essential. Suggestion for local "management":- Invest in a photocopier and print out a batch for yourselves.
First cannot be blamed for the gloom and doom of the bus station; recently exacerbated by plastering adverts over many of the windows and covering up half the bus stand lighting panels with similarly useless blurb. Neither can First be held 100% responsible for the "un-real time" displays which have recently been upgraded and thus don't work properly. This was an example on Wednesday, past:-

Bus departures for the planet Zog?

First CAN, however, be blamed for printed and on-line timetables which give misleading information (and which ensure that Traveline and Transport Defunct do likewise). First 28, for example, shows just two journeys as starting from Sentinel Road. Dear Mr First: ALL your service 28 buses serve the Sentinel Road stop; these two just happen to start there first thing in the morning. 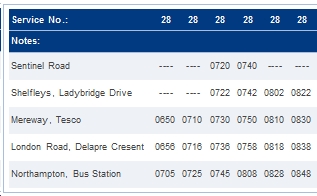 Then, on services 29 and 30, you cannot (apparently) go TO Kings Heath shops, you can only travel FROM this luxury retail experience (?). 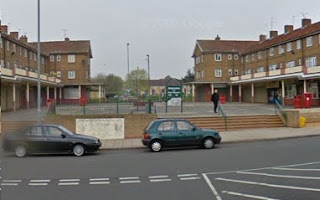 This is what the return timetable shows ... 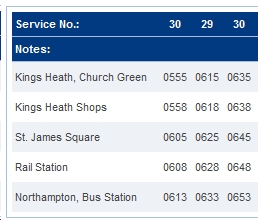 ... but the outward times fail to admit to the shopping centre. So, Mr First, here is the stop for the shops on the outward route, so you CAN get there. 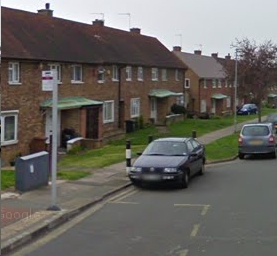 If you need help, it is just round the corner from Park Drive, in South Oval and almost opposite the shopping centre. Regular readers will be delighted to hear that it was from a shop in this very parade that a six year old pre-fbb bought his first Sherbert Dip. Scrummy.

Just in passing, it is worth noting that NONE of First's routes run in the later evening. Whilst revenue may be poor at those times there must, surely, be a down-side. If people can't get back home after an evening out, surely they will be forced to buy, and use, their own transport to go out. Then, having purchased the Ferrari... 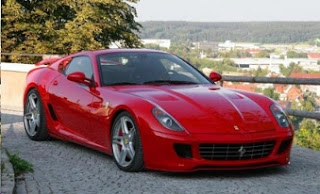 ... they will use it during the day. Dear First Bus, suggest you run a proper service, then people might be encouraged to travel more.

A quick glance at the sides of a few passing First vehicles might be indicative of the uphill task that GRF has given himself. Every bus must, by law, carry the name and address of its owning company. According to various vehicles' "legal lettering", (First) Northampton Transport appears to be based at St James', Northampton OR Leicester OR, a real highlight, this:-

Someone should tell the Borough Council that their town is now in Essex. Dear Mr First; don't you think that local management might just help your local image, as you run local buses, locally? There's a clue there, somewhere.

Next blog : due Saturday September 3rd
"Big Buses, Little Billing, a Tree and fbb"
Posted by fatbusbloke at 03:32