Not so Bad in Northampton?

?The cut-backs are cut back!

Early in 2011, Northamptonshire hit the national headlines by announcing that it would be withdrawing ALL bus subsidy COMPLETELY. Leaving aside the nicety that is it against the law to "subsidise" a bus service; legally the county is actually buying bus travel from the lowest bidder (spot the difference?); this decision would have denuded rural areas of their service and grossly inconvenienced those who did not drive their own little tin box.
fbb set this little exam on 4th June ...


What is Northamptonshire doing with its bus tender (subsidy) budget? Cutting it completely. Partly Correct.
How is the County going to replace lost services. It isn't. Practicably Correct.
But what about communities where there are no buses, leaving people trapped in their own homes? What has the County said it will do? From September 5th, it says that it will create a new and revolutionary network. Possibly Correct.
What are the chances that this new network will be successful? None. Probably Correct.
4 out of 4. Well done! You clearly understand the Council's policies. Cynical, moi?
The new network is now in place and, shock horror, in many ways it IS better than previous efforts.
The silly situation back then, whereby buses between Northampton and Overstone etc. required an unreliable change of bus in Moulton, has been resolved. By running through buses from Northampton, like they used to be. What a brilliant and original idea! 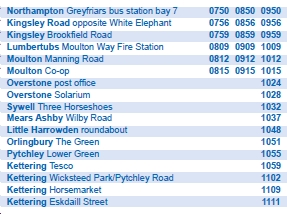 Also in June, this appeared on the fbb blog ...
Bonus for the denizens of Deanshanger who GAIN an hourly service to Northampton; but that leaves Cosgrove etc. unserved. So the worthy and imaginative councillors of Northamptonshire create a service 90. It connects with the 89 in Potterspury a bit less than every two hours. It is run by Centrebus, so it's a dead cert that there are no through fares and as people don't like changing anyway, custom will be minimal. It will never survive the final NCC extermination programme in September.
But it HAS survived, is slightly improved and now has 90A journeys to Wicken which lost out last time.

Way back in January fbb joined the residents of South Northamptonshire in lamenting the loss of their through buses ... 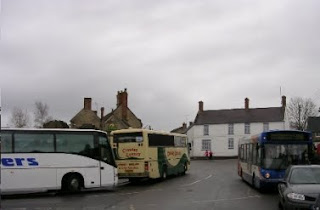 If you live in Brackley and need to get to Northampton or to the local council offices in Towcester, then the journey is potentially more stressful. It is not unknown for the Oxford to Silverstone bus to run so late that it misses connections leaving the brave through passenger to wait at those splendid interchange facilities!

Will the good folk of South Northamptonshire get their through bus back? Watch out for Gloucester Old Spots flying over Brackley. 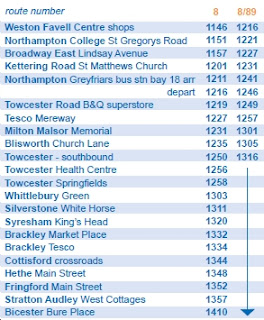 But the through service IS back, continuing to Bicester where connections are available with frequent buses into Oxford. A significant improvement all-round.
And, finally (for now?), in August, fbb lamented the poorly publicised demise of a bus service between Wellingborough Station and Town.
But it's all change these days, as explained by the ever helpful Northamptonshire County, seen here on 1st August 2011. This is the bus stop outside the station:- "There are no buses from this stop". [Withdrawal of buses to Wellingborough Station.] 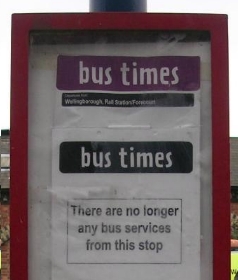 Yet again, from 5th September, the station link is back.

How has this piece of public transport prestidigitation been achieved? Like the work of Penn and Teller or Derren Brown, it is all a bit of a mystery. Certainly, instead of removing ALL the £3 millon "subsidy", a little over £1 million remains. Certainly Stagecoach have adjusted some routes to make them more "commercial" and a large number of one-day-a-week routes have gone completely. In one area (around Daventry) dial-a-bus links are in place, run, unbelievably, from Lincoln. 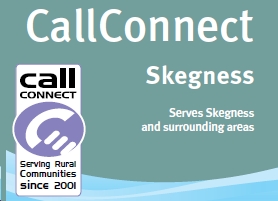 Some nagging doubts DO remain, however.
What happens when Stagecoach discover that their "unsubsidised" new-look routes still don't pay?
What happens when phone operators in Lincoln give duff advice to the residents of Welford and Buckby Wharf?
What happens when the £1 million budget doesn't QUITE pay all the bills, or, even more likely, when the overall council cutbacks are found to be insufficient.
And, finally, if it was so relatively easy to make savings, why couldn't this have been done before?
Answers, on a postcard, to ....
On second thoughts, don't bother. It's politics and we shall never REALLY know.

Next blog : Tuesday September 6th
Posted by fatbusbloke at 06:53