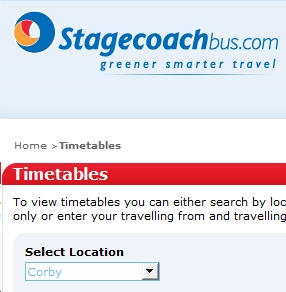 Modern technology ought to make things simple, so a click on "Corby" on www.stagecoachbus.com ought to deliver a list of Stagecoach buses running in Corby, in particular the CorbyStar network.
Sadly, the Corby Star brand is not mentioned and the page is cluttered with buses for Kettering, Wellingborough and Northampton. Why?
The site lists "Corby" services as
1, 2 (two versions), 2A, 3, 3B & 3C, 4, 5, 6 & 6A, 7 and 10
Clicking on some of these actually produces timetable pages but the 2A, 3B & 3C, 6 & 6A and 7 produce an answer similar to this:- 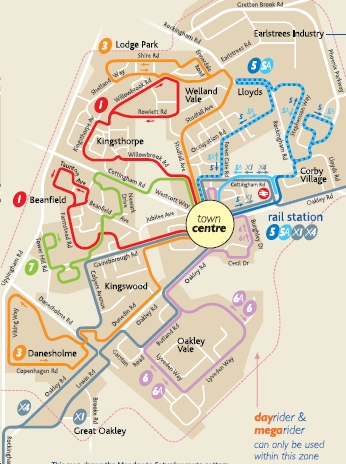 ... showing ALL the above except the 2A, 3B and 3C which might be works services. There is a general note about (unnumbered) works journeys beside "Earlstrees Industry", just off the map extract above. In additional to the "unclickable" 6, 6A and 7 we also have service 5A, not listed on-line.
What is also not on the map is both versions of service 2!
How about trying the Northamptonshire County Council [NCC] web site? There are many timetable changes from 4th September throughout the county, so sorting out what runs and what doesn't is a little tricky, but in Corby we appear to be offered:-
1, 2, 2B, 3, 3C, 4 & 4A, 5, and 10
Maybe we can find out what happened to 6 and 7 by looking at NCCs map? 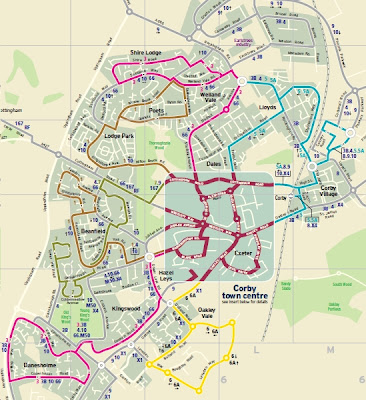 click on the map to see a larger version
No we can't because that still shows the 6, 6A and 7 and adds back the 5A. Once again important changes do not make it onto maps, doubtless produced expensively under contract by a specialist company. A simple vector graphics (? ask any 7 year old, they will explain it) program costs about £60 and takes very little skill to use. It's what elderly fbb uses, so it had to be very simple indeed.
Still not a graphical word about the enigmatic but excluded service 2!
Back to the Stagecoach site,then: one of the two service 2s is shown as running to Exeter Estate ... 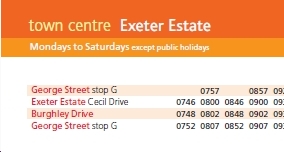 ... which appears on both maps with route 4 and 6 beside the roads. 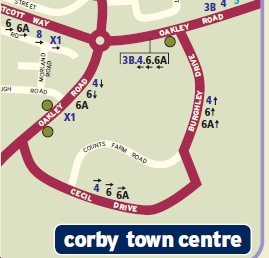 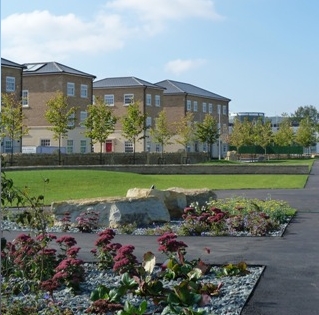 Priors Hall is indeed north of Weldon, but, far from being a blank on the map, is (according it its publicists) :-

Doesn't that make you fell good inside? No, it makes you rush to the sick bucket! But this "community, but not isolated" does have a Corby Star service 2 every half an hour. 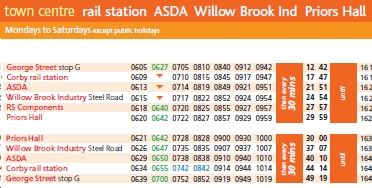 Of course that's Monday to Saturday daytime only; evenings and Sundays, tough luck, you will be very isolated without your own wheels; it's a long way to walk to anywhere! 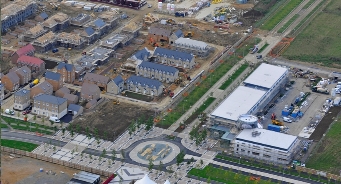 So, after much tedious and tiring technological trawling, fbb has just about "cracked it". But the key question remains. Do these people (Northamptonshire? Stagecoach?) actually use their web sites? Do they check on customer reaction? Or is is simply a case of "It's all on-line, that'll do".
Web Sites, Used or Confused? "Confused" in shed loads!

P.S. Since this blog was written (on Monday 5th) an up-to-date map of the Stagecoach network has appeared on-line. Everything comes to he who waits - eventually!

Nevertheless, bus services have to be registered with the Traffic commissioners eight weeks before they start; presumably new  networks and major changes are planned well before that. Surely there is no excuse for late updating of on-line information? 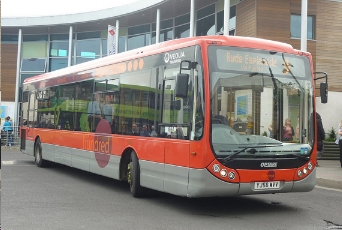 every 30 minutes to Pontypridd and Aberdare?
Actually service 9 from Ryde to Newport 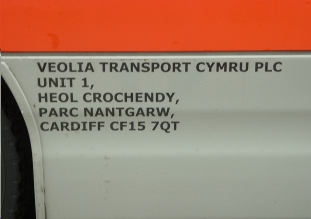