The Midland Railway opened its station at Wellingborough in 1857. As was common at a time when the "common man" did not travel often or far, it was a little over 3/4 mile to the town centre.
Tragedy struck on 2nd September 1898 at about 8.15 p.m. when a Manchester-bound express crashed at the pointwork to the north of the platforms. 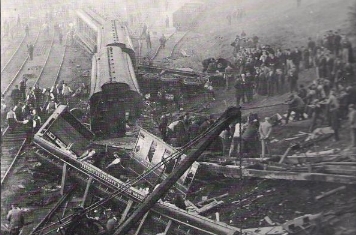 A summary of the Accident Report reads thus:-


A few minutes before the train was due to pass through Wellingborough a four-wheeled trolley fell of the platform onto the down line. Although efforts were made by two men to get the obstruction out of the way, the time available did not permit of this being done. The trolley was lying between and parallel to the rails, with its handle pointing northwards, at a spot about 40 yards from the southern end of the platform. The engine of the express, which was probably travelling at a speed not less than 60 miles per hour, struck the trolley and smashed it to pieces, bits of it being sent flying in all directions.
The leading bogie of the locomotive derailed on hitting the trolley, but the driving wheels did not; the engine continued onwards until it hit a diamond crossover at the north end of the station when it became completely derailed, detached from its tender and ended up facing backwards. The second passenger coach was completely wrecked. Both enginemen and five passengers were killed. 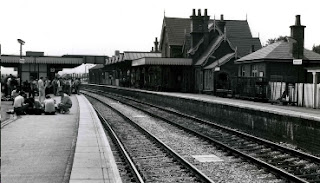 A youthful fbb, in the company of chum Tony, paid several visits to a footpath that ran from the station car park due north to Mill Road. They travelled variously by bike, by bus and on the "motor train" from Northampton Castle Station, seen here continuing north to Kettering. 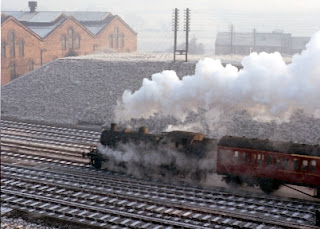 Around 1960, as well as fast passenger expresses and more sedate local trains, the highlight of the day was always the significant number of slow, heavy freight trains which clanked through, seemingly one after the other. 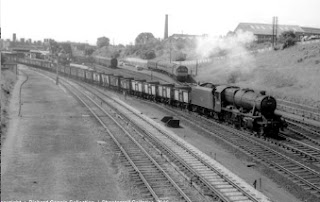 A lucky "cop" would be one of the unusual Franco-Crosti boilered 9F heavy haul British Railways built workhorses. Only a few (10?) were built experimentally to see if coal consumption could be reduced. Their distinctive feature was that they chuffed stuff from half way down the boiler, not from the normal funnel at the front, which was only used to draw the fire on start-up. Lots of information about the Franco-Crosti system is available here. 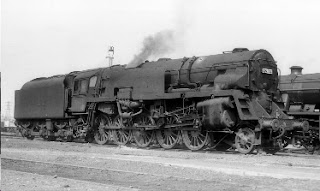 The young fbb soon lost the urge to collect numbers and moved on to Model Railways, but vaguely remembers that the beasts were rebuilt with conventional boilers. By the time his student days arrived, conventional freight was in terminal decline and most passenger trains were hauled by less exciting, but more efficient diesels. 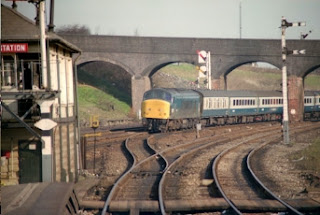 Wellingborough Station, although "off the beaten track" was never well served by bus, as here in 1979 with just a note guiding the few intending interchange passengers to stops  "round the corner" in Midland Road ... 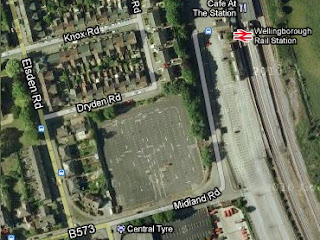 ... on the hourly Isebrook hospital service. 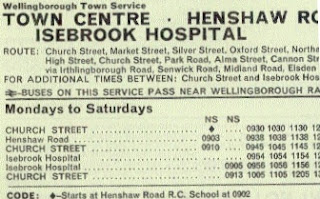 It is the present state of bus provision at the station that is the subject of "Weeping for Wellingborough" Part 2. At the moment, things are decidedly unhelpful, as we shall see tomorrow, Sunday 7th. The dreaded cutbacks strike again.

Next blog : due Sunday August 7th
Posted by fatbusbloke at 04:29