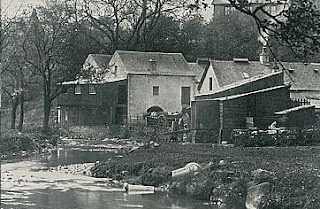 "Dhaibdhidh" is a bit more tricky, but if you replace the "bd" in the middle with a "v" you get something like "David". Unfortunately our Caledonian Cousins were just as bad at reading gaelic as fbb is. The familiar version, "Dave", is written using gaelic letters that look a bit like "gave". Indeed  a modern rendition of the gaelic spelling is Muileann-Gaidh. 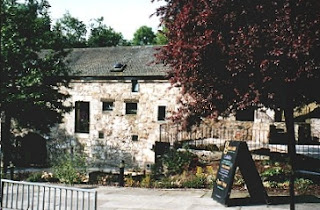 The Mill still exists, now a coffee shop, with the name "Gavin's Mill". The "Gavin" is another corruption of Dave, as in the "Gavie" of Milngavie. Blog readers will be fascinated to know that fbb and his parents enjoyed coffee here on the morning of his wedding in 1973.
So Muileann Dhaibhidh becomes Muilan Gave, then Miln Gavie, then corrupted to Mill Gaie, dropping the "v", and gets pronounced "Mull Guy". Not a lot of people know that.
What a plethora of pointless pearls of wisdom pour from the agile brain of the fbb? Anyway, to continue, the town centre used to look like this ... 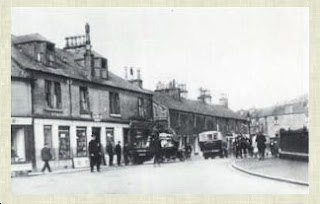 ... but now looks like this, having been rebuilt and pedestrianised with the clock added in 1981. 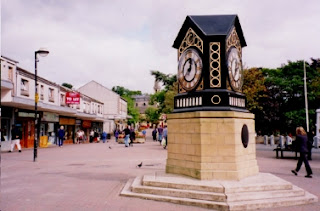 The clock, by the way, used to adorn Copland and Lye's department store in Sauchiehall Street, central Glasgow, which closed in 1971.

It was rescued, refurbished and re-installed at Milngavie as a "feature". Many of the traditional stone shops were demolished in the destructive 60s and only the little park remains (far right) as a reminder of the old central area.
The railway reached the town on 28th August 1863, by way of a branch from Westerton. It subsequently acquired two freight "offshoots", one of which ran via a bridge under Station Road to the Milngavie Paper Mill. 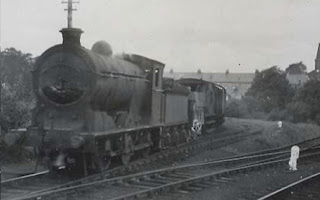 The present Ellangowan Road uses the former trackbed and the bridge. The paper mill site was developed into a leisure area with lakeside walks and the new Milngavie library, again in the early 70s. 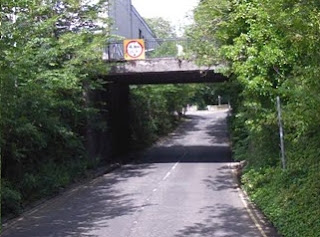 The other branch was to a Dye Works to the south of the town, at Burnbrae on the main road to Glasgow.

The works was quite extensive with buildings on both sides of the main road ...

... with the railway branch being built alongside the burn (stream) that ran down the brae (hillside) that gave its name to the area and provided a water source for the works. 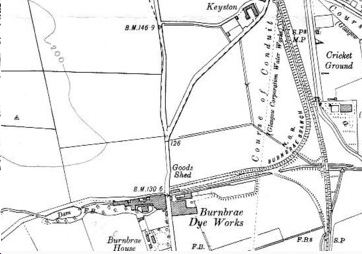 In another piece of personal nostalgia, the future Mrs fbb used to baby-sit at Burnbrae House  (bottom of the map) for two shillings an hour. It was, literally, just around the corner from home (now with modern windows, but otherwise little changed) where the future Mrs spent her formative years. 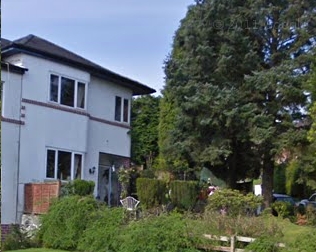 We will meet the Dye Works branch later in this saga. Burnbrae house has gone, replaced by a clutch of modern residences more prosaically numbered 277, 277a and 279 Milngavie Road; hey ho, we're all getting old ...

P.S. For those who relish even more personal detail, Mr and Mrs fbb "tied the knot" at New Kilpatrick Parish Church, Bearsden, on 14th April 1973. [talking of tying knots, must remember, it'll soon be 40 years!] 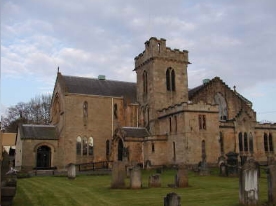 Next blog : due Tuesday August 23rd
Posted by fatbusbloke at 00:56