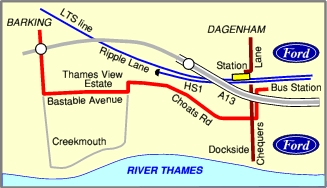 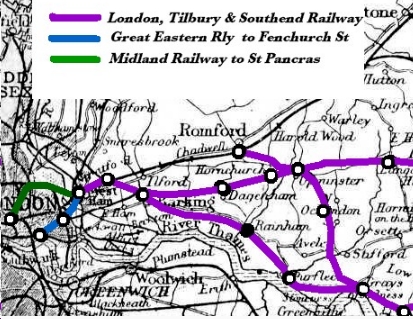 When the London Tilbury and Southend Railway opened its more direct route via Upminster in 1885, a station was built at Dagenham, on the Rainham Road, later the A112. It was in a rural location, some distance from the village. Under LMS ownership, the line was developed to provide a service of frequent electric trains. This was in 1932 ... 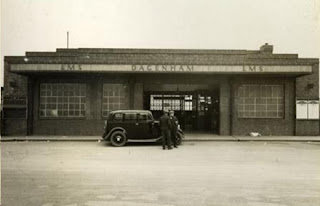 ... when a more useful station was also opened at Heathway, a rapidly developing shopping centre for the growing town, seen here in 1948. 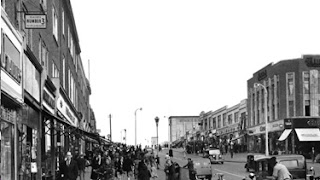 Dagenham was renamed Dagenham East, and Heathway became Dagenham Heathway in 1949. Now, they are both served by frequent London Underground District line trains.
Meanwhile, Dagenham Dock Station had opened in 1908, on the original line via Tilbury (opened in 1854), to serve growing industrial development on Chequers Lane and was served by steam trains until the line was electrified in 1962. 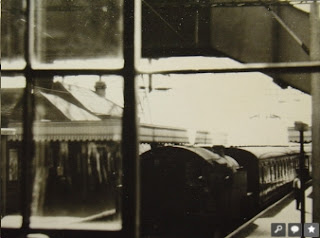 The mainstay of the electrified route were class AM8 (later re-designated 308) electric multiple units ... 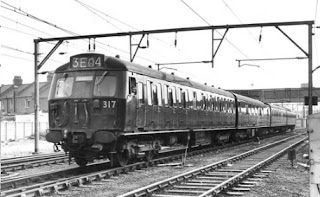 originally turned out in British Railways Green and later donning the corporate blue and grey. 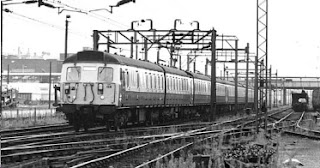 Under on-going privatisation, Prism Rail and subsequently National Express, provided shiny new Class 357 stock which has turned the unfortunately dubbed "misery line" of the 90s into one of the most reliable commuter routes in the south east. Even the line's name was changed to c2c, supposedly abbreviated from "coast 2 capital". 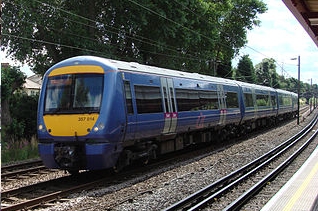 Needless to say, with the forthcoming re-letting of the franchise, the line is to be renamed again. This time to "Essex Thameside".

Well, it provides work for painters and vinyl manufacturers and more dosh for "loadsamoney" PR consultants and "image advisers".

By the way, Department of Transport, shouldn't that be "Thamesside", two letters "s"? If not it's Thame Side, which might be a football team in Oxfordshire or Thames IDE which could mean something to do with underwater computer hard disc drives. [IDE = integrated drive electronics; so now you know!]
Dagenham Dock Station was visually transformed from 2006 onwards when work began on the high speed channel tunnel link from Ebbsfleet to London St Pancras. These tracks run towards London alongside the LTS line across the Rainham and Dagenham Marshes, before plunging into tunnels just before Ripple Lane container terminal half a mile or so nearer to central London

It was this HS1 construction project that led to the permanent closure of the level crossing on Chequers Lane and its replacement with a footbridge and lifts, the latter remaining resolutely non-operational until June 2011. The A13 flyover can be glimpsed in the distance. A junction on the A13 now provides the road link to the dock area. 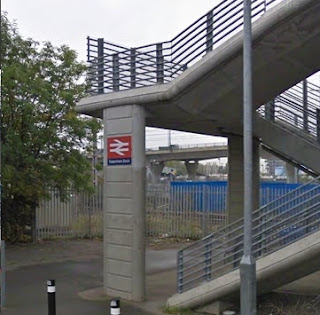 ... hourly on Sundays, between London and Grays; and Dagenham Dock station is, we are told, lightly used. As it sits in the middle of a vast tract of warehouse-style industry and on a road that no-one uses anymore, this is not the most surprising passenger use statistic! Here's a pretty pic of the station at night. 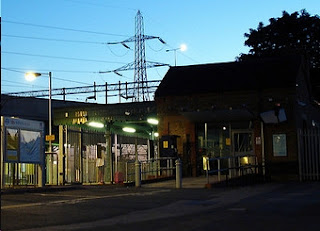 But all this isolation from the real world will change in the next 10 to 15 years. Well it might, if Mr Cleggeron and his successors can find the money.

So now we need to look at the buses; and that new footbridge becomes rather important (eventually).

Next blog : due Wednesday August 10th
Dagenham Dock Week
Posted by fatbusbloke at 03:16