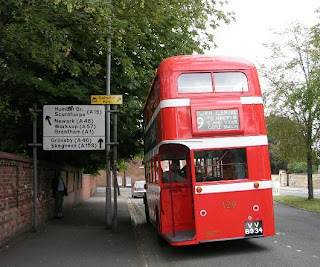 This bus is a preserved Northampton Corporation Transport Daimler with Roe bodywork, delivered in 1949. It is running a trip from the Lincolnshire Transport museum at Hykeham. It is both an example of Civic Pride and possibly of Prejudice. "Surely someone who spends their own money (and lots of it, too) on something like this is a bit of an eccentric, a bus nut."
Each year a "nostalgia" running day is held in Northampton, and later this month it is hoped that bus 129 (VV 6934) will attend. It will join some of these ... 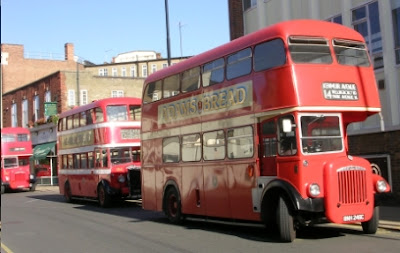 ... and here's a better view of the one at the back, still, when this was taken, awaiting its civic crest. 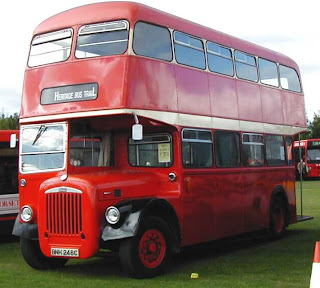 
To expect all of these, of which some are duplicate types, to be resurrected is unrealistic; but maybe some. And what of the single deck Daimlers and Leyland Nationals, presumably lost and gone for ever? 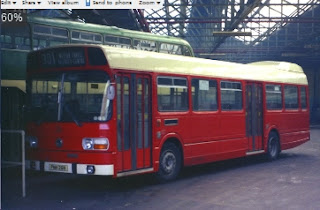 But a more telling question is this. Now that civic pride is replaced by nationally owned commercialism, will anyone ever be bothered to preserve this ... 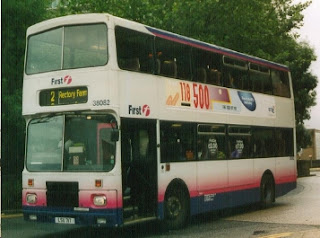 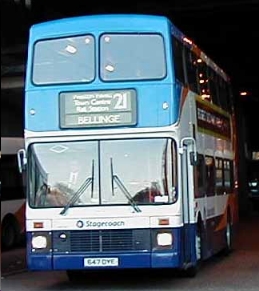 Civic Pride cannot be replaced with affection for other towns' "hand-me-downs".  Thus the richness of our Municipal Heritage will slowly fade away as the next generations of  "bus nuts" see no point in preserving that which is already seedy and second hand. Fortunately civic pride remains in a few places; Nottingham, Edinburgh, Cardiff, indeed MOST of those towns and cities that have held on to their bus operations, albeit at a Government enforced "arms length". 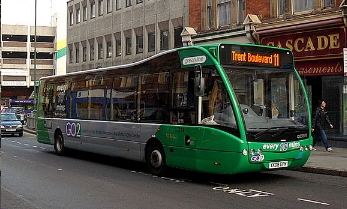 And in Brighton, Roger French has successfully incorporated the remnants of Southdown and Brighton Corporation into the Brighton and Hove company and re-created immense civic pride whilst under the ownership of Go-Ahead. So, it can be done. 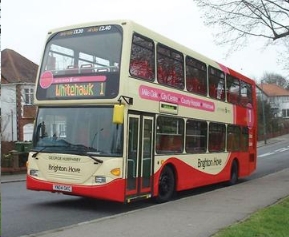 How about something similar, First Bus? Something less cluttered up with ticket price offers, Stagecoach? Something a little different, occasionally, from boring blue, Arriva? If not civic pride, certainly Local Pride for local services needs to be rebuilt.

Meanwhile, 129's owner has created a truly magnificent web site covering both the history of Northampton trams and buses AND his personal commitment to hard work in the preservation of his beautiful bouncing baby. You can find it here.  Read it, and enjoy!
Next blog : due Monday August 15th
Delayed Dagenham Part 5
Posted by fatbusbloke at 06:53