The first railway to reach the Metropolis was the London and Birmingham Railway.  It opened its terminus, ... 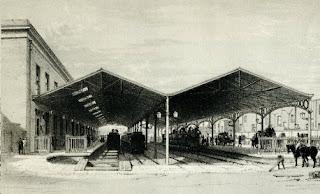 ... later called Euston, on 20th July 1837. There were two explanations of the solution to the problem of the "Bank", a relatively steep rise from the terminus to Camden. Either the hill was too steep for the low powered locomotives of the day OR locos were banned by the lordly landowners near the station. Neither explanation really fits words written in 1839:-
Peter Lecount, one of the railway's engineers, wrote in his "History of the Railway connecting London and Birmingham".
It is not because locomotives cannot draw a train of carriages up this incline that a fixed engine and endless rope are used, for they can and have done so, but because the Company are restricted, by their Act of Parliament, from running locomotive engines nearer London than Camden Town. 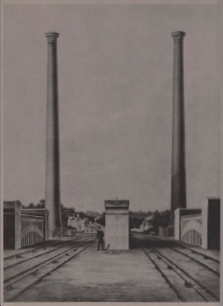 The stationary engines and rope haulage did not commence, however, until 27 September, and handled all trains from 14 October 1837. Until then, and whenever the rope system was stopped for repairs, Possibly banned locomotives hauled the trains up the incline. From November 1843 some expresses were worked without recourse to the rope, and from 15 July 1844 the rope working ceased permanently.  So they were forbidden (possibly) but the company ignored this when it suited them. 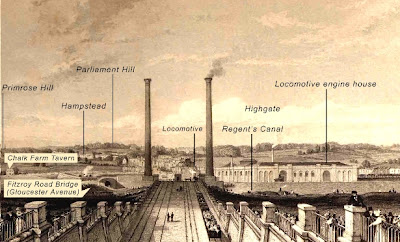 This view looks northwards with the Camden depot on the right. fbb suspects that it was a good depot, not a loco depot as shown. Certainly the later loco depot was to the left of the main line, freight to the right. The somewhat sanitised engraving is a little economical with the truth, but you get the idea. 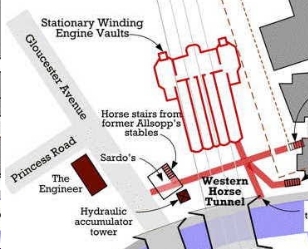 Operation for arriving trains was straightforward. The engine was detached at the top of the bank and the train ran under gravity power controlled by a "brakesman" down the hill into the platform. On the engraving (click to enlarge) you can just see a loco at the top of the hill and a line of open carriages descending the bank.

For departing trains it was more tricky. Coaches had to be manhandled round the curves at the station throat, then attached to the continuous rope using a "messenger", a length of chain or cable. The platform staff then used a telegraph system to alert the winding house and the train was hauled up the hill. At the top a locomotive was attached and the passengers could wend their merry way northwards.

Apart from the distinctive slender chimneys, a tourist attraction of the day, the works at the winding house were all buried in vaults below the main lines. These catacombs still remain although not open to the public. They are "listed" and in good condition but subject to flooding from the canal. 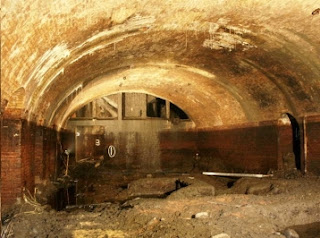 A more detailed account of the winding house is available on-line here. Well worth a read.

A final fascinating factoid. Just off Gloucester Avenue, tucked behind a block of flats and on the edge of the main line tracks, is this:- 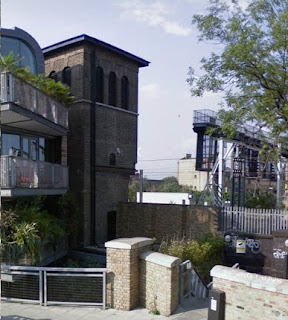 It is a "hydraulic accumulator" tower. A what? The goods lifts in the big warehouses, built as the railway expanded (but now demolished), were hydraulically powered (that's real hydraulics, i.e. water pressure). The tower, effectively a header tank of water, was to ensure a constant and adequate pressure in the system. A little bit of history which still stands, preserved but ill-documented, as a monument to our Victorian industrial ingenuity.

So as you speed out of Euston, electrically powered with not a sign of stress as the hill is climbed, give a thought to the technology used for just seven short years as the pioneer line opened. Or you might ride behind a preserved steam loco and experience the roar of the exhaust as the monster at the front hauls its load up the challenging slope of Camden Bank. 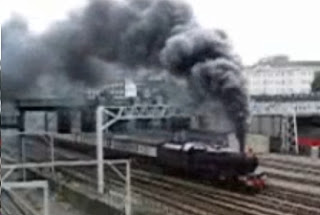 Tailpiece. On the engraving of the winding house chimneys etc. above, look closely and you will see Chalk Farm Tavern labelled (far left), then isolated in open country. The pub later moved about 100 yards along the road but the (second) building still exists, now a restaurant but, of course, no longer surrounded by peaceful open country. 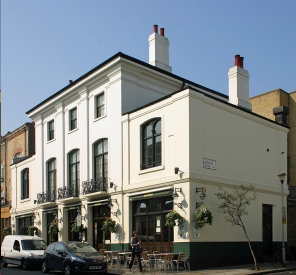 Next blog : due Tuesday August 30th
Posted by fatbusbloke at 06:58