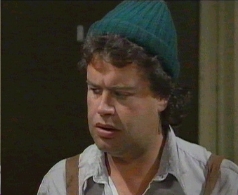 No! Wrong Benny. It's about this Bennie, George Bennie to be precise. 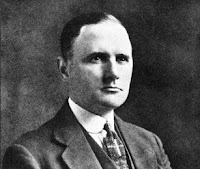 George Bennie (1891-1957) was born in Glasgow, Scotland, but spent much of his youth at Rothesay, Isle of Bute. The son of an engineer, he turned his own inventive skills towards the area of public transportation and patents were granted in 1923.

He had a vision, which had it succeeded might have changed the face of Britain, arguably for the worse. It is the rusting remains of his vision that we saw behind the Alexander Midland Milngavie bus depot in Episode 2. 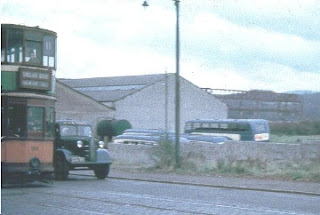 This was George's vision ... 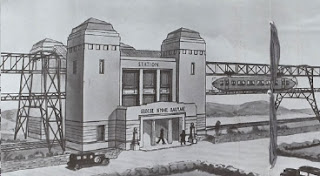 ... a network of high speed suspended railcars, with powerful electric motors driving aircraft-style propellors. And to demonstrate the idea he built a line above the straight section of the Burnbrae Dye Works branch as mentioned in Episode 1. He even persuaded the railway company to run a loco and a few wagons up the old siding and this formed the basis for some imaginative posters. 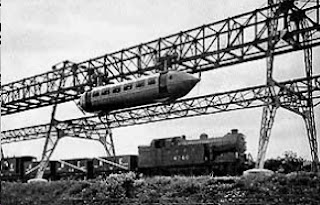 The picture above has led some sources to report, erroneously, that the track was "built over part of the railway line to Milngavie". He arranged practical demonstrations for potential clients and financiers, all, sadly to no avail. The line was so short and the cars so underpowered  that speeds of 5 mph were all that could be achieved. 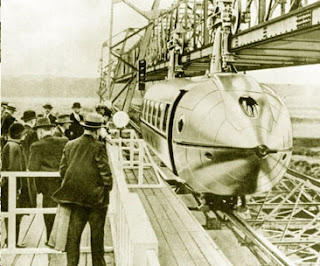 The project never got any further, although there were proposals to run between Glasgow and Edinburgh and between London and Croydon Aerodrome, neither of which got off the drawing board.  The structure and its single car remained in place until demolition in 1956 (seen here in the early 50s with the bus depot behind the steelwork) ... 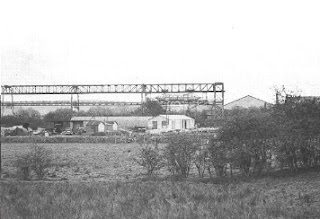 ... for the future Mrs fbb and her childhood chums to dare each other to climb up and look inside. She was never brave enough to accept the dare! But, today, there is just one tangible memory of Bennie's shiny silver white elephant. At the Burnbrae end of the line, he built a hut to house electrical apparatus. He bought his electricity from Glasgow Corporation Tramways. 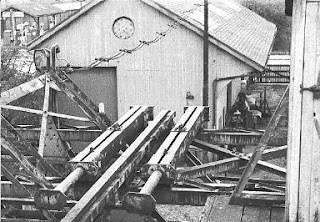 Amazingly, a mere 56 years after demolition of the line, the hut is still there. It roof overhang has been chopped about a bit, but the shape is still recognisable as seen from the main road. fbb wonders whether the customers of Kelvin Timber (or, indeed, its owners) have any idea of what transport magnificence was powered from with its four wooden walls.
Buses, trams, trains and the railplane all come together to make Davy's Mill (Milngavie) a source of Massive Delight. Todays buses ... 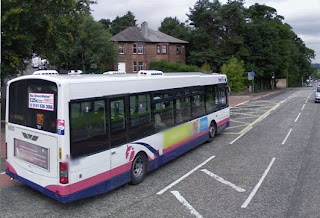 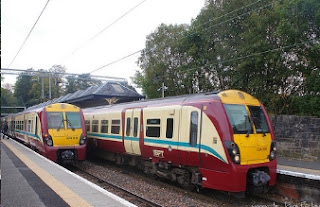 ... trundle past without a thought for what might have been, as first demonstrated close by, over eighty years ago. 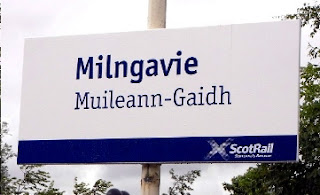 But at least we now know why Milngavie is pronounced Mull Guy; read again from Episode 1.

George Bennie had been declared bankrupt in 1937 and died in a nursing home, penniless and almost forgotten, in 1957; less than a year after his pride and joy had finally gone to the scrapyard.

A film of the railplane in motion can be seen via a link here. In the last fleeting seconds of the clip, you can glimpse the railway line from Milngavie to Glasgow in the background.

Next blog : due Thursday August 25th
Posted by fatbusbloke at 05:57