From "An Edwardian Sunday, Broomhill" by John Betjeman


High dormers are rising
So sharp and surprising,
And ponticum** edges
The driveways of gravel;
Stone houses from ledges
Look down on ravines.
The vision can travel
From gable to gable,
Italianate mansion
And turretted stable,
A sylvan expansion
So varied and jolly
Where laurel and holly
Commingle their greens.
Broomhill was reputedly Betjeman's favourite suburb, historically where most of Sheffield's leading businessmen had their up-market residences. 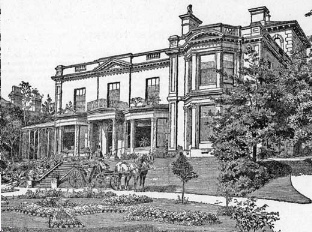 Even "middle management" occupied substantial properties as with these two; here joined to form the Rutland Hotel. 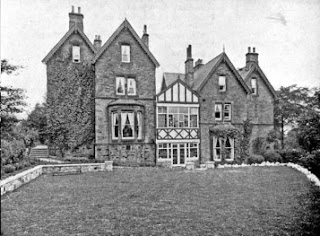 The peak of residential perfection was "The Mount" 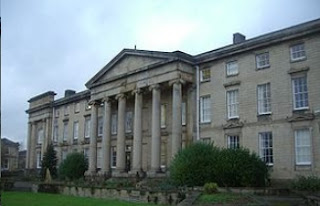 This magnificent pile was built by the local architect William Flockton in 1830-32. At the time of its construction it stood in a rural situation and was nicknamed “Flockton’s Folly” because it was thought to be too far out of town to attract potential buyers. Flockton was in fact emulating the trend set by Bath’s Royal Crescent and London’s Regent's Park in constructing a building that looked like a country mansion but in fact contained eight separate dwellings.
During WW2 the building became the home of Walsh's department store; their city centre premises having been destroyed by bombing. The block has had various renovations since, the least attractive of which added an ugly car park excrescence, seen here lurking behind the wall in the mid 60s accompanied by a service 60 bus. 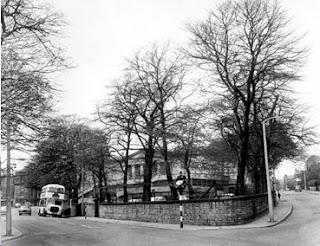 But for most bus passengers, Broomhill is, and always has been, its parade of shops, on both sides of the Fulwood Road. 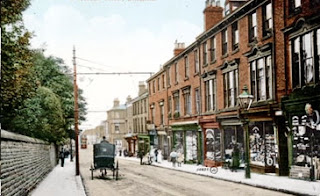 Most of these were  family run businesses with customers being the servants from the big houses. The tram in the distance is on the Fulwood route which was converted into the 60 motorbus in 1937. The view is much the same today, although one parade of shops was rebuilt in the 60s. 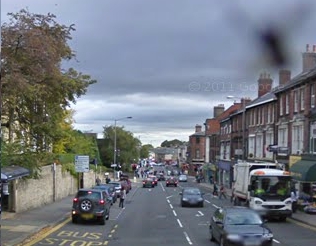 The wall on the left has been "pushed back" to widen the road. 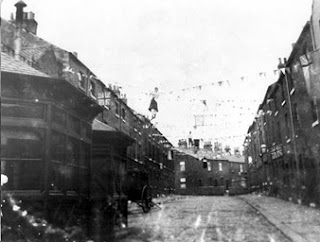 There were some houses for the "lower orders" on the fringes of the suburb.
From Crookes Junction, at the north east end of the shops, the Crookes tram branched off. From 1937, of course, it ceased to be a junction and in 1957 ceased to have any trams; but fbb was still advised in 1963 to "catch a car [i.e. tramcar] to Crookes Junction." Many Sheffielders will still use such anachronistic phrases today. Here is a recent shot of a Stagecoach service 52 bus, having turned right at "the junction". Fulwood Road is off to the left. 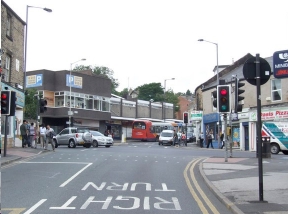 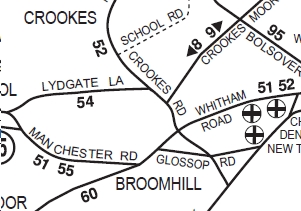 Part 2 (tomorrow) will look at today's buses for Broomhill and how they are advertised by Travel South Yorkshire. Expect some "interesting" comments!
** Ponticum = Rhododendron ponticum, the common rhododendron (Greek for "red tree", incidentally), now a much maligned and invasive shrub. Next blog : due Friday August 26th
Posted by fatbusbloke at 07:10