"But does it work?"
It is helpful here to understand the services that use the busway. Long ago BBC [before busway commenced] Stagecoach ran a service between Cambridge and Huntingdon via the A14 and St Ives. Instead of the A14, this route now uses the busway, running every 20 minutes Monday to Saturday daytimes and hourly every evening and all day Sunday. This is Busway route B.
The anti-busway brigade will gleefully point out that it takes just as long, if not longer, to get from Huntingdon and the nether reaches of St Ives to Cambridge via the busway as it did via the A14 (although they quietly forget the peak time delays, only quoting off-peak schedules!)
Additionally, buswise, there is a 20 minute frequency Monday to Saturday daytime only from St Ives Park and Ride (on the outskirts of the town) to Cambridge city centre, Cambridge Station ... 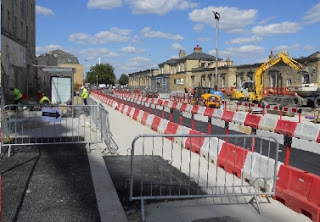 ... where things don't look too ready; and on to Addebrooke's Hospital and Trumpington park & ride.  This is Busway route A.
Then there is Busway route C, run by Go-Whippet which is a once an hour variant from Cambridge to St Ives (town) and occasionally going forward to Somersham. There are also some journeys labelled Busway route D which don't seem to be explained anywhere but look like Cs following the B route. Hopefully the locals know.
The crunch question is, "will Mrs Miggins and chums be willing to totter to the stations, not necessarily in the best location for foot passengers, thus making the combined 10 minute service viable?" 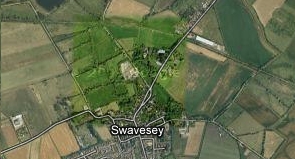 Swavesey Village, for example, is at least half a mile from the busway, further from many addresses, so most punters will stick with the hourly service 5. 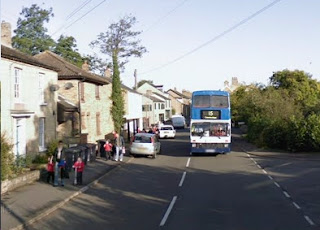 It's even further at Longstanton.

Then there's the fares fiasco! On the busway itself you have to buy your ticket before you board from these pretty blue machines. Sweet. 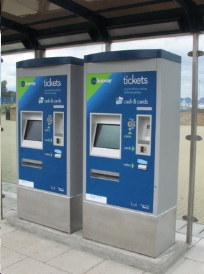 BUT, and wait for it, tickets are not interavailable between the two operators. So you buy a Stagecoach ticket and Mr Whippet whips along and you can't get on. Or, vice versa. And currently Whippet's fares are significantly cheaper than Stagecoach's "premium" charges. And unless you carry high powered binoculars, you can't tell which operator's vehicle it is anyway.

The timetable (which can be viewed here) doesn't even explain who operates what!
This is how Cambridgeshire County Council explain it all, succinctly. First, Stagecoach:- 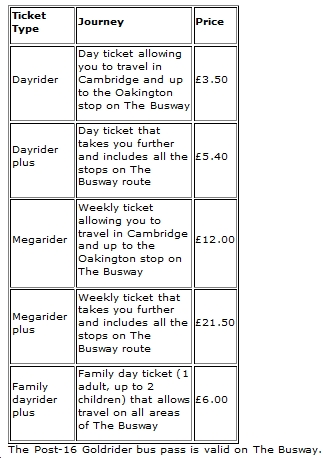 So that's pretty straightforward then. Pause to allow a new customer to take a few tranquilisers and jibber incoherently in a dark corner..
Then what about maintaining the weedy busway?

Not a piece of slang; it IS literally very weedy. 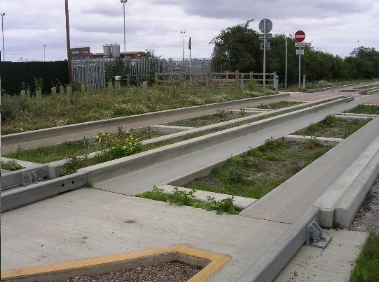 What happens, asks our local newshound, when this lot grows and starts getting tangled into guidewheels, steering, kneeling stuff and the bottom of opening doors?
A further snag. Because the routes no longer use the A14, they miss out the village of Fenstanton, so a shuttle service 20 runs every half an hour between there and the St Ives park and ride station. Here's one arriving. 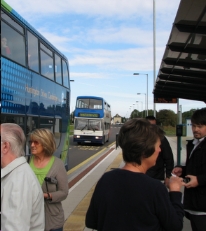 Extra cost for the passenger and extra cost for Stagecoach. And Joe Public is resolutely averse to changing buses anyway.

It is, of course, dead easy to pick fault; BUT the busway is super smooth, satisfyingly speedy from the new stations and suggests "quality travel" to the disillusioned A14 car queuer. It NEEDS to succeed, but will it deliver its promises?

The jury, as they say, is out. The common man didn't want the tram in Sheffield, neither did the city's traders. Loadings were initially a disaster; the ticketing system was crackpot and doom was predicted. But now, trams are full and folk are clamouring for extensions.

Further busways are planned between Luton and Dunstable and at Leigh in Greater Manchester. Let's hope the promoters are proved right.

Tailpiece: In a noble attempt to prepare for an onslaught of confused, critical and cantankerous customers, Stagecoach have provided themselves with an enquiry office at St. Ives Park & Ride station. An fbb blog exclusive pictures it here to the left of the shelter. 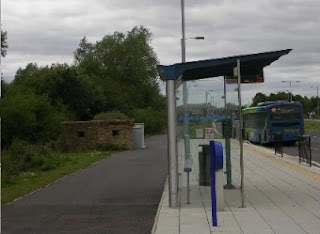 Well out of the firing line!
[Thanks to our Northampton correspondent for the scoop.]
[A couple of pictures were "borrowed" from "Omnibuses" blog, see comment below]