Are They Having a Laugh? Still Sniggering! 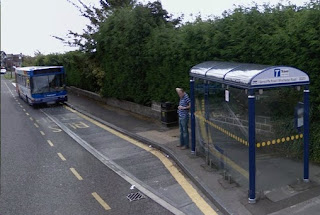 ... in particular the corrected (?) information posted on Tuesday.
The date at the top of the notice (11 August, just "offstage" on fbb's image clip) implies a change from that date: there  wasn't, and note the prominence at the top given to the last Stagecoach bus at night which runs to Hallamshire Road to complete the loop, not what you and I know as Fulwood. Curiously the last First bus 15 minutes later apparently does not complete the loop in theory, but I am not going to put it to the test! Part of this problem stems from the fact that both First and the PTE call the Hallamshire Road/Barncliffe Road/Crimicar Lane loop "Fulwood" instead of "Crimicar Lane" the term used for many years quite rightly to distinguish it from Brooklands Avenue, correctly and accurately described as "Fulwood". 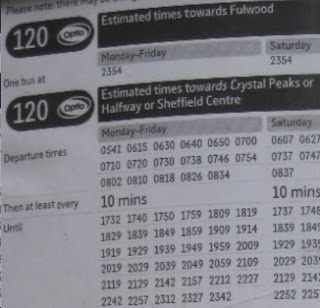 And the lone 2354 which claims it's going to Fulwood most definitely does NOT got to Fulwood at all!

It just trundles down the hill to the end of the terminal loop at Hallamshire Road. My guess is that no-one would EVER board at Barncliffe Road to travel to Hallamshire Road. So why not leave it off the display rather than mislead people?
The main panel suggests that buses go to Crystal Peaks OR Sheffield Centre OR Halfway; presumably the driver tosses a coin or throws a die. [note pedantic use of correct English; "dice" is the plural of "die"; you can't throw A dice!]

In fact ALL** the buses in the main panel go to Sheffield Centre and Crystal Peaks; SOME of them continue to Halfway but TSY keeps that a closely guarded secret for Barncliffe Road passengers. Of course, they might understand if TSY posted a timetable at the stop, rather than a list of departures.
And, IF you are to believe the companies' official registered timetables, NONE of these times is estimated; they are the real, actual and scheduled times for departures from that stop.
So perhaps a grudging 5 out of 10 for trying to get it right. In the interests of debate a "correct" departure list for Monday to Friday can be seen here.
But now, praise where praise is due. Regular readers might remember this:- 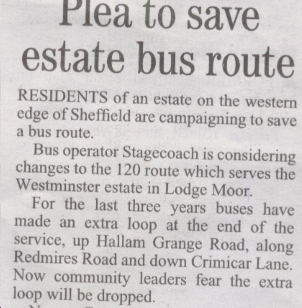 Well, the 120 did change and residents of the "extra loop" lost their bus as it merged with, and adopted the route of, the service 40. 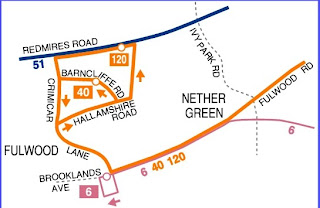 But someone, somewhere, in the bowels of TSY towers does listen. From 5th September a service 123 will be extended from the Student Village on Endcliffe Vale Road to Crimicar Lane and round the former 120 loop. The revised 123 will provide a half hourly service on Monday to Saturday daytimes; not quite the every 7 minutes of the previous service, but better, as they say, than nowt. 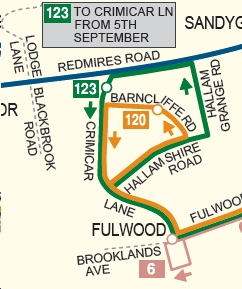 The new 123 timetable leaflet suffers from the usual TSY "loopy" problems; so you travel TO Hallam Grange Road but you search in vain for journeys from there to the city centre. The leaflet cover fails to mention that the buses still serve the Student Village, which is why the 123 ran to the west of the city, anyway. And, in an outburst of computer-generated nonsense, the route description tells us that we can travel to Hunters Bar, Broomhill and Beighton.

It's a wonder anyone gets where they want to go at the first attempt; perhaps they don't?

fbb will be back "oop north" in October to have a try. Should be interesting?

Next blog : due Friday August 19th

** The 1819 and 2342 departures from Barncliffe Road (Monday to Friday) run to Sheffield Centre ONLY.
Posted by fatbusbloke at 03:28