The Monks At Jarrow 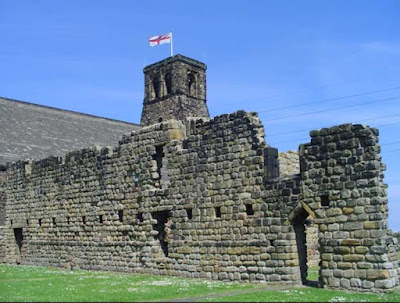 As the Monks at the Abbey/Monastery at Jarrow sang their Benedictine routine of daily services in plainsong ... 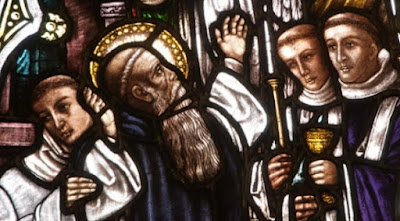 ... so Go Ahead North East intones a repeated sombre incantation as part of its recently-published "consultation".
That word has a very different meaning in the bus industry than its use by ordinary folk. Usually, in bus-speak, it means "We are asking for your views but have no real intention of taking any notice of them. But if we "consult" the Local Authority may be more inclined to slip us the odd thou." Work continues to rebuild passenger numbers across our network, but we’re now at the point where it’s clear some services won’t recover to the point of being viable without changes or external support.
Given the huge changes in the way many people are working and living, including things like home working and online shopping, it is only right that services are adapted to efficiently meet new patterns of demand.
We are now in a position where we need to look at making changes to ensure that our bus network is sustainable. We are working closely with local authorities on any possible replacement options where there are reductions in services, although noting their budget challenges.
We have analysed our services in great detail, and developed a set of proposals as outlined below. Please carefully read the information for your area, and help us shape the future of our bus network by completing our consultation survey. Your feedback is very important, as it will help us determine the final proposals which are introduced.
The survey is open until 31 May 2022. All feedback will then be collated, analysed and proposals amended where necessary with a view to implementing any changes from 24 July 2022.
Hmm? Maybe?
There the follows a list of 58 services (or groups thereof) which are going to change including the mysterious 734 which does not appear on the company web site!
It will not be practicable to review ALL of these changes because rapidly the process will assume the excitements of watching paint dry.
So what follows is a summary. Keen students of the Go Ahead network can do their owen research.
But first, some plain-song ecclesiastical incantations which appear with doom-laden frequency in the description of the changes.
X-lines X5 & X15
There are some journeys, particularly early morning, in the evening and on Sundays which do not carry enough customers to cover the costs of operating them. We are working closely with local authorities on any possible replacement options, noting budget challenges.
This text is repeated dozens of times throughout the "consultation". The "usual suspects" are for the prune unless Durham County finds some money down the sofa - which is very unlikely. Both the evening and the Sunday service on the X5/X15 are already reduced in scope.

Two hourly, anyone? Or nothing at all?
Then comes the route specific change. 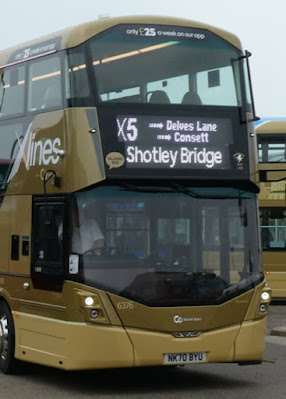 Here is a chunk of the existing timetable ... 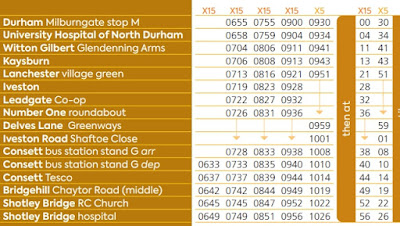 ... and what is "proposed".
Our proposal is that this service would now operate to Castleside, replacing service 78, instead of running to Shotley Bridge. This provides a more reliable service for Castleside, as well as a faster, direct link into Durham from this area. The service to Bridgehill and Shotley Bridge Hospital would be replaced by Red Kite Ranger 47.
Map, please! 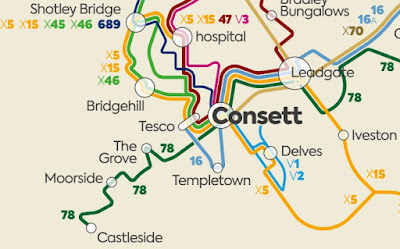 After going via Bridgehill to Consett bus station, the 47 service will extend to Shotley Bridge Hospital, maintaining local connections and access to the hospital site.
Not quite! Delves and Iveston would lose their link to the Hospital.
And the 78?
We propose the 78 service goes back to terminating at Consett instead of Castleside. Castleside would now be served by X-lines X5/X15, improving reliability of the service to Castleside and offering a direct service to Durham.
Currently the 78 provides a link between Castleside, Stanley and Chester-le-Street which will be lost.
But there is no doubt that this "simple change" is more complicated than just tinkering with the X5/X15.
Another example:-
Metrocentre Express X22 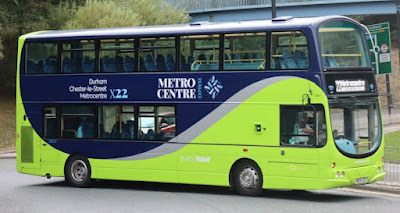 We propose that this service does not return at the present time due to reduced demand. Customers still have the alternative option to travel to Metrocentre by travelling on the Angel 21 or X-lines X21 to Gateshead and then the Metrocentre Shuttle X66 from there. 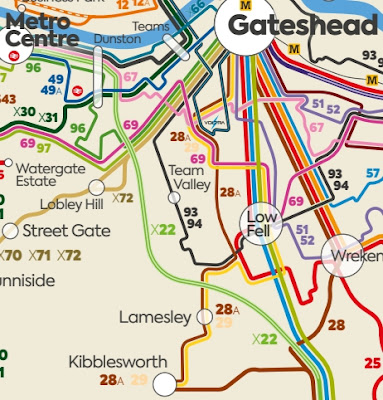 The X22 linked Durham with the MetroCentre shopping paradise (a k a shopping hell). It zapped straight down the A1 dual carriageway avoiding the grunge in the Gateshead area. It will not return having been suspended recently.
X-lines X30 & X31 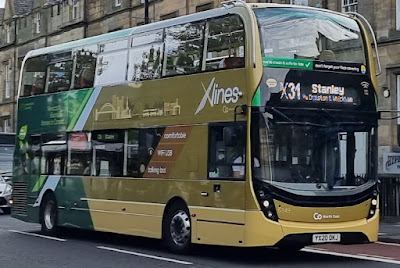 Reduced by one third. This is the main "direct" link between Newcastle and Stanley. 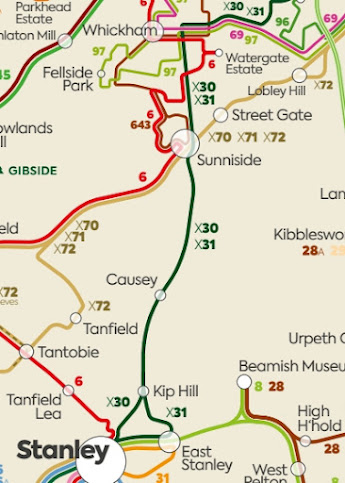 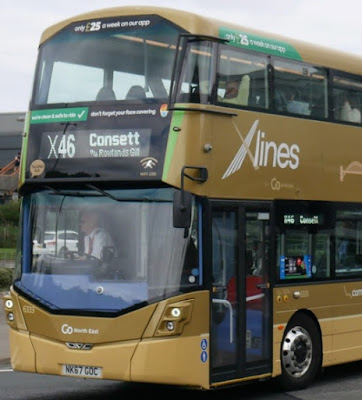 ...due to the lower numbers of customers using this service. Customers travelling from Bridgehill will still be able to travel to Consett and Newcastle on Red Kite Ranger 47, which would now see all journeys running via Bridgehill, providing a service up to every 30 minutes. 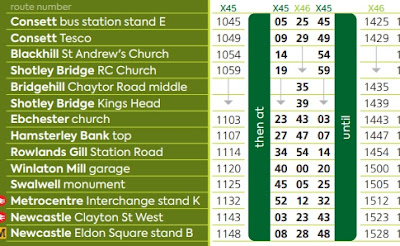 Reduced by one third. This is the "direct" service between Newcastle and Consett. 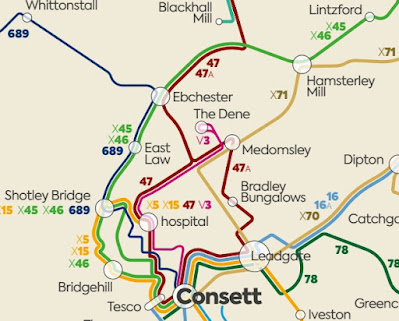 There is a pattern emerging. Where practicable Go Ahead are looking at a reduction of one third in the X Lines network.
X-lines X70, X71 and X72
We propose that services X71 and X72 continue to operate on the same route as now, with service X70 withdrawn due to low passenger numbers. 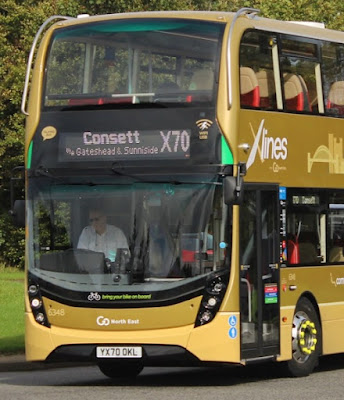 Alternative travel options are available on other services such as Durham Diamond 16 and X-lines X71 and X72. 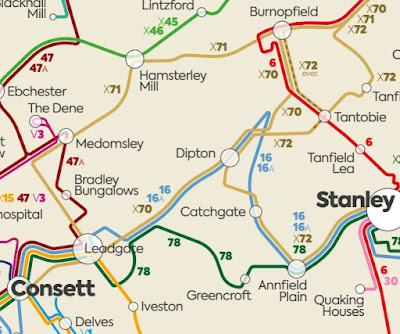 The Durham Diamond 16, referred to as an "alternative" is only an alternative locally; because it runs to Durham and not Newcastle.
Looks like another one third chop! 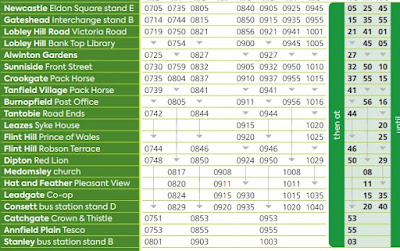 Yep!
And, just a reminder, almost all of these have the early morning, evening and Sunday plainsong incantation in addition to the changes reviewed above.
There are some journeys, particularly early morning, in the evening and on Sundays which do not carry enough customers to cover the costs of operating them. We are working closely with local authorities on any possible replacement options, noting budget challenges.
This blog has been an incomplete look at what is proposed for the high profile X Lines routes. Interestingly, the doom mongers have been predicting about a 30% reduction in services as part of Building Back Better (don't laugh, you really need to cry.) and Go North East seems well on the way to fulfilling that prophecy.
But we have been here before, haven't we? In the early days of privatisation, operators pulled out of evening and Sunday services. One man and his bus start-ups jumped in to won the tenders, but they did not make enough money so they started competing with the incumbent
Is the competitive chaos likely again?
Probably not. It is both harder and more risky to "get into" running buses and there is less appetite for "having a go". But, this time, IF the gaps are to be filled, more Local Authority and or Government money will be needed (that's fbb's money and his readers' taxes) and, sadly, there is not going to be enough. 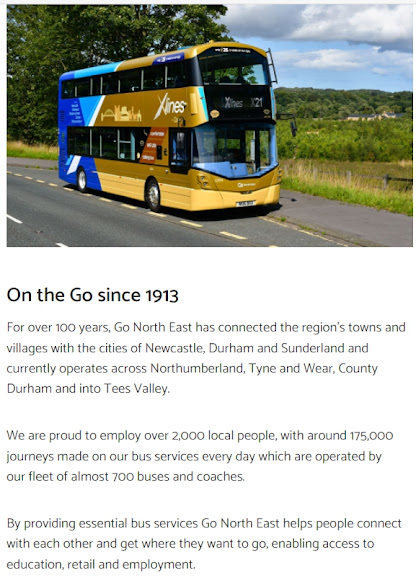 Perhaps not quite so many passengers after these forthcoming changes.
But there are routes proposed for complete withdrawal, not just a 33.3333% short back and sides.
More tomorrow.
Next GoAhead Going Backwards : Tue 24 May
Posted by fatbusbloke at 02:00