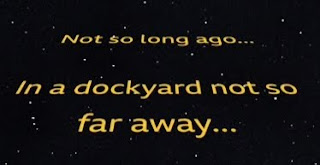 Always at the forefront of mind-blowing technology stories, the BBC has revealed this:- 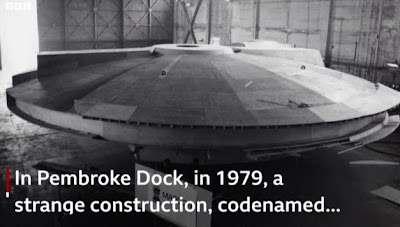 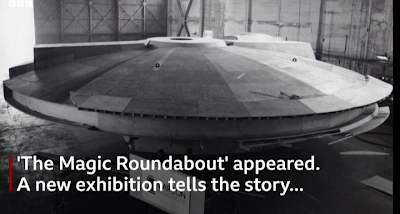 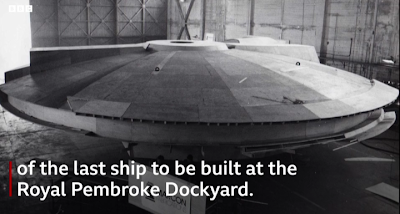 In a weird twist of fate, the general manager of Lucasfilm, progenitor of the Star Wars "franchise" comes from Pembrokeshie! 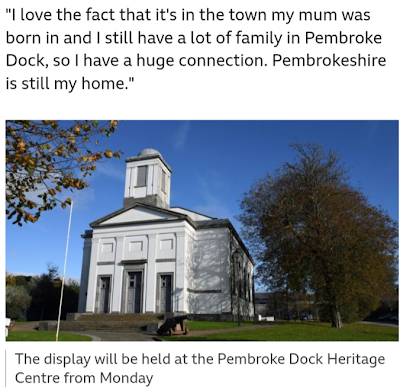 Sadly, the vessel itself will not be flying in!...

Transport for Wales will soon be introducing "TramTrains" on certain of the Valley Lines serving the Welsh Capital. They are scheduled to operate on the Rhondda, Merthyr, City and Cardiff Bay lines. 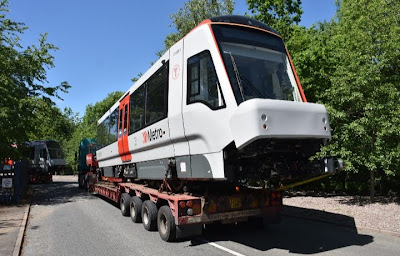 They are "British Railways" class 398. 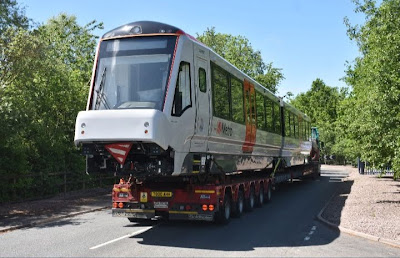 ... and that ugly-looking front "buffer" isn't. It folds down to give the front end (and the back end of a 3 car unit!) a sensible appearance. 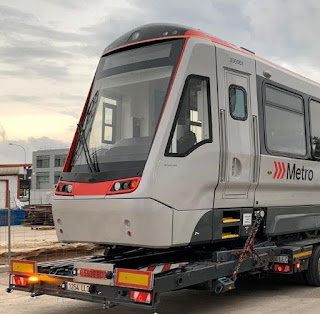 TfW will be playing trains with them for a while but they may appear later this year - or maybe early next.
Timmy And Siddy Sample The Travolator
In episode 2 of the current series, Timmy and Siddy were exploring the Waterloo and City Line. This took them to Bank and a ride on the famous Trav-o-Lator from platforms to Booking Hall.
The new platform for the Northern Line is now open. 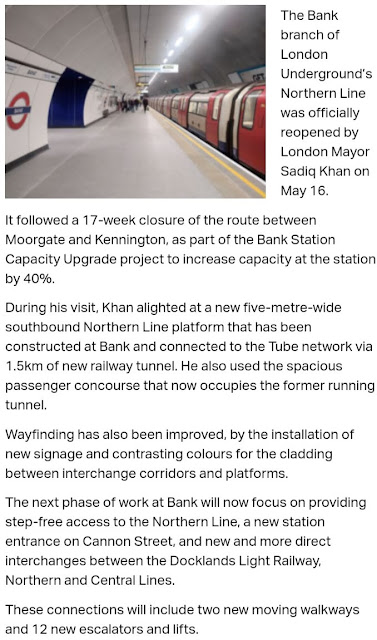 Timmy and Siddy returned to Bank briefly in Episode 3 which explored the former terminus of what became the Northern Line. The terminus (King Edward Street) has been repurposed as an access shaft for the Bank rebuild work. 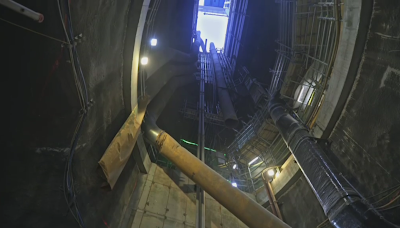 With excitement verging on delirium, the exploratory expositors found some london clay (wowsers) ... 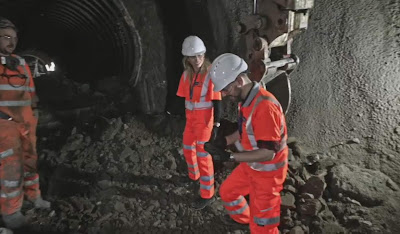 ... where the old iron-ring tunnel was being joined to the new diversionary tunnel lined in sprayed concrete. They even met a concrete sprayer! 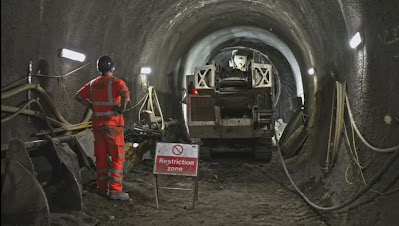 But they could see the join! 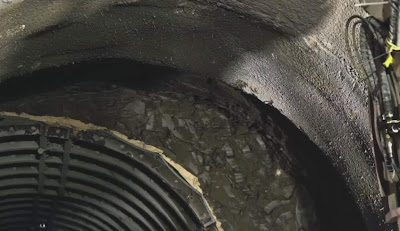 On they bravely trod along a bit of the new tunnel ... 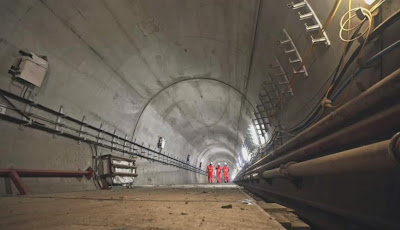 ... until they reached the new southbound platform.
But in an unexplained shot, as they continued to explore the new station, they did walk quickly past some extra building work. Briefly we spotted the second Trav-o-Lator being installed at Bank. 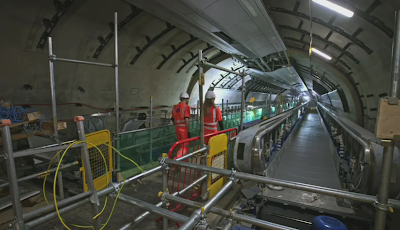 Below is an artist's impression looking from the other direction. 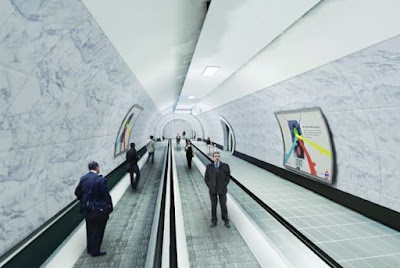 It will provide a faster and less exhausting link The Northern Line with the Central line platforms and, at the opposite end, with Monument Station on the Circle and District line. Yes it is unbelievably complicated!
The new Trav-o-Lator is not yet open.
Episode 3 also included a Siddy solo piece about Knightsbridge station where lifts are being installed in the long-closed original lift shafts to provide step-free access. The old lifts were driven by a real human. 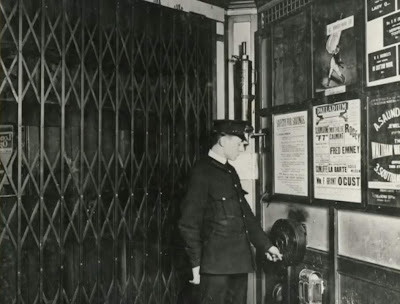 The new lifts, installed in the same holes ... 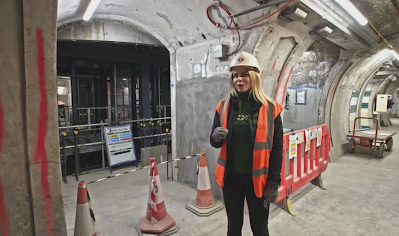 ... will, of course, be fully automatic. The tunnels leading to the lifts have also been closed for many a long year.
Siddy was very excited about the original coloured tiles ... 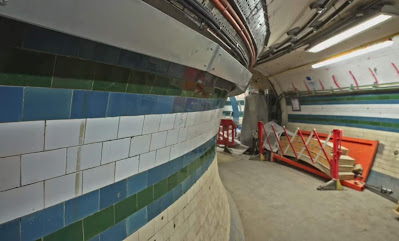 ... understandably so as they are about 90 years old. Some are being preserved and incorporated in the refurbished and reopened bits.
The full episode can be watched on UKTVplay. This coming week's 45 minutes of uncontrolled excitement from the ebullient presenters (plus 15 min of adverts!) is on Thursday, on the Yesterday Channel, at 2000.
It is entitled, "Brompton Road". fbb is intrigued.
Platinum Purple 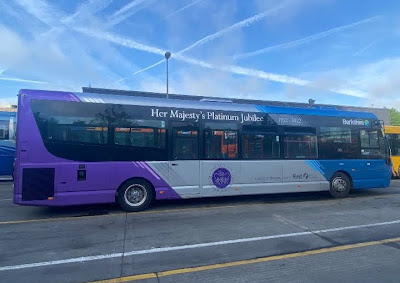 fbb was somewhat underwhelmed at First Berkshire's Platinum Jubilee bus. Whilst there is an element of "design", from a distance it looks like a fairly standard First Bus with the official logo plonked on.
Maybe there has been a headquarters diktat, because in Sheffield ... 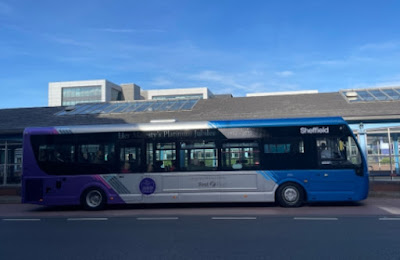 ... First have exactly the same. Maybe the ambient light is different, but the same livery looks a bit better in Sheffield. 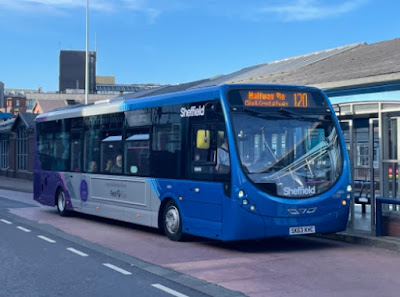 The rear end in noticeably purple! 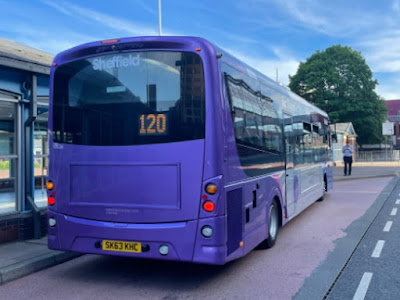 Thanks to Roy for the pictures.
P.S. Lots Of Smiles For Lovely Tiles
Specially for Siddy!
If the next station to be visited were Barons Court, Siddy could be ecstatic about the very green glazed tiles that adorn the booking hall. 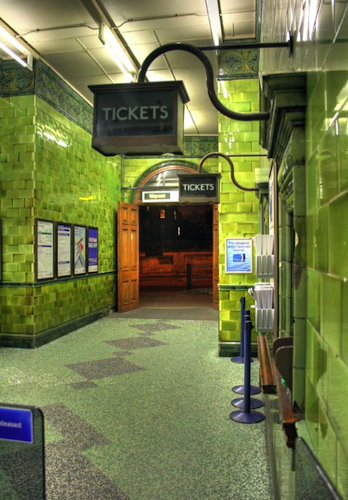 It's a bit like booking your ticket in a Victorian public convenience!
Next Variety blog : Sunday 22nd May
Posted by fatbusbloke at 02:00