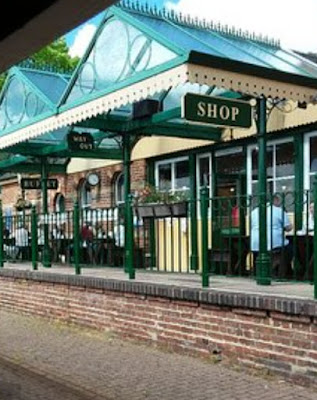 One of the fbbs' favourite watering holes is the Tramstop Cafe in the former Colyton Station. A real favourite is lunch on the tables now installed on the former platform ... 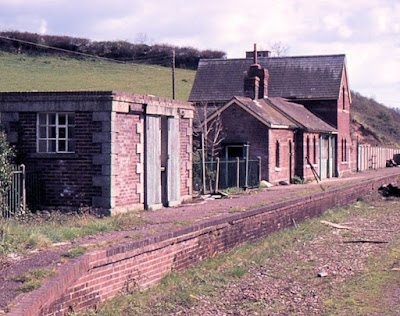 ... of the original "proper" railway station. From there you can see how the terminus operates. Trams arrive off the single track "main line" and take the loop passing close by the original goods shed (painted white). 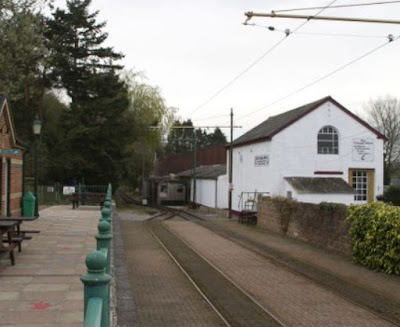 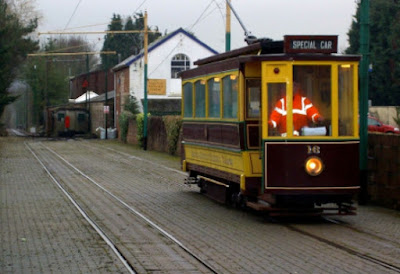 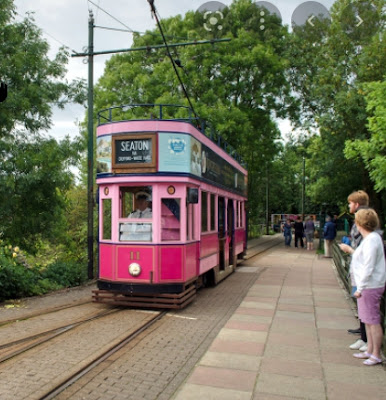 After the previous tram has left, the next departure moves forward on the other track, passing under the automatic trolley pole reverser. Passengers are loaded at the Seaton end of the platform, once again near the former goods shed.
Thus it was that the fbbs were tucking into their Saturday 'n'chips lunch when the blue tram trundled by to collect its Seaton bound load ... 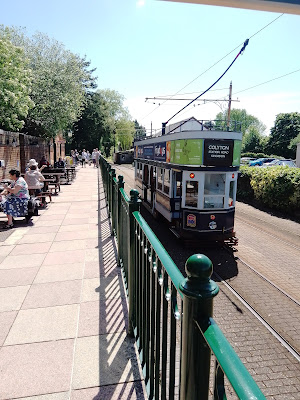 ... and stopped. After some clunking of the controls, the driver alighted and looked confused. The tram was busted. 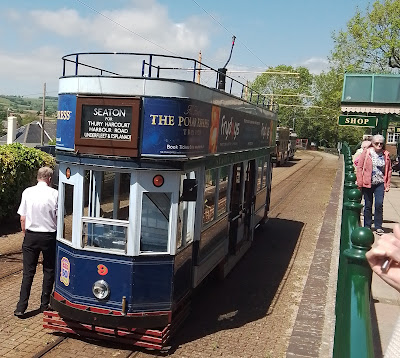 It would not go. Soon afterwards the next tram arrived, accompanied by a replacement vehicle for the blue busted one. 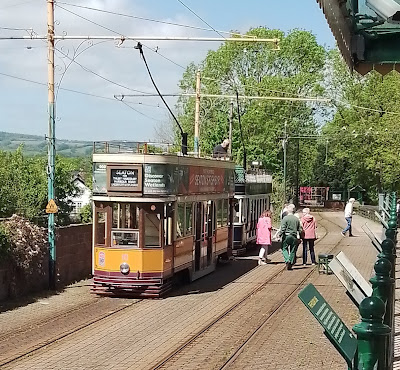 Obviously the cars would not be able to use the blocked loop and it was necessary to reverse the trolley pole in the good old fashioned way. 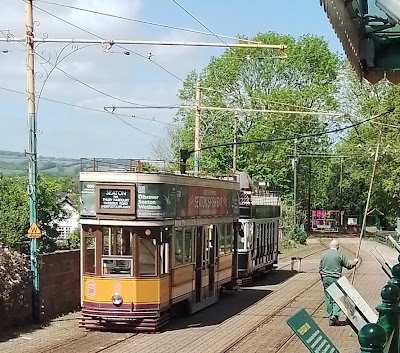 The "orange" tram then pulled forward "wrong line" to load ... 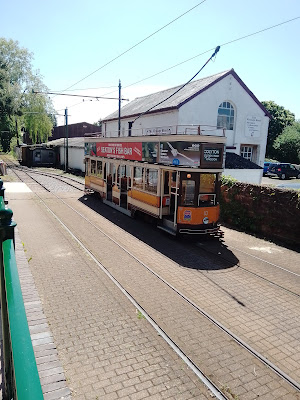 ... and set off for Seaton. Next to arrive on the scene was a man in a boiler suit and equipped with a large spanner. 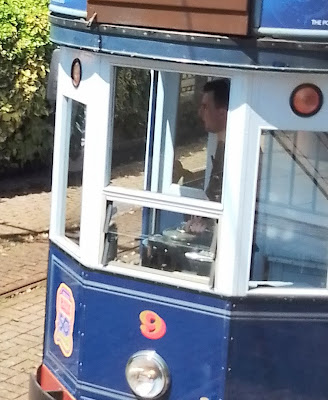 After cheerily greeting the disabled driver, "Well, Harry, you've broken another one, then?", he set to work.
"It just died!" the driver riposted by way of explanation and fbb can confirm that it did indeed just die.
Man-in-boiler-suit proceeded to clunk the controls but to no avail. The tram remained resolutely busted!
Were fbb alone on the platform, he would have stayed to watch the ultimate outcome; but, for reasons which are unclear, Mrs fbb does not share fbb's interest in viewing the rescue efforts for a failed tram. And fbb was under clear instruction to visit Tesco for his good lady wife's prescription.
She is half way through her six week crutch restrictions and thus still of significantly reduced mobility.
But as they drove off, the blue tram was very stationary half way along the platform!
It's excitement such as this that brings joy and delight to the humdrum lives of aged retirees.
Peco Publications Prints In Purple
Since almost ever, the Railway Modeller magazine has been printed with its cover highlights sequenced in blue, green and red. Recent years have seen red used every month but, much to the oldies' delight, the latest policy has been to go back to the three colour cycle.
Until now, that is.
The June edition dropped through the fbb letterbox and it is adorned by Platinum Regal Celebratory Purple. 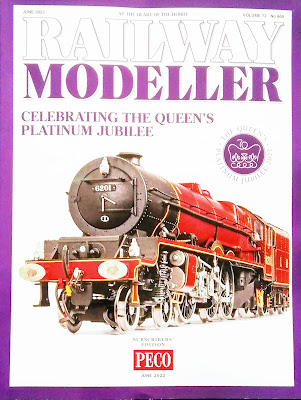 Sadly (?) the cover picture is NOT of the Severn Valley Railway repaint of the West Country class loco as No 70 (!) ... 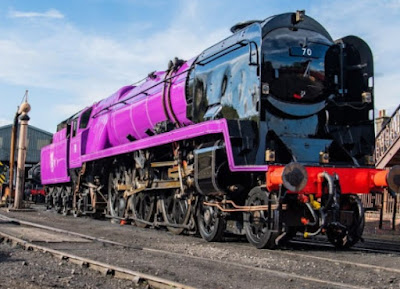 ... which "hits the shops" in the Autumn.
fbb guesses that the announcement of the repaint came too late for print deadlines.

Incidentally, has anyone worked out that, in June 2022, Her Maj will have reigned happy and glorious for 69 years, not 70. Work it out. Her first year of reign ended in 1953, so her 70th year of reign will end in 2023.
June 2022 is the 70th anniversary of her accession - so worth a good celebrate. Perhaps we can do it all again next year if the dear lady hangs on. But what Jubilee can it be? Platinum has been used.
Tantalum is a rare metal ... 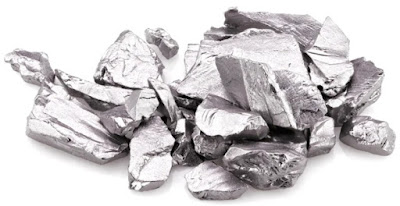 ... so a tantalising prospect.
In case you wondered (of course you did) a Diamond knees-up should be 75 years. It was Queen Victoria who deemed that her 60th should be diamond studded!
In 2023 the fbb's celebrate their Golden Wedding; 50 years since they were hitched, BUT only 49 years of wedded bliss.
Complicated is it not?
Crass Contravision Contribution
Arriva's view-blocking celebratory livery! 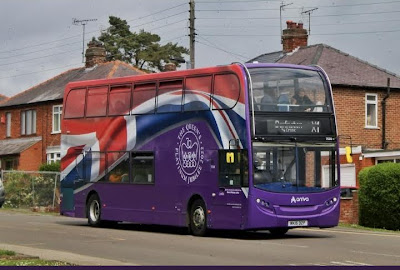 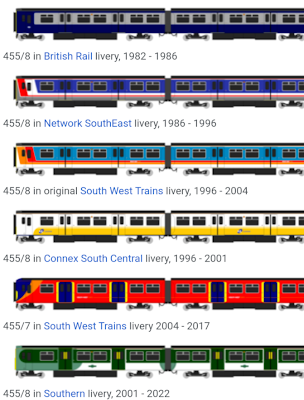 fbb cannot remember whether both versions of NSE blue were carried.
With the recent transfer of the South Western franchise to South Western Railway (First Group) the only change on their 455s has been to replace the SWT name on the side with SWR. 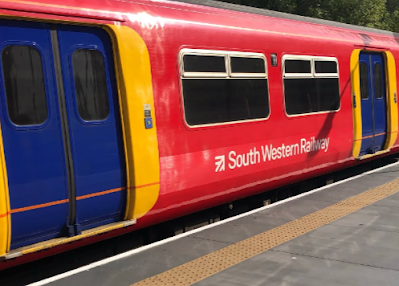 So not dramatic! On South Western, the 455s are due to be replaced with new class 701 units. These carry probably the most unappealing livery of any of the privatised train companies - ever! 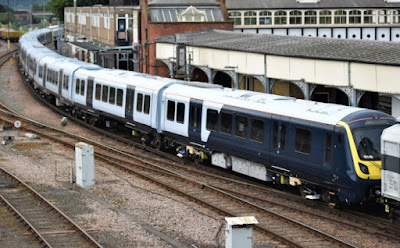 But this weekend (just gone) saw the final appearance of a 455 for Southern. 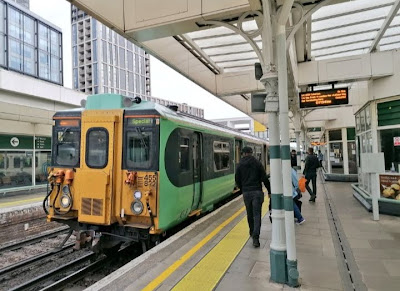 If Only It Were Simple!
fbb did wonder which particular tank wagon was modelled by Dapol for Molly The Cow. 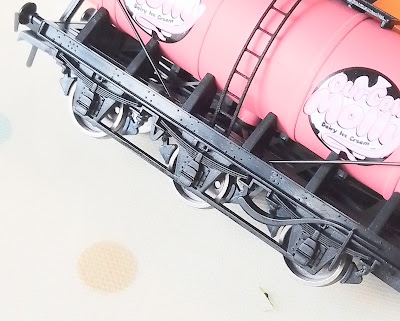 Now look at some chassis and the support for the tank on a selection of 12 inches to the foot wagons.
Not this one - different suspension.

Not this one - different suppots.

Not this one - different strapping.

Maybe this one - looks about right?

No, the supports are different!
But this model (a kit) looks almost exactly the same. 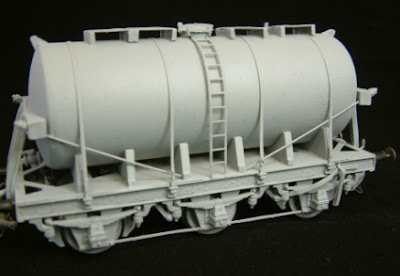 Oh, no! The walkway along the tank top is longer.
The problem is that the wagons were owned by the railway company who strapped the milk wholesalers' tanks on top. So there probably isn't any such thing as a standard milk tank wagon.
Thankfully, fbb is collecting the models but not seeking provenance for their design. "About right" is good enough!
And Finally!
fbb rather liked this tweeted poster design! 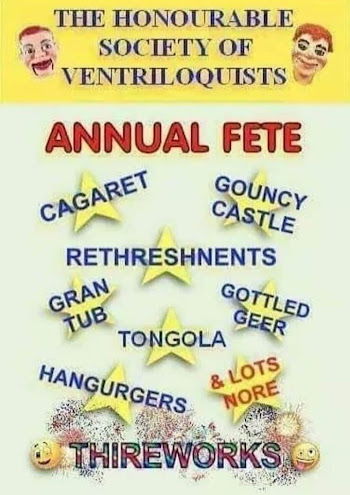 Tomorrow we are off to West Yorkshire
Next Keighley blog : Tuesday 17th May
Posted by fatbusbloke at 02:00